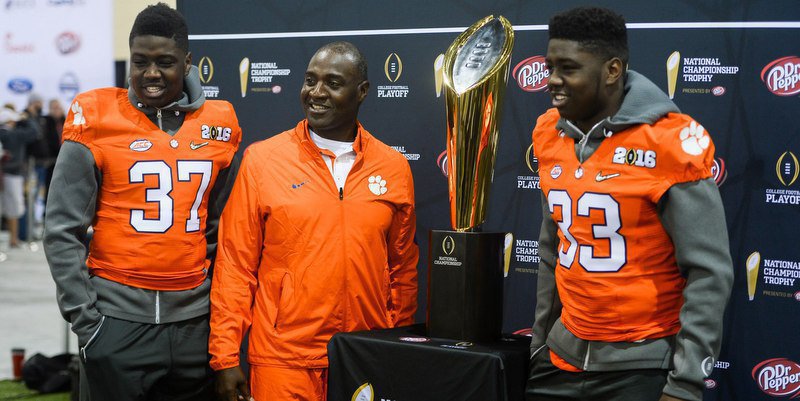 Jeff Davis has been able to experience the national championship journey with his two sons.

Father’s Day is a time to celebrate the men who have made an impact on our lives, and this year holds a little extra meaning for a man who is a father figure to an entire football team.

Clemson’s Jeff Davis is a recognizable face in the Clemson program. He burst onto the scene as one of the program’s all-time great players, helping the 1981 Tigers to the national title as an All-American and leading tackler from his linebacker position. He later returned in a fundraising capacity, helping raise major gifts when Tommy Bowden was head coach.

In his current position as assistant athletic director for player relations, Davis is responsible for fostering an environment of personal and career development for the student-athletes who represent Clemson University on the gridiron.

In that role, Davis is a father figure to many of the young men who come through the Clemson program, but he’s the flesh and blood father to two Tigers – linebackers J.D. Davis and Judah Davis. When Clemson made the trip to The White House and the Capitol Building last week to celebrate the National Championship, the moment was made even more special because Davis, nicknamed The Judge, got the share all of it with his sons.

“I’ve had the opportunity to just stand back and watch them,” Davis told TigerNet at the Capitol. “Not every parent has the opportunity to see their children become young men and I think for me to see them experience all of this at such a young age and so early, something that took me four years, it’s coming in their first two years with them going back-to-back is special. That along with the educational part.”

Davis said that football opens doors to the players that they regularly might not have, like the visit to Washington, D.C.

“This right here is what epitomizes football. It’s what football is all about. Football exposes so many young men to so many different opportunities that they would never have had if they were not been a part of this,” he said. “To experience this with J.D. and Judah is another way for them to understand the stock that we have in Clemson and to understand what that means and to understand that I’ve experienced it. I hope that I was part of creating the opportunity for them to experience and hopefully they’ll understand that they will do the same thing not only for their children but for others.”

Davis’ imprint is all over the P.A.W. Journey, an important part of Clemson’s new football operations center. Clemson head coach Dabo Swinney has placed an emphasis on developing their players as young men off the field. That’s what P.A.W. — or Passionate About Winning — Journey is all about.

• Striped, which focuses on personal growth

• C.U. in Life, which focuses on life skills and community service

• 5th Quarter, which focuses on career and professional development.

It’s something that is very important to Davis.

“P.A.W. Journey is a leadership initiative. It’s preparation. It’s preparation to create the same opportunity. I talk to our young men about success with class and I have an acronym for class,” Davis said “The two ‘SS’ stand for success and significance which means for them fulfill their goals and significance is when you help others fulfill their goals. That’s what P.A.W Journey is about - how they use their influence to empower others.”