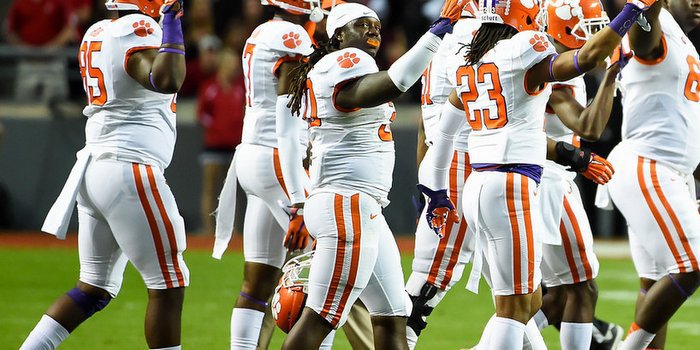 Williams celebrates with his teammates after the win over Auburn

CLEMSON – Two years ago Jalen Williams was ready to give up on his dream of playing major college football after attending multiple camps and not even so much as getting a sniff at a scholarship offer.

However, his luck turned around on one hot and steamy June day on the practice fields at Clemson, but he would’ve never made the trip without the consistent prodding from a high school coach.

Williams – who logged 34 snaps and had two tackles in last weekend's 19-13 win at Auburn – told the media earlier this week that before the trip he was fed up with the recruiting process.

“I didn't even want to come to Clemson's camp because I went to a couple of ACC schools before and they all told me I was too short. They told me I was too short and I couldn't play for them,” Williams said. “The Saturday morning of the camp, my coach called me and said, 'Come on, let's go to Clemson's camp.' I said, 'Coach, I want to go. They're all saying I'm too short and I don't want to do it.' He wouldn't take no for an answer and he came to my house and got me out of my house. He said, 'Just bring your cleats and let's go.' I'm from Columbia and it's a long drive. The whole way from Columbia to Clemson he was lecturing me talking about how it was a great opportunity and how I couldn't pass it up. He told me I needed to come out and perform. When I came out to camp, I was loose and I felt light and I played fast and I walked away from my offer.”

His high school coach at Blythewood (SC) convinced him to compete at Clemson and as it turns out defensive coordinator Brent Venables took notice of the 5-10 linebacker as he competed against 5-stars like Ohio State star Raekwon McMillan.

“He (Venables) told me that he was impressed that I could do it in person,” he said. “Everybody's highlight tape looks good, and everybody is going to make big hits on their highlight tape. Everybody's going to catch a pick and get a sack, but he said the biggest thing about camp was that you can do it in their face. It's like what can you do for me right now? For Coach V to be able to see me perform like that at camp and in his face, I think that really made an impression on him.”

The Columbia native said he’s spent time at all three linebacker positions, as well as nickel, and he just wants to contribute and help the team in any way possible.

After surprising many fans, Williams avoided a redshirt last season and quickly gained the trust of Venables and he said the time learning behind Ben Boulware has allowed him to take on a bigger role this season.

“My body type, I guess. The way I was raised. There are a lot of factors that play into that (playing multiple positions),” he said. “For you to be able to go out and guard the slide and then come in the box on third-and-short and play, it's just that. It's knowledge. Coach V always says that knowledge is power. The more you know, the better you are. Last year, when I was playing behind Ben at WILL, that helped me even though I'm on the other side of the ball now, it's helping me at nickel. I know what all of the run fits are so if I'm at nickel, and I don't know where I'm supposed to fit at, I can remember where I fit at WILL and I know that at MIKE Kendall (Joseph) fits off Ben, so I know I'm supposed to fit off Kendall. It's all three of us in there, so it all helps.”

Despite opening the season on college football’s biggest stage, Williams said at the end of the day it’s still the same game he’s played his entire life.

“It's fun. It's football at the end of the day,” he said. “You first go out there, and you like, 'Wow, there's 95,000 people,' but after you get that first hit on the opponent, it's just football. It's the same game I've played since Pop Warner and Blythewood, but the whole world is watching now, instead of just my high school and my parents. It's the same game.”