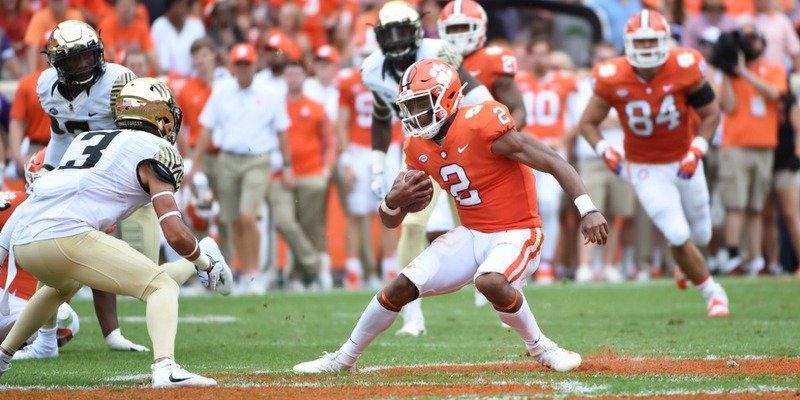 Kelly Bryant looks for yards against the Wake defense

The Tigers raced out to a 14-0 lead in the first quarter before sputtering on offense for much of the remaining three and gave up two late touchdowns to the Demon Deacons, but remain undefeated after a scrappy effort.

OFFENSIVE PLAYER OF THE GAME:Despite playing just two-and-a-half quarters due to injury, Kelly Bryant continued to be the streadying presence the offense needs. The Piedmont (SC) did throw an interception and have a fumble, but his numbers were impressive. Bryant finished the game completing 21-of-29 passes for 200 yards and a touchdown. He carried the ball 12 times for 39 yards.

DEFENSIVE PLAYER OF THE GAME:All of the talk coming into the season was about Clelin Ferrell, Dexter Lawerence and Christian Wilkins, but Austin Bryant continues to show why he shouldn’t be forgotten. After missing most of last season with a foot injury, Bryant is catching the attention of NFL scouts and personnel with his dominant play and athleticism. Bryant finished the game with seven tackles, two tackles for loss and a forced fumble.

Kelly Bryant looks for yards against the Wake defense"

Two quick scores: Clemson’s offense got off to a fast start scoring two touchdowns on its frist two possessions. Clemson made Wake Forest pay for electing to defer. The Tigers marched 75 yards in seven plays, that culminated in a 28-yard pass from Kelly Bryant to Deon Cain for a 7-0 lead two minutes into the game.

Wake Forest went three-and-out on its first series, and Clemson’s second series started on their own 24. Twelve plays later, Adam Choice bowled over several defenders on his way into the endzone for a 14-0 lead with 6:18 remaining in the first quarter.

Clemson’s Alex Spence missed his only opportunity of the day – a 43-yard try – after clanking it off of the left upright.

Newcomers shine: After Bryant went out with an injury and sluggish start for redshirt freshman Zerrick Cooper and the starters, Dabo Swinney and the offensive coaches turned the game over to the young payers.

Hunter Johnson immediately came in and led Clemson on a four play, 32 yard drive that ended with a 13-yard pass to Cannon Smith – the first scoring pass and catch of their careers.

Tee Higgins had three catches for 39 yards and caught a late onside kick attempt. Amari Rodgers had a pair of catches for 11 yards. Running back, Travis Etienne, had 15 carries for 67 yards.

Back-up defense: As Clemson undoubtedly prepares for the potential loss of three defensive linemen and two linebackers, Brent Venables turned things over to the second and third-team defenders, like he has five of the season’s first six games. The backups gave up two scores to make the game appear closer than it really was.

STAT OF THE GAME: Clemson now owns 65 wins over Wake, the second-most against any opponent (they’ve won 68 against South Carolina). The Tigers have also won nine in a row in the series, all under head coach Dabo Swinney. The win was Clemson’s 11th consecutive overall, 20 of the last 21 and 37 out of the last 39. They’ve also won 21 out of their last 22 against ACC teams, 20 in a row against the ACC Atlantic.

UP NEXT: Clemson travels to Syracuse for one the ACC’s Friday night matchups. The Tigers and Orange will kickoff at 7 p.m. in the Carrier Dome.

Wake Forest has an open week before they travel to Atlanta, Georgia for a cross-divisional matchup with Paul Johnson and Georgia Tech.