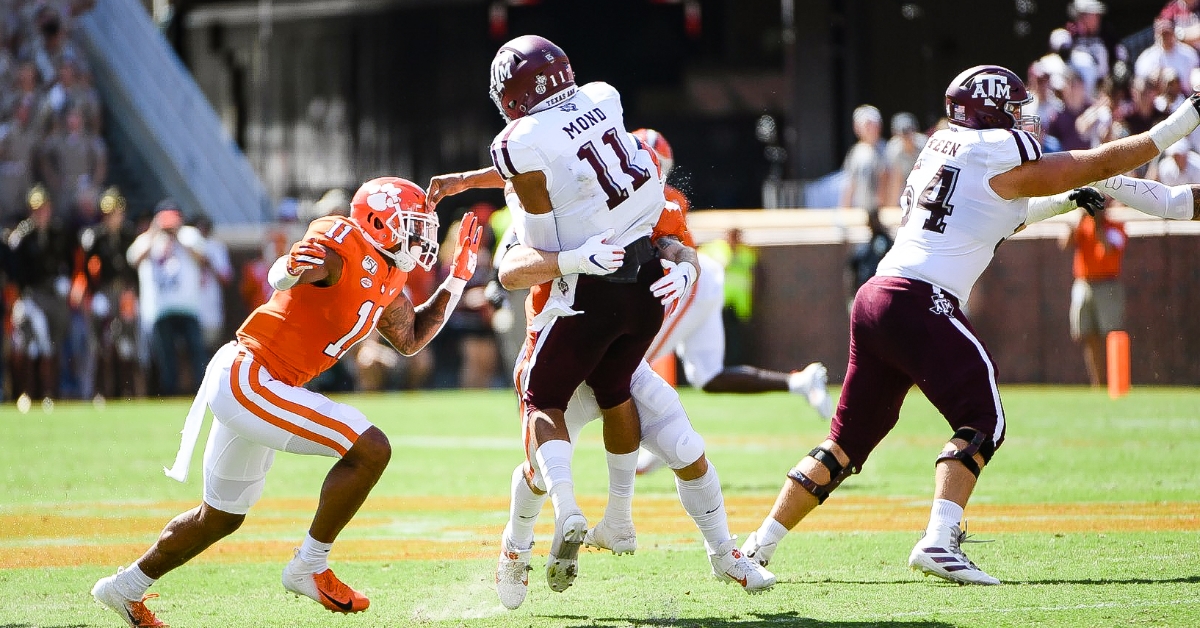 CLEMSON – All eyes were on top-ranked Clemson as the No. 12 Texas A&M Aggies came to town for a rematch after the Tiger’s narrow escape last year at Kyle Field.

Quarterback Trevor Lawrence knocked the rust off and Clemson had three players with over 50-yards receiving – Justyn Ross, Tee Higgins and Travis Etienne – while the defense made a statement holding Texas A&M to just 10 points.

OFFENSIVE PLAYER OF THE GAME: After appearing rusty last week against Georgia Tech, Trevor Lawrence found his rhythm in the second quarter and never looked back. He made tough throws look easy and probably should’ve had a couple of more touchdowns if it weren’t for a couple of drops by the wide receivers. Lawrence finished the game completing 24-of-35 passes for 268 yards, a touchdown and an interception. He also rushed for a touchdown.

DEFENSIVE PLAYER OF THE GAME: We’re so used to seeing Clemson defensive lines in the backfield and harassing quarterbacks, but Saturday’s game plan was a little different. Defensive coordinator Brent Venables was determined to keep Texas A&M quarterback Kellen Mond in the pocket and force him to beat Clemson with his arm. The defense kept the Aggie offense in check for most of the game and while the entire defense deserves the player of the game, that honor goes to K’Von Wallace. Wallace finished the game with nine total tackles – six solo – and a sack.

*Tigers take the lead: The Tigers responded in a big way after falling behind 3-0 in the second quarter. A 27-yard completion from Lawrence to Etienne put Clemson in A&M territory. On 3rd-and-11 from the A&M 30, Lawrence was flushed from the pocket and rolled the left sideline. The A&M defenders converged on Lawrence and he flipped the ball to a wide open Justyn Ross in the end zone for a touchdown and a 7-3 Clemson lead.

*Up by three scores: Both teams stumbled coming out of the half, but the Tigers put together a scoring drive midway through the quarter. A couple of big penalties and a 14-yard pass to Etienne set up the score. Dixon finished the drive on a counter play, scoring from four yards out to put Clemson ahead 24-3 with 5:50 to play in the third quarter. The drive covered 83 yards in just eight plays and took a little over two minutes.

*Muse denies touchdown: Texas A&M put together its best drive since early in the second quarter as the fourth quarter started and made it to the Clemson 11-yard line. On third down, Mond felt pressure from the up the middle and his pass to the goal line was intercepted by Tanner Muse, ending the threat and likely any chance the Aggies had of an upset.

STAT OF THE GAME: Texas A&M had nine penalties for 85 yards while Clemson only had three for 15 yards.

UP NEXT: Clemson travels to Syracuse next Saturday for a 7:30 p.m. matchup with the Orange (ABC), who lost 63-20 on the road at Maryland. Last time, Clemson played in the Dome, Syracuse shocked the world by beating the Tigers.