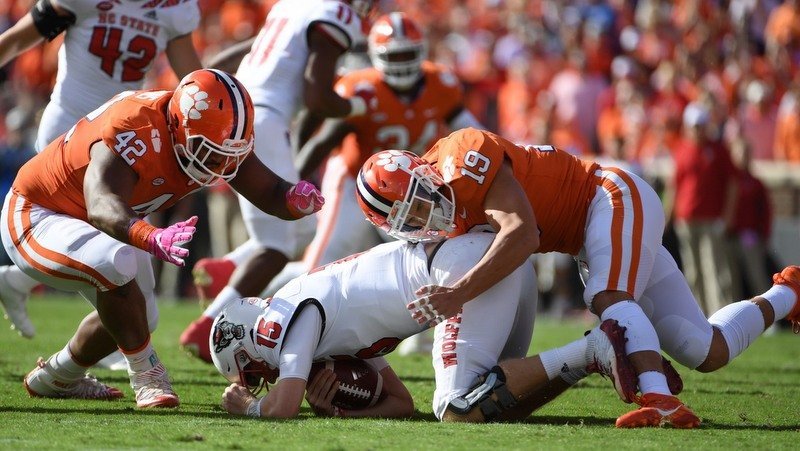 CLEMSON – The battle of unbeaten teams turned into a beatdown.

No. 3 Clemson held NC State scoreless for three quarters, smashing previously undefeated No. 16 NC State 41-7 in front of a sold-out Death Valley crowd Saturday afternoon. The Tigers improve to 7-0 overall and 4-0 in the ACC while NC State falls to 5-1 overall and 2-1 in the ACC.

The Tigers jumped out to a 24-0 lead at the half and never looked back in winning their seventh consecutive game in the series and 14th out of the last 15. The 34-point margin tied for second-largest in school history over a ranked team. The record remains 35 points (38-3) vs. Miami in last year"s ACC title game.

The Pack dared the Tigers to throw to the outside and freshman quarterback Trevor Lawrence made them pay, finishing the day 26-of-39 for 308 yards, the first 300-yard passing game of his career. Tee Higgins had a career-high eight catches for 119 yards and a touchdown.

"That’s two games in a row that we’ve put together a complete effort," head coach Dabo Swinney said. "That’s what we’re capable of doing. Our guys were on edge all week because we’ve had a lot of close games with NC State. I was actually worried about them peaking too early, but they were ready to play. I’m really proud of them.

“Our guys were locked in and committed to preparation all week long. That was a dominant performance today. NC State’s a good football team. We complemented each other in all phases of the game and put together a total team effort. We committed no turnovers on offense and forced three turnovers on defense. We had great energy from start to finish. We also played 85 guys and picked up the second-largest margin of victory against a ranked opponent for us.”

The Wolfpack won the toss and elected to put the defense on the field to start the game. The Tigers made them pay. The Pack played seven or eight defenders in the box, daring Lawrence to beat them through the air, and Lawrence used a 12-yard run and two passes to Tee Higgins to set up a three-yard scoring run by Etienne. With 11:23 remaining in the first quarter, Clemson held a 7-0 lead.

With the run, Etienne became the first Clemson player to score a touchdown in seven consecutive games since Wayne Gallman scored in eight straight in 2016.

The Tigers added to the lead late in the first quarter. Following a Pack punt, the Tigers traveled 75 yards in just six plays. A big third-down throw to Hunter Renfrow set up the score – Renfrow caught the third-down pass at the Pack 46, and on the very next play Tee Higgins ran a deep post with only a safety to beat and Lawrence put the ball on the money for the 46-yard scoring toss. With 2:59 to play in the opening quarter, Clemson led 14-0.

The Tigers missed out on a golden scoring opportunity midway through the second quarter. Clemson moved into the red zone and appeared to have a first down on a Lawrence slide, but the review ruled he was a yard short. Clemson sent out the field goal unit and appeared to run a fake, but holder Will Swinney dropped the ball and the Pack took over on downs.

NC State then put together its best drive of the half, moving to the Clemson 39. However, a quick snap on third down was fumbled by Finley and the defense recovered on the Clemson 46 with just over two minutes to play in the half.

Clemson made the Pack pay for the turnover, marching the 54 yards in just 1:29. Etienne finished the drive with a two-yard scoring run and the Tigers led 21-0 with under a minute to play in the half.

NC State elected to go for points instead of run out the clock and it cost them. On the second play from scrimmage, Finley’s pass was tipped in the air and intercepted by K’Von Wallace at midfield. Wallace managed to weave in and out of traffic and down the sideline, eventually settling for a 46-yard return to the Pack four-yard line with 19 seconds to play.

The half ended with a 28-yard field goal by Greg Huegel and the Tigers led 24-0 at intermission.

A desperation move by the Pack led to Clemson’s next score. The teams traded possessions to start the third quarter and the Pack faced a 4th-and-7 at their own 27. Instead of a punt, however, the Pack elected to try for a fake punt and the Tigers’ Denzel Johnson sniffed it out for a 5-yard loss.

Four plays later, Etienne scored from the one – his third touchdown of the day – and Clemson held a commanding 31-0 lead with just under four minutes to go in the third quarter. With the touchdown, Etienne becomes the first player in Clemson history to rush for three touchdowns in three consecutive games. Etienne is the third ACC player in the past 10 seasons with at least 3 Rush TD in 3 straight games, joining James Conner in 2014 and Tevin Washington in 2012.

The Wolfpack got on the board on the first play of the fourth quarter, a nine-yard run by Reggie Gallaspy, making it 31-7. The Pack attempted an onside kick and it was recovered by Nolan Turner at midfield. The Tigers turned that into a 37-yard Huegel field goal – the 50th of his career – and a 34-7 lead with 12:32 to play in the game.

The Tigers forced another Pack punt and Chase Brice entered the game in place of Lawrence, but the Tigers didn’t miss a beat. Clemson put together the longest drive of the day, covering 84 yards in just eight plays. Brice had a pair of 24-yard completions – one to Diondre Overton and one to Justyn Ross – setting up a two-yard run by Lyn-J Dixon for a 41-7 lead with 8:11 to play in the game.

Clemson plays at Florida St. next weekend in a noon matchup. The Seminoles improved to 4-3 overall with a win over Wake Forest Saturday.