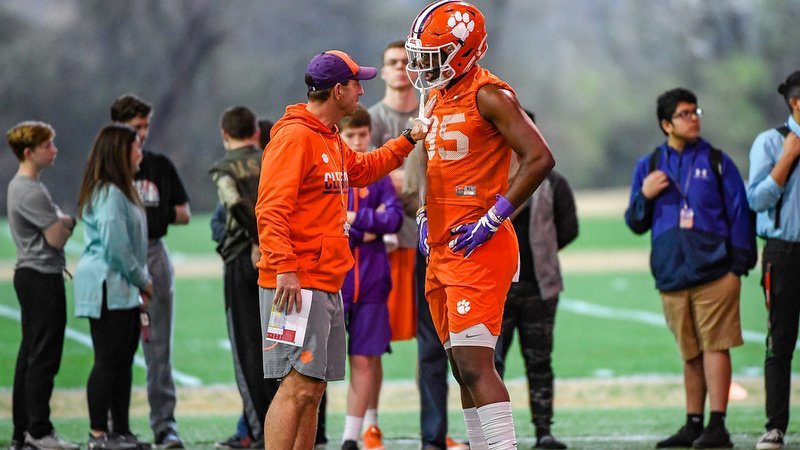 CLEMSON – Seven practices are in the books, and practice number eight will feature a full Saturday scrimmage.

The Tigers practiced for two hours in the indoor practice facility Friday afternoon as the weather continues to hamper outside work, according to head coach Dabo Swinney.

"Early morning in the morning, we will have a half-scrimmage. Not situational-type stuff but really let them play. It's day eight tomorrow, and I can't believe it," Swinney said. "We have been outside one day - it's rained twice, the first time for 20 days and the next time for 15. It's unbelievable. It's been a mess. We are so lucky to get in the work we've been getting. We've got a long way to go, but I love the energy. For every two good plays we've got three bad ones, but they are making progress. We have great ingredients, but we just have to put it all together."

*Says the coaching staff continuity plays a big part in helping the young defense. "It's one less box to check. The coaches are way ahead, and we don't have to worry about that."

*Swinney says he is really pleased with left tackle Jackson Carman. Said he still has work to do on his body, saying, "It's his worst asset, and it's his best asset. He is a very blessed person physically for his position and his craft. But he has loudly had a good seven days."

*Swinney says the offense wasn't efficient Wednesday and has a lot to clean up, while the defense gave up too many explosive plays. He says both sides have to improve but wants to see the younger players on defense cut down on the mental mistakes. He said the young defenders are going to be fine physically but have to work on the mental side of the game.

*Swinney says defensive tackle Xavier Kelly is a work in progress but has made a lot of progress. Says he has fewer mental busts and is taking pride in his opportunity.

*Kyler McMichael will be back Monday and should scrimmage next Wednesday. Same thing for Mario Goodrich.

*Swinney says he has to throw offensive players in at cornerback with McMichael and Goodrich out "just to save legs."

*Punter Aidan Swanson has to get stronger, but it's hard to tell much about the punting competition because the team hasn't been able to work outside.

**Tight end Jaelyn Lay, "looked like a fish out of water the first few days, but the last few days I haven't noticed him as much, which is good. It has slowed down a little bit for him. He is catching the ball better, and his breathing has slowed down. He is a pleaser, and he wants to please. He can draw it on the board and then all of a sudden you get out there and you panic and Coach (Danny) Pearman is yelling at you, and it's all downhill. But that's just kind of where he is, dropping him in the grease. But make no mistake, he is going to be something special. I have no doubt he will make big strides, but physically he is gifted.”