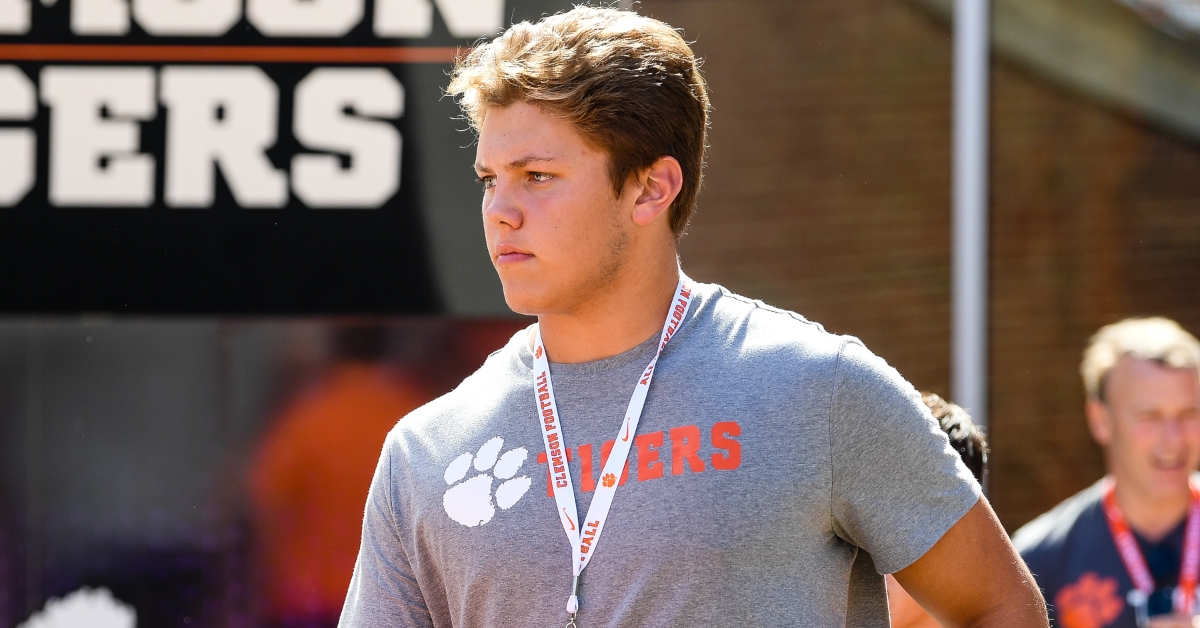 Rucci visited Clemson for the win over the Seminoles.

Recruits that spend time with Clemson head coach Dabo Swinney take the measure of the man, but spending time with his former players makes an even bigger impression.

Five-star 2021 offensive tackle recruit Nolan Rucci of Lititz (PA) Warwick visited Clemson this past weekend for Junior Day, and his family spent parts of three days on campus. Rucci (6-8, 270) is ranked as the No. 2 offensive tackle and No. 12 overall prospect in the 2021 class according to 247Sports.

“We drove down Thursday afternoon and got there Thursday night. We woke up Friday and did our visit on Friday and Saturday and drove to Tennessee Sunday morning,” Rucci told TigerNet. “Junior Day was Saturday but we wanted some 1-on-1 time with the coaches. We ended doing a lot of academic stuff as well in the morning. We got a chance to tour the engineering building and sit in on one of the classes. We are good friends with one of the professors at Clemson so we are able to get that unique experience to sit in on class. After that, we went back to practice.”

Then came some time with Swinney.

“Afterwards, we had a chance to sit down with Coach Swinney one-on-one with just our family and me. That was really cool,” Rucci said. “We probably talked for close to 45 minutes about football and recruiting and everything in between. It was a really interesting experience to kind of sit down with him. We had a chance back in October before the FSU game, but it was cool to sit down with him and it was reassuring. It solidified some of my beliefs about Clemson, that it is a really genuine program. I really enjoyed my visit there.”

What are his thoughts on Swinney after the conversation?

“It's really cool because what you see in interviews and what you see on TV is how he is as a person,” Rucci said “He is very genuine and open about his belief system and I really appreciate that. I think that kind of belief translates into his program as well. You can see it with his guys - through his beliefs they believe in him and they believe in the program. The system they have going on there is hard to replicate and very unique. That is a great recipe for success they have going on.”

Swinney held his “Decade to Remember” reunion Thursday night, and over 150 former players made the trek to Clemson for the event. Rucci and his family saw something special.

“That was pretty neat. And we were around some former Clemson players and we got to talk to a few of them. We asked them, 'Why Clemson?' And why they come back to a program they played for,” Rucci said. “It was really cool to see the different kinds of answers `and at the end of the day, they all loved their time with Dabo. There were even some guys who are on current NFL rosters, and to see that speaks a lot to the kind of program Coach Dabo runs.”

Former Tiger Kenneth Page was dismissed from the program in 2009 by Swinney, but came back for the reunion and spoke with Rucci.

The family visited Tennessee on Sunday.

“That was my first time there and I didn't go in with any expectations. I was really impressed with the facilities and they have some great academic programs,” he said. “That was cool to see. The program in the past couple of years hasn't been where they want it to be, but after talking to the coaches you can tell they have faith that they are going to get to where they want to be in the future.”

What’s next for the 5-star?

“It will be a busy spring trying to get all of my visits out of the way during the spring and then come to a decision by the end of June or beginning of July,” Rucci said. “That is where I would like it to be. At Clemson, we had a great time and Clemson is right there.”