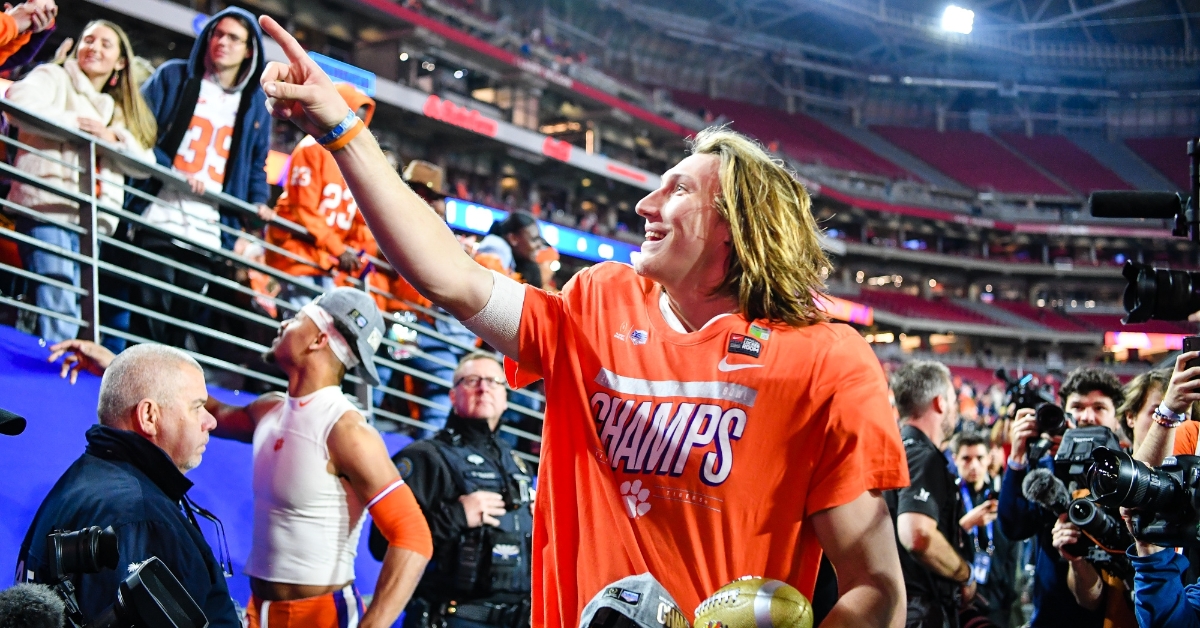 Trevor Lawrence points to the crowd after the win over Ohio St.

No. 3 Clemson trailed Ohio St. 16-0 early and trailed 23-21 late in the fourth quarter. With the ball on their own six-yard line, the Tigers had just three minutes to drive the length of the field for a go-ahead score. Once that was accomplished, the defense had to hold as the Buckeyes drove down the field late.

The Tigers held. The heart of a champion.

Quarterback Trevor Lawrence was almost knocked out of the game in the second quarter but came back to engineer the comeback victory.

“I think you look back to the North Carolina game and this game and we know it. Sometimes things are easy so some people don’t get to see it,” offensive coordinator Tony Elliott said. “We know what kind of young man he is. He’s a champion. He’s a champion on the inside which allows him to be a champion on the outside. He’s got ice water in his veins. He doesn’t panic. He’s a man of faith so he’s always calm and collected. He just believes that at the end of the day he’s going to figure it out and make a play to help his team win.”

Elliott said all of the players in the program have the eye of the Tiger.

“I think those that are close to the program know what type of young men we have,” Elliott said. “They know the character they possess. We talk about it all the time – the eye of the tiger, the heart of a champion. You know it when you see it and you know it when you don’t. These guys have embraced that and it’s why these guys have won 29 in a row and have the opportunity to play for another national championship against an unbelievable team in LSU, but it all goes back to the character of these young men, the resilience, the attitude and the belief that they had.”

Running back Travis Etienne had just 10 carries for 36 yards but led the Tigers with three receptions for 98 yards and two scores.

“I told Travis before the game – ‘At the end of the day, you’re going to be a difference maker,” Elliott said. “I don’t know how it’s going to be. You may have to run us to New Orleans or you may have to catch the ball.’ That’s something he took pride in and he had that mentality that he wasn’t going to be denied. Tee, as well. Tee Higgins went out for a while. J Ross (Justyn Ross), it seemed like every other play, he was coming out and going right back in. All of our guys, they weren’t going to be denied. They were going to find a way to play.”