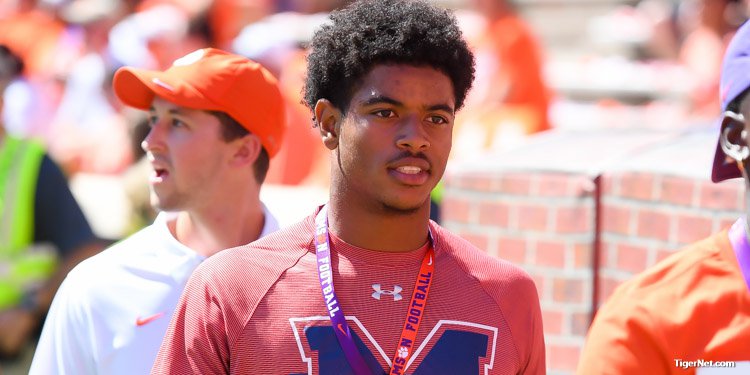 Charleston is the Tigers' first commitment for the 2019 recruiting cycle.

There are still 15 months before National Signing Day 2019, but Milton (GA) safety, Joseph Charleston already knows where he wants to play college football.

After trips to Clemson’s first three home games, Charleston found his home in TigerTown and became the Tigers' first commitment for the 2019 recruiting cycle.

The fact that Charleston avoided all of the fanfare that accompanies a commitment and ended the process early comes as no surprise to Milton head coach Adam Clack.

"He rarely talks about (recruiting) and he loves to have a good time with his team," Clack said last week. "He takes coaching from his coaches and is a heck of a competitor. He was willing to go ahead and commit early and shut the media circus down just speaks volumes of the type of young man that he is."

However, Clack said it was the family atmosphere and the environment that set Clemson apart from Charleston’s other suitors.

"I think that the defining thing about Clemson is the culture," Clack said. "I think he was really attracted to the positive environment to the player-friendly family. As an outsider looking in, that's what jumped off the page to me and I definitely think that was ultimately the deciding factor for him with so many other good choices."

In his commitment announcement last week, Charleston said that Clemson just stood out amongst the crowd.

“I would first like to thank God for putting me in the situation I am today," Charleston posted. "I would like to give a BIG thank you to my parents and family for supporting me through everything I do and raising me to be the young man I am today. I want to thank my brother for always pushing me and being my biggest competitor since we were little boys. I want to thank my coaches starting from Pop Warner all the way to high school. My position coaches and the whole i-dareu staff for developing me and taking my game to the next level. I would lastly like to thank every university that offered me and gave me an opportunity to play for them and to stay that I am truly honored...But one school sticks out from the rest. After many talks with my family and coaches, I am officially committed to CLEMSON University!!

While Charleston may shy away from media attention and the recruiting spotlight, Clack said he’s easy to spot on the football field.

"His defining characteristic is his explosiveness,” he said. “The way that he can arrive violently from a short space, whether its at the line of scrimmage and filling backside on a cut back run play, or shed a block and make a play, and then also be back on the hash and play the ball in the air and separate the receiver from the ball, I think that as a coach and an evaluator, those are the things that kind of you have it or you don't, and he has it in spades. That's probably what separates him and attracts a lot of people."

Charleston had 69 tackles including three for loss, four interceptions, six pass breakups, and a forced fumble in 2016.