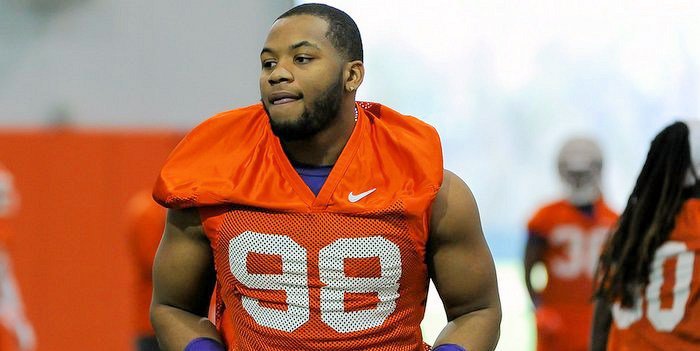 Dodd is excited for the chance to play linebacker

Kevin Dodd was in his car and on his way to Buffalo Wild Wings to watch the second round of the NFL Draft when his phone rang with a Tennessee number. Dodd stared at the phone for a second, blurted out to his friend that it was a Tennessee area code, and his friend implored Dodd to answer the phone.

He answered the call that changed his life, taking a call from Tennessee Titans General Manager Jon Robinson, who told Dodd that the Titans were going to draft him with the 33rd overall pick of the 2016 NFL Draft.

Dodd flew to Chicago for Thursday night’s first round festivities and was on hand to see Clemson teammate Shaq Lawson drafted by the Buffalo Bills with the 19th overall pick. Dodd’s name wasn’t called, however, and he elected to fly home and wait for the news surrounded by friends and family.

“Obviously, last night and yesterday were kind of devastating, but all of my plans were to try and find the brightness and the good in it,” Dodd told TigerNet in an exclusive interview after the call. “Chicago was an experience that I will never forget. Even though I didn't get my name called, it was a blessing to be amongst those guys who were getting their names called. I definitely embraced the moment and took it all in. I was disappointed but not broken. If I had to do it all again, I'd do it all again. I'd go to Chicago tomorrow knowing that I wouldn't go until the second round. It was just a blessing to be a part of that.”

Dodd arrived back home in Greer and tried to keep himself busy.

“Today, I landed back from Chicago. I was iffy on if I wanted to watch the draft or not because I didn't want to put myself through the stress of when I was going to get picked,” he said. “I knew I was going to get picked but I was just waiting. I was going to wait on the call instead of watching it and trying to figure out which team was going to call me. I came home. I worked out all day to keep my mind off of the draft then I came home and decided that I would just go to dinner with my family and my friends, so I called everybody to go to Buffalo Wild Wings on Woodruff Rd. When I was on my way to the restaurant to watch the draft, I got the phone call.”

It was Robinson and Titans owner Amy Adams Strunk.

“I looked at my friend and was like, 'Hey, this is a Tennessee number. It's a Tennessee number.' He was like, 'Pick it up. Pick it up.' They called and said and, 'We want to bring you along and have you a part of the organization.' I was like, 'Thank you! Thank you!' I am very appreciative,” Dodd said. “I was thanking them for every moment and everything they said. They said they called me the day before the draft and said, 'We know we told you to keep this phone call a secret, but the phone call we had the day before definitely paid off. We're glad to have you a part of the organization.'”

Although Dodd only started one full season at Clemson (2015), he made the most of it. Dodd racked up 12 sacks and 23.5 tackles for a loss last season, with his TFL total ranking second in the country. Lawson finished first with 25.5.

Now, he’s ready to get to work and try out a new position – the Titans want Dodd as a linebacker.

“I am very relieved. I'm excited,” he said. “I'm ready to go up there and get to work and see how this linebacker thing turns out. I'm excited that I actually get to play linebacker. That's definitely something I'll be looking forward to.”