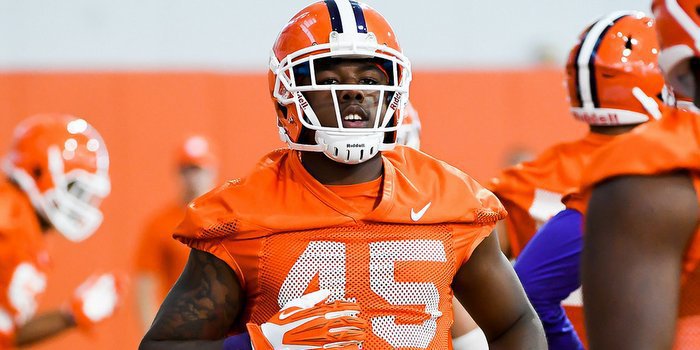 Register at practice earlier in August

CLEMSON – Perspective. It’s the word Chris Register is using as a guiding force this season.

Register, a linebacker at the time, arrived on Clemson’s campus in 2014 as one the top 300 players nationwide by different scouting services. He redshirted during the 2014 season and moved to defensive end prior to the start of 2015.

Register battled injuries last season and didn’t see his q1qqqqqqqqfirst action until the Miami game in October, breaking up a pass at the line of scrimmage in his four snaps. He would only play 10 more snaps the rest of the season, and his action this season should be his most extensive since his senior year of high school in 2013.

Register posted a solid spring and has opened eyes during fall camp, and he figures to be a part of the five-man rotation at defensive end in 2016.

His good work? He credits a new perspective for his success.

“Attitude. Perspective. Coach Swinney always tells us to pick a word and stand by it for a year and mine was perspective,” Register said. “Throughout the whole offseason, I just really locked in and kept all of the outside things on the outside and just focused on my work. I worked harder and kept a good mindset. I stayed in the books. I did everything that I didn't do last year that I should've been doing.”

Register says the decision to move to linebacker was his, but it took time to learn the technique associated with a new postion.

Register at practice earlier in August "

“I actually made the decision myself. At the time, I felt like it would be the best move for me and the team, also, so that's why I decided to do that,” he said. “It was pretty hard. It was tough. It took some learning and just locking in. It's not too different because playing linebacker, you're gap sound. We're a gap sound team, so going from linebacker to d-end, I kind of know what the linebacker's got. It was a transition technique wise. Playing down there, you're playing guys twice your size, 300-something pounds, and you've just got to technique them. That's what I had to work on and it took me like a year to get that down.”

Projected starter Austin Bryant went down with an injury earlier in camp, but Register said it didn’t change the way he practices even though he should see an increased role.

“I just kept doing what I've been doing. Everybody is just stepping up,” Register said. “We moved Christian Wilkins over. We've got Jabril Robinson in there. Everybody is just stepping up and pushing each other even harder. We were already pushing each other when Austin wasn't hurt. We just have to keep doing what we're doing and get ready for Auburn.”

Doubts are starting to creep in because of the Tigers’ limited experience at defensive end, but Register thinks his group will be just fine.

“I try not to listen to all of that, but we're all just working hard. Every day is a grind,” he said. “We're pushing each other. I push the man next to me. The next man pushes the man next to him. It's just going all the way down the line from the last person to the first.”

Clemson opens the season a week from today at Auburn and Register says he can’t wait for kickoff.

“Natural butterflies. It's football. This is what every high school player dreams of - playing in front of 90-plus thousand. It's special,” he said. “That's all I've been thinking about and making sure I stay to what Coach (Marion) Hobby is coaching us and what Coach (Dabo) Swinney wants from us. I get natural butterflies. It's part of the game. I just can't wait for it. It's going to be very fun and exciting.”

With his new perspective, a humbled Register is looking forward to the next step in his journey.

“I'm just taking it all in. It's been a long journey,” he said. “I'm very humbled. My mindset on things is a lot different and I feel like that's been a big key in my progress this past year.”