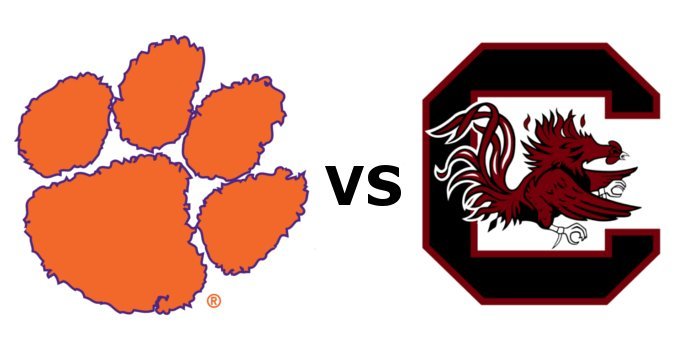 Clemson and South Carolina kick off at 7:30 p.m.

Big Thursday. Rivalry weekend. The Palmetto Bowl. Call it whatever you want, but Clemson and South Carolina get together again this weekend and it’s the only thing matters in the state.

It also has national implications as the No. 2 Tigers make another push for the College Football Playoff.

It’s orange britches and 63-17. It’s Never Again and Mike Williams giving rides and Perry Tuttle’s catch and a thousand other memorable moments along the way. Can No. 24 South Carolina pull off the upset at home? Can the Tigers keep their playoff hopes alive?

*Clemson has more wins (68) over South Carolina than any other school and those victories represent 9.4 percent of Clemson’s all-time victory total (727). When Clemson won in 2004 it was Clemson’s 600th all-time win.

*Clemson’s next win will be the 100th for head coach Dabo Swinney.

*Charlie Whitehurst is the only starting quarterback to lead a team to four wins in the history of the series. He did that for the Tigers between 2002-05. Deshaun Watson would have had the opportunity to do it if he returned for his senior year this year, but he turned professional and is now with the Houston Texans.

HOW SOUTH CAROLINA CAN WIN

The Gamecocks are a bit one-dimensional at times and struggle to run the football (they are 102nd nationally). That’s not a great recipe for a team facing one of the nation’s best defensive lines. However, Clemson has been susceptible in the screen game and with quick passes to the perimeter, which is an extension of the run game. If the Gamecocks can keep the Clemson defense honest and keep Brent Venables’ group on its heels, they have a shot.

A key stat to watch is third down. The Gamecocks are 63rd nationally on third down conversions (57-142, 40.14 percent), while the Clemson defense is fifth nationally, allowing just 48-174, or 27.59 percent. South Carolina has to be closer to their number than Clemson’s number.

Revenge also plays a factor. The Gamecocks feel abused and disrespected after the last three seasons. They feel like Clemson ran the score up last season. They feel like the last two timeouts by Clemson were blatantly disrespectful. They’ve talked a lot, and now they have a ranking and the home crowd on their side. If they can harness all of that and take it out on the field, they are dangerous. All of the numbers say this is an average team, at best, across the board. In rivalry games, the numbers don’t matter.

HOW CLEMSON CAN WIN

Clemson’s run game is averaging over 200 yards per game (217.45) this season, and they need to hit that mark, or come close, Saturday. South Carolina’s defense is 40th against the run but they’ve been better lately. Clemson co-offensive coordinator Tony Elliott doesn’t take advice from lowly scribes, but I would run Tavien Feaster and Travis Etienne, and then I’d run ‘em some more, and then I’d run ‘em some more. The Gamecocks don’t stray from their base defense too much, but if Clemson starts to gash them on the ground head coach Will Muschamp will bring an extra hat or two into the box and that’s when quarterback Kelly Bryant will have 1-on-1 matchups on the outside. Can Bryant be accurate enough to make plays?

The Tigers need to ride and survive that first wave of emotion. The crowd will be hostile, the other team will be chippy and emotions will be high. However, head coach Dabo Swinney said earlier this week that emotion only carries you so far, and at some point, it comes down to execution and blocking and tackling.

South Carolina has stayed in football games – and won football games – because they’ve been able to force the other team into turnovers. The Tigers can’t afford early miscues, and that’s why I think Clemson’s gameplan will be conservative at first. Some people are looking for a high-scoring affair, but I see this as being a game of field position and turnovers early. Clemson’s front seven has been dominant, yes, but the Tigers have also been susceptible in the secondary. That will lead to a big play for a score.

The Tigers will eventually find their rhythm offensively and the game will settle into a barrage of body blows. In the second half, talent and the depth chart begin to show and the Tigers eventually pull away. Blowout? I can see that. But we really haven’t seen this Clemson team step on someone’s throat this season, and I don’t see that changing Saturday.