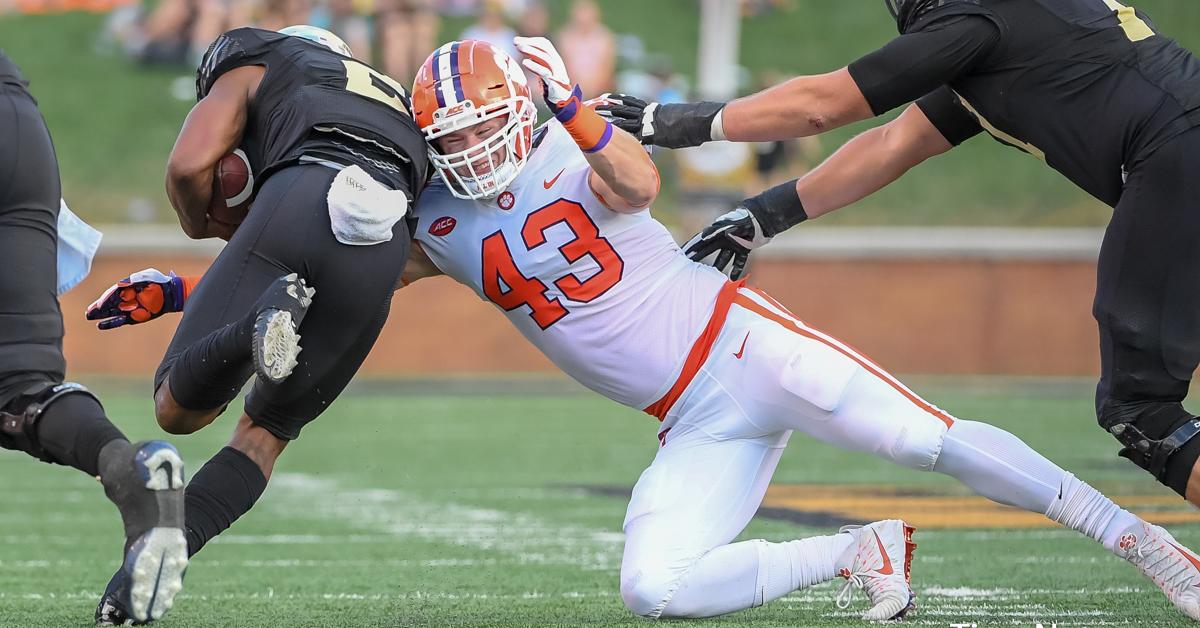 CLEMSON – Chad Smith message has a message for all of the doubters. The Tiger defense is still relevant.

However, Venables lost all four starters on the defensive line and two of his linebackers, along with several veteran backups, and the rest of the nation is in wait-and-see mode in 2019.

Smith, who will likely start at the weakside linebacker spot, thinks the train will keep right on rolling.

“I think so. I think after last year, obviously was a historic season, but we're coming into this camp with a chip on our shoulder,” Smith said. “We're not trying to rely on last year's success for this year's success - that's just not how things go. You can't carry over last year's touchdowns, last year's sack to this year. And we had a lot of great leaders leave. So, people are kind of doubting us a little bit, seeing how many big-time players left for the draft and all that. So, we kind of have a chip on our shoulder to prove that, 'Hey, we're still relevant. We're still here and we're going to make another run for it.’ That's kind of the mindset each and every day and continue to be who we are."

Smith takes over Kendall Joseph’s spot in the defense and he knows he has big shoes to fill.

"Kendall Joseph was an awesome, awesome player. A lot of people, I feel, underestimated him and how much he meant to the team and the defense,” Smith said. “He was kind of that vocal leader out there on the field, getting everybody lined up. He knew both Mike and Will like the back of his hand. Very smart player, very crafty player. Technically sound.

“So, it's obviously big shoes to fill, but we're not going to fill those shoes with just one person. We're going to fill it as a group. Jamie Skalski is doing a helluva job at Mike (middle linebacker) taking that spot right there and the same with Jake (Venables) and all of those other young bucks who are trying to push and vie for that role. It's kind of like we do it as a collective group of leadership. So, that's kind of the mindset that we have."

Smith is heading into his final season with a fresh mindset knowing he will likely be a starter.

"We're back at it again--just like that. We're attacking it each and every day, one day at a time,” he said. “Right nowm I'm at Will. Being here, going into my fifth year definitely helped a lot, knowing both, all three positions, Mike, Will and Sam. But I think the main difference is that your in the boundary, so everything happens a little bit quicker where Mike is a little more out in space—the field. So that's probably the biggest adjustment, but Coach V thought that I could be very useful there, that my strengths would be really good there."

The departure of Shaq Smith opened up even more room at the linebacker spot, and Smith says Venables told him right away to make the most of the chance he has.

"Just that you're the guy. You're it right here. Go make the most of it. It's an opportunity right there, so go make the most of it,” Smith said. “Either way, whether he was here or not, there's still an opportunity to compete every single day. So even if he's gone, there's other young guys trying to push for that job—everybody's trying to push for a job in camp. Ain't nobody got a job here yet. That's the mindset, that each and every day is an opportunity to solidify you as a person that can play more snaps each and every day. That's kind of my mindset going in, to take a job."