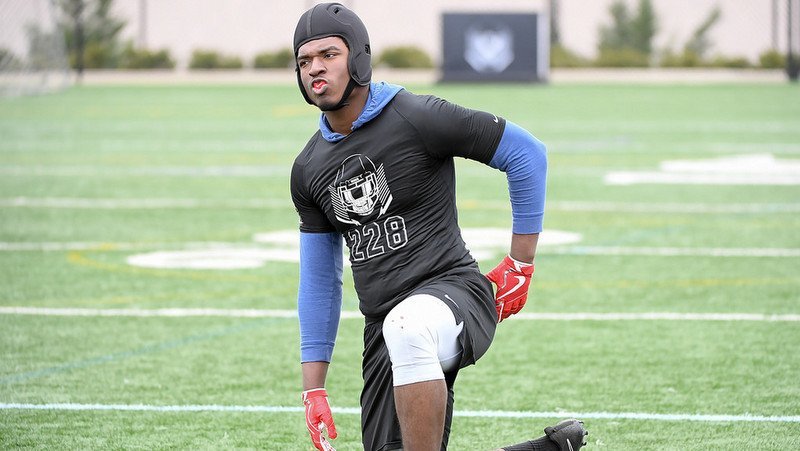 Eboigbe works out at The Opening

Brent Venables’ defense could be the key factor in 4-star recruit Justin Eboigbe’s decision on if he will expand his football career at Clemson.

Eboigbe, a 2019 defensive from Forest Park (GA), is ranked 141 nationally and ranked ninth as a strongside defensive end. With a long list of 27 offers from the top schools in the country, including Alabama, Auburn, Oklahoma, and Clemson, Eboigbe still considers Clemson in his top ten.

Eboigbe performed at the Opening Atlanta Regional and sat down to talk to TigerNet about what really stands out to him about Clemson.

“I hear from Clemson about every other day, I hear from coach (Todd) Bates and Coach (Brent) Venables the most,” Eboigbe said.

Eboigbe was recruited by Venables, who has been known to create close relationships with his recruits and players.

“It’s talking about family, and family is what it seems like at Clemson, it’s a big reason I like Clemson, the family.”

Venables has made an impression on the recruit, but so has his defense.

“Their defense, me being a defensive guy, and Coach Venables, what he did with the defense. They're basically a top of everything. That’s what really stands out to me,” he said.

Clemson has helped get many defensive ends to their next step in the NFL including Shaq Lawson, Malliciah Goodman, Vic Beasley, Andre Branch, Kevin Dodd, and Da’Quan Bowers. The idea of being coached by a coach that has helped players make a name for themselves on a professional level has influenced Eboigbe’s decision.

“It does, that is definitely a selling point for me, and being at some of the spring practices, seeing how they get after it, and how the competition level is high, they push you,” Eboigbe said.

Eboigbe’s last visit to Clemson was during Junior day, where he was able to talk to head coach Dabo Swinney and Venables in person.

“It was really great, I had a chance to talk to Coach Swinney, and being able to talk to coach Venables, and coach Bates in person really was special to me,” he said.

Clemson is currently high on Eboigbe’s list of 27 offers, but it is possible for them to move up to the two or three spot.

“I have them in my top 10 right now. It could change as time goes forward and I narrow my list down and see more of the program, but they are one of the top schools on my mind,” Eboigbe said. “Being able to see them more and building a relationship, even though there are tough days, when I’m thinking about I could be doing this or could be doing that, or a coach is getting on me, I still know that this is the best decision I could have made.”