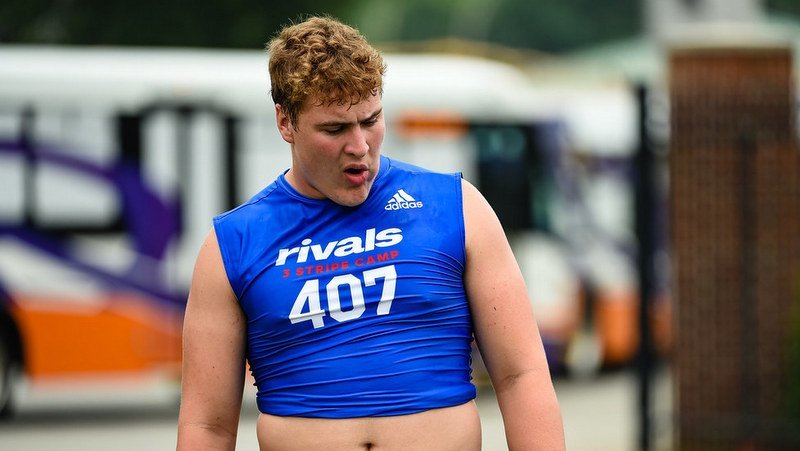 This trip, however, was all about recruiting.

“It was a lot different. I will say that Clemson is one of the only schools - other than Kentucky - that I’ve gotten to experience not being a recruit at and then being a recruit and visiting,” Burton told TigerNet. “The cool thing about Clemson is I really feel like they treated me almost the same way both times I went. They treat you well no matter what and it’s the same thing at Kentucky. They treated me well both ways. Another cool thing about being at camp was we got stay in the dorms. It wasn’t the football dorms but the dorms on campus for the overnight camp and I thought that was cool, too. It was the first time I had spent the night on a college campus and I thought that was a pretty cool experience.”

Burton took advantage of his three days on campus.

“It’s a really cool experience. The first few days I was there I got really close with Coach Caldwell and the guys. I talked to them,” he said. “Coach Swinney was always talking about get to know other people’s stories, so I talked to a few of the O-linemen and I got their whole recruiting story and how they knew when it was time to commit and things they really looked for and I think that will really help me moving forward to not focus on some stuff that’s hard to not focus on at some places and look at the long-term things and not the short-term things.

“I really like John Simpson’s story and Gage Cervenka. They both had pretty cool stories. The other one was Matt Bockhorst. He was probably my favorite guy that I’ve talked to. He kind of has a similar story to how Walker is committed to Clemson and he had a friend committed to Penn State. He was telling me how that is and all of that.”

Burton’s parents made the trip and came away impressed with what Clemson has to offer.

“My parents love it there. They love the Christian aspect of everything and they loved all of the coaches, even before we went on this visit,” Burton said. “They loved them from last time. My parents really love it down there.”

Swinney made the offer just as the group was preparing to head back to Kentucky.

“After camp was over, Coach Swinney finished talking so we were loading the buses and they called me and my family up there,” Burton said. “Me, my parents, Walker’s parents and Walker and my other friend are standing in this big circle and we’re just kind of talking. He asked me how long the car ride was home and I told him six hours. He goes, ‘Well, the six hours will be a lot easier knowing you have an offer from Clemson,’ so that was pretty cool. Me and Walker instantly hugged each other and it was an awesome moment. It definitely made the car ride a lot easier.”

“I’m going to try to choose before my senior season if the timing is right. If not, I’ll wait to decide where I want to go because once I’m committed somewhere, I’m not decommitting unless there’s a coaching change or something like that happens,” Burton said. “I’d like to choose before my senior season. I’m only going to two other camps - Alabama and Ohio State. I picked some good camps to go to - Clemson, Alabama and Ohio State.”

Parks is Burton’s best friend, but that doesn’t necessarily mean he would choose Clemson.

“I would say it means something but not in the fact of me making a decision,” Burton said. “I’m not just going to choose Clemson because Walker is going there. It’s a plus. It’s like having nice facilities. Walker is just an extra plus if I were to go to Clemson. He’s my best friend.”

After a great 3 days at camp I’m blessed to receive an offer from Clemson University! #ALLIN #GoTigers pic.twitter.com/KvEHFnvrCc