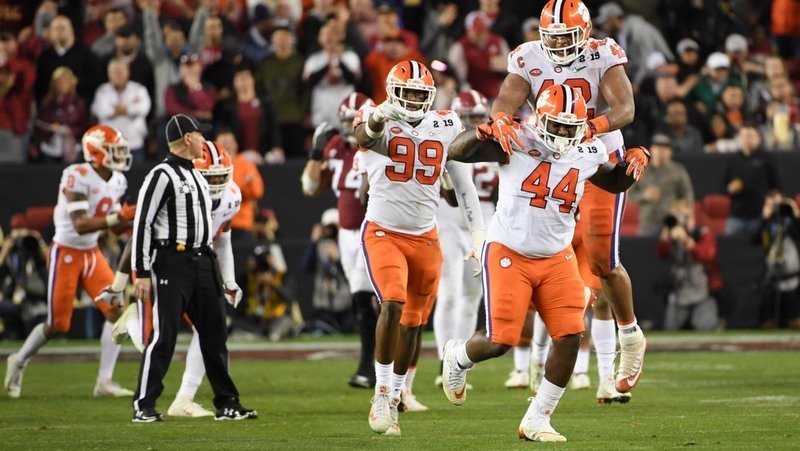 Nyles Pinckney (44) celebrates his tackle on the fake field goal

Clemson defensive coordinator Brent Venables was trying to make his way off the field after Monday night’s National Championship win over Alabama, but his smile wouldn’t get out of the way. Venables stopped to pose for pictures, conducted interviews with the few media members left on the field, and finally made his way to the tunnel that led to the locker room.

Hearing his name being shouted from the stands, Venables looked up to see 2019 linebacker commit Kane Patterson hanging over the railing, hand outstretched. Venables, play sheets rolled up in his hands, looked up at his future linebacker.

“Bam! How about that! Bam! Did you like that? What a game,” Venables shouted up at Patterson. “And I’ll see you Friday after you get moved in, and I can’t wait to coach you and let’s get started on another one of these for you.”

One of the early turning points in the national championship came when Clemson corner A.J. Terrell made an interception against Alabama quarterback Tua Tagovailoa and returned it 44 yards for a touchdown. Venables quickly pointed out that his strategy set up Alabama’s offense to throw the ball because of what Clemson did with its strong-side linebacker.

“We were in a cloud coverage, something we hadn’t really done going into the game, and it worked out to perfection,” Venables said.

Venables game plan was terrific - the Tigers shut out the Crimson Tide over the final 44 minutes, and stifled an offense that had won its first 14 games by an average of 31 points.

Alabama was just 4-for-13 on third down, and Tagovailoa 22-for-34 for 295 yards with two touchdowns and two interceptions. It was a heavyweight fight in which the champ got knocked out.

“We are 15-0, national champs, the best ever and we 'knocked out the champ to do it. Against the best offense I've been around, in Alabama, that I've ever seen,” Venables said. “To me, they were a little bit better than that Southern Cal offense back in 2004. This is a special performance after a special year. This is a great legacy that these guys lived out and I can't thank them enough.

“I think your character and leadership are revealed in those moments. It's easy to say but that's what it comes down to, a sheer will to win and compete and not to be discouraged or not to be denied and to find a way.”

Another big play occurred on the opening drive of the third quarter. The Crimson Tide drove deep into Clemson territory and attempted a fake field goal that was snuffed out for a two-yard loss. Venables said the Tigers knew the fake was coming.

“We stemmed to a Cover 2, which is no block. We went into the game knowing they would have a fake,” he said. “We showed one front and stemmed to another and played Cover 2 to it and sniffed it out. It was game plan specific just assuming that there might be a critical time in the game when they needed to seize momentum and make a play. The guys executed it to perfection.”

Later in the game, the defense stopped Tagovailoa on a 4th-and-goal play, and as his players came off the field, Venables let loose with a rare in-game smile.

“The smile comes from the amazing plays, but you know you have a chance to win these games against good people if you get field goals or no points at all,” he said. “You have a chance to run away with it, and we did that tonight. That was the climax of the moment, and those stops are something that take a sheer will to compete and that was the story of the game tonight.”

What did he mean by bam? It’s an exclamation mark.

“Bam is what an amazing performance our guys have had all year long, and now they have that kind of exclamation mark,” Venables said. “They already had that exclamation mark on their legacies and on their season and their career, but against Alabama, the champs, the standard in college football, the benchmark for how you play great defense, to have that kind of performance makes me so proud of our players.”

Venables loses several players off of the defense – replacing four starters on the defensive line and a senior leader in linebacker Kendall Joseph – and he was already smiling at the chance to build another great defense with younger players.

In other words, poor Clemson.

“Nobody will think we have a chance to have a good team next year with all of the players we lost, so poor Clemson again, right? Poor Clemson,” he said. “To me, to sustain success is the hardest part of life. You try to recruit the right kind of people to your locker room that get that, that have that work ethic, that value being a good teammate and value that education and the college experience and not use college just to go to the NFL. It's really about much more, and that is what the young men in our locker room understand they are signing up for when they come to Clemson.”