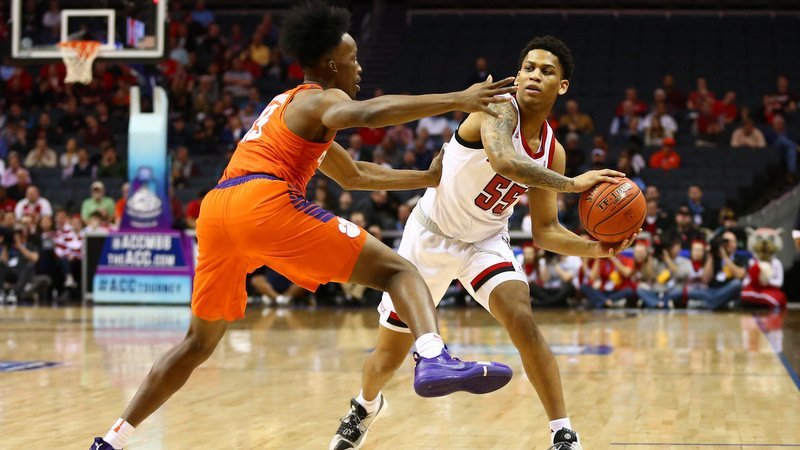 Clemson lost by one point in the ACC Tourney Wednesday (Photo by Jeremy Brevard, USAT)

CHARLOTTE, NC – Marcquise Reed sat in a chair just inside Clemson’s locker room door with tears in his eyes, Shelton Mitchell sat in front of his locker and scrolled through his phone with a look of shock on his face, and Elijah Thomas faced the media with his usual stoic look.

It a scene that’s been repeated time and time this season – the Tigers have lost six games by two points or less.

Markell Johnson’s two free throws with 2.6 seconds remaining lifted NC State to a 59-58 victory over Clemson Wednesday in the second round of the ACC Tournament in Charlotte, dealing what might be the death blow to the Tigers’ NCAA Tournament hopes.

The Pack (22-10) moves on to face top-seeded Virginia on Thursday. Clemson (19-13) might have had its NCAA chances end, but all three players insisted they deserve to be in the NCAA’s.

Mitchell said he felt what everyone else was feeling as time expired.

“I think it was like everyone else's reaction at that time - we fought hard, and it just didn't go in our favor,” Mitchell said. “I don't know (what it does for the tourney chances) because I haven't listened to what everyone else was saying. We weren't paying attention to that. We were just trying to win the ACC Tournament.”

Mitchell then said the Tigers deserve a spot in the field.

Reed said the Tigers now have to sit back and wait.

Reed echoed Mitchell’s comments about the Tigers belonging in the NCAA.

“For sure,” Reed said. “You look at our schedule, and we've played the best teams and went down to the wire with them, and it comes down to a one-possession game so I think we can play with the best at the end of the night. But the game is over with now, so we just have to sit back and wait for Sunday. It’s frustrating, but that’s all we can do at this point.”

Thomas said it’s frustrating to know the Tigers had control of their own destiny but lost that control in the close losses.

“We have a great group of guys and a great group of young guys, and we are going to be ready for whatever happens next,” Thomas said. “We can't hold our heads; we just have to stay focused and stay ready for whatever's next on our agenda. I feel like we belong in the tournament, but at the end of the day you have to beat the best teams, and we haven't done that this year so it's not in our hands.”