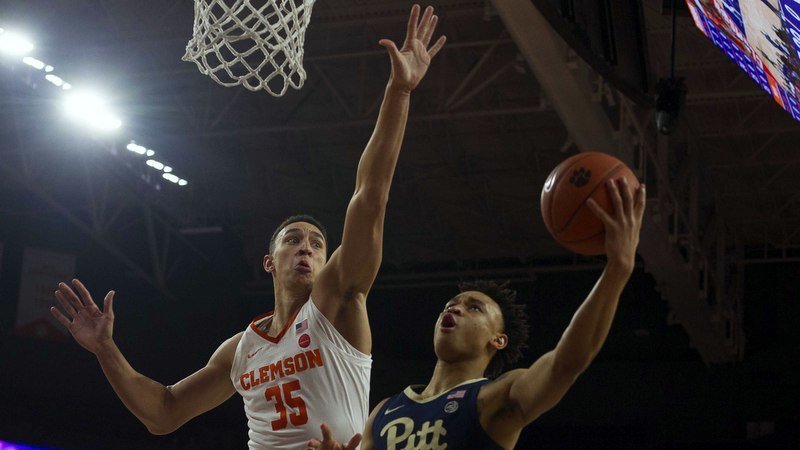 Javan White gets the early block for the Tigers (Photos by Josh Kelly, USAT)

CLEMSON – Much of the country is locked in a polar vortex that has brought snow to people around the nation. In Clemson, a hot streak made it rain 3-pointers.

Marcquise Reed scored 26 points and Clemson, which didn’t hit a 3-pointer in a loss to NC State last weekend – hit 14 3-pointers in defeating Pitt 82-69 Tuesday night in Littlejohn Coliseum, the fifth consecutive victory for the Tigers in the series against the Panthers. Clemson improves to 12-8 overall and 2-5 in the ACC, while Pitt falls to 12-9 overall and 2-6 in the ACC.

Clyde Trapp added 16 points and Shelton Mitchell scored 14 for the Tigers, who were 14-of-27 from 3-point range.

"I thought our last two days have been really good in practice," head coach Brad Brownell said. "We played like a team that really wanted to do well, and I liked our focus in the first half. I thought our defense was really good, we shared the ball and made threes. When you shoot the ball like we did tonight it looks good. I was happy to see us bounce back from a tough loss at NC State."

The Tigers came out on fire. Mitchell hit a 3-pointer 20 seconds into the contest, and Reed made one 38 seconds later for a quick 6-0 lead. The Panthers got back on track and made it 8-5, but the Tigers went on a 14-0 run over a four minute span, punctuated by a Javan White dunk, and led 22-5 with just over 12 minutes remaining in the half.

The Panthers climbed back to within 15 at 27-12, but the Tigers went on a 15-6 run that was highlighted by two more 3-pointers from Mitchell and another from the corner by Clyde Trapp. The run extended the Clemson advantage to 42-18 with just under five minutes remaining in the half.

Trapp hit another 3-pointer at the 2:06 mark to put Clemson ahead 47-20, but the final two minutes were marked by foul trouble. Clemson finished the half 10-of-11 from the free throw line and 9-of-15 from 3-point range in taking a 51-23 lead at intermission.

The 51 points were the most scored by Clemson in the first half this season.

The Panthers steadily chipped away the big Clemson lead in the second half. Pitt scored the first five points of the second half and trailed by 23 at 51-28. Midway through the half, the Tigers went five minutes without scoring a point and the Panthers went on an 8-0 run, making it 60-41 Clemson with just over 10 minutes to play.

Brownell called a timeout, and Trapp hit a 3-pointer off the glass from deep that pushed the lead back to 63-41. However, the Panthers scored the next five points and timeout was called with Clemson leading 63-46 with 7:37 to play.

The Tigers then went on a 17-10 run, highlighted by 3-pointers from Trapp and Reed and a layup by Reed that forced a Pitt timeout with Clemson leading 80-56 with just 3:10 left on the clock.

The Tigers were able to run out the clock as the Panthers failed to threaten again. Clemson returns to action Sunday, hosting Wake Forest at noon in Littlejohn Coliseum.

Clemson vs. Pitt boxscore
Get the latest Clemson gear right here!
Comment on this story