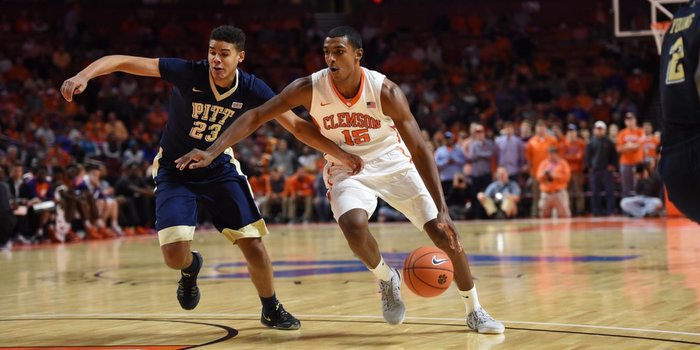 Donte Grantham thinks the Tigers can make the NCAA Tournament

CHARLOTTE, NC – All In is a term usually reserved for football, but Tiger forward Donte Grantham used it Wednesday morning to describe Clemson basketball and how he thinks this year’s squad can make the NCAA Tournament.

The 15-team ACC held its preseason media day Wednesday in Charlotte, where league coaches and players discussed the upcoming 2017-18 season.

The ACC posted a record nine NCAA Tournament bids last year, nearing its post-expansion goal of reaching double figures, but Clemson wasn’t one of the nine and hasn’t reached the tournament since head coach Brad Brownell’s first year in 2010.

Grantham told the media Wednesday that he thinks this can be the year because the team is filled with players who are All In.

“I think this is the year we can make it back to the NCAA because, one, we've got great leaders in myself and Gabe, and number two, we've got everybody on the team is all in and dialed into our team. So guys are really working hard, and we're taking it day by day, getting better at the things we need to get better at. Guys are really inspired and really ready for the season to come up.”

“I believe so. I think we have a lot of good pieces,” DeVoe said. “I think between Eli in the post and Donte and our guard play, I think we'll have a great year.”

Grantham said that with the graduation of leading scorer Jaron Blossomgame, multiple leaders are stepping into the void.

“The leadership is coming from guys like me and Gabe DeVoe, Shelton Mitchell,” Grantham said. “There's a lot of guys on the team who's really experienced, Mark Donnal, just having that voice. Jaron had a big voice for us, but me and Gabe, we were very experienced players, played in a lot of games in the ACC and a lot of places in the ACC. Just helping the young guys really develop and stay inspired, staying positive for the whole team.”

The Tigers finished last season 6-12 in the ACC and 17-16 overall, losing in the first round of the NIT to Oakland, and Grantham said the team has to figure out a way to win the close games.

“Yeah, it weighed on us heavy last year. We knew that we were in every game last year,” he said. “We were a great team, just had to figure out a way to close games. But I think this year for us it's just staying dialed in defensively and just because we have a lead doesn't mean we can ease up. So I think that's going to be a big thing for me and Gabe especially being experienced players and experiencing that last year. Just really gotten the team through adversity and really just dialing in defensively.”