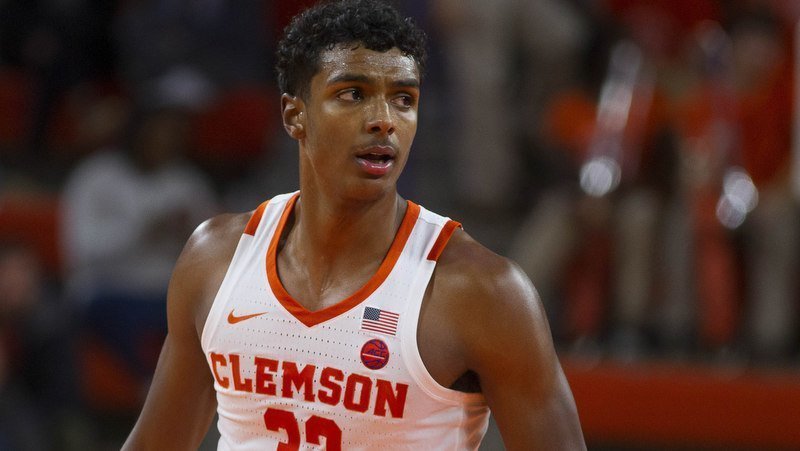 Grantham will still be counted on as a team leader

CLEMSON – Brad Brownell expects Donte Grantham will continue to have an impact on the Tigers’ season, even though he won’t be on the court.

After all, as Brownell told the team Monday, “Donte didn’t pass away. He just has an injury.”

Grantham, a senior forward, suffered a torn ACL in the second half of Clemson men’s basketball’s victory over Notre Dame on Saturday, Jan. 20. Grantham is out for the remainder of the season.

Grantham ranked second on the team in points (14.2 ppg) and rebounds (6.9 rpg), while tallying the third-most assists, second-most blocks and fourth-most steals. He also was shooting an ultra-impressive 56.0 percent from the floor and 42.0 percent from 3-point range.

The Tigers will have to adjust to life without Grantham in a harsh environment – No. 17 Clemson travels to Charlottesville to take on No. 2 Virginia Tuesday night. The Cavaliers are 18-1 overall and 7-0 in the ACC. Clemson has lost six in a row in the series, and Brownell says that players like Aamir Simms and David Skara will have to step into Grantham’s spot.

“There will be guys that will certainly take his minutes, that part isn't hard. But it is a tough one because he is a terrific player and he is a huge leader on this team,” Brownell said. “He does way more than the 14 points and seven rebounds that he scores. He impacts our team in a lot of ways, whether it is getting the ball in on the inbounds, passing, driving, or facilitating. And he is different than some of the players we play against and he gave us an advantage in certain situations. I am just more disappointed for him because he wanted to continue his senior year and take this team to the tournament and see how we did.

“In terms of basketball, Aamir and David will play that position the most. Both guys are certainly capable of playing good basketball and doing some of the things that we need them to do to win games. And because David might play more at that position, that means Scott Spencer, Clyde Trapp or A.J. Oliver could begin to get a couple of minutes here or there. We have to make sure that everybody is ready. The guys that haven't played much will get some opportunities in certain games.”

Despite the loss of Grantham, Clemson is 16-3 overall and 5-2 in the ACC. The Tigers also stand at No. 6 in the nation in RPI and are on course for at least a 20-win season. Brownell laughed when one reporter asked about Saturday's win over Notre Dame, saying, "Did we win? There's been a lot of things written. I didn't even know that."

The Tigers are tied for third in the ACC standings, and Brownell said Clemson can still accomplish great things.

“The season has to go on and we are capable of still having a great year and doing great things,” he said. “Donte didn't pass away, he just has an injury. He is not going to be able to help us on the court but he can help us on the sideline and at practice and in encouraging guys. We just have to readjust a few things. It's a piece of adversity we have to battle through. “