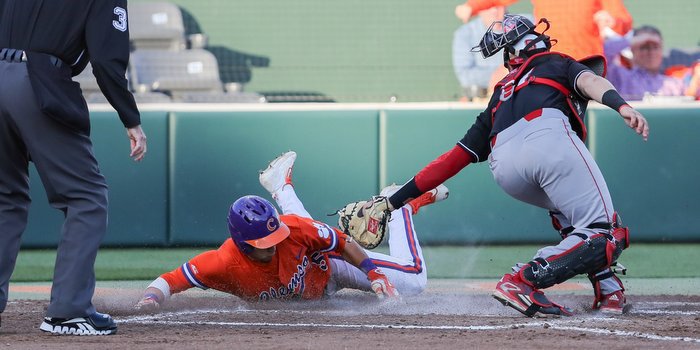 CLEMSON – Friday night’s series opener against North Carolina St. was a typical Clemson baseball game as the Tigers fell behind early but came back to win over a ranked team.

The Tigers and starter Charlie Barnes ran into first inning trouble and an early deficit, but Seth Beer drove in three runs and Chase Pinder drove in two and scored two as Clemson defeated the ninth-ranked Wolfpack 10-5 at Doug Kingsmore Stadium.

Beer had three hits and was on base four times.

Clemson head coach Monte Lee said he was anxious to see how his team would respond after tough first and second innings.

"What an interesting game," Clemson head coach Monte Lee said. "Obviously, we got behind early. A big inning in the first. We made a couple of errors in the second. I am thinking 'boy we got to get this thing turned around, and we got to get it turned around in a hurry.' Then we throw up six runs in the bottom of the second inning. Just really got some momentum going. Overall I thought we played really, really well if you take the first inning, the big inning, and the two errors we made in the second. From the third inning on, pitching-wise and defensively we played really well."

Barnes ran into trouble in the first. A single and walk led to a two-out, three-run homer from Preston Palmeiro for a 3-0 Wolfpack lead. The homer was the sixth of the season for the son of the former major leaguer. 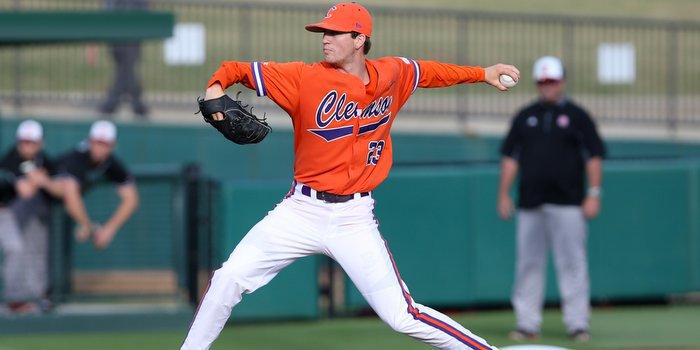 The Tigers answered in the bottom of the second. Okey led off the inning with a walk, and he moved all the way to third on a wild pitch that bounced to the screen. Reed Rohlman walked on four pitches, and Robert Jolly smoked the first pitch into left to score Okey to make it 3-1. Both runners advanced on another wild pitch, and Rohlman scored on a groundout by Eli White, making it 3-2. Andrew Cox singled up the middle to score Jolly to tie the game at 3-3, and Cox stole second.

That brought up Pinder, who singled up the middle to score Cox and Clemson held a 4-3 lead. Pinder’s single chased State starter Cory Wilder, and Wilder was replaced by Sean Adler. Adler was greeted by Wilson, who dumped a soft fly down the right field line that turned into a double and Pinder came all the way around to score on the play, making it 5-3 Tigers. Beer followed with an RBI single to center to score Wilson, and the Tigers had a six-run inning and 6-3 lead.

The Tigers added to the lead in the bottom of the fourth. White walked and moved to second on a ground out. Pinder was hit by a pitch and Wilson sacrificed both runners to second and third. That brought up Beer, who lined a two-run single to right-center for an 8-3 Clemson lead.

Meanwhile, Barnes went into cruise mode as the Wolfpack failed to muster any kind of threat through five innings. That ended when Brett Kinneman hit a two-out, opposite field homer to right in the sixth to make it 8-4. Two more runners reached base, but Barnes struck out Stephen Pitarra to end the inning.

Barnes earned the win and improved to 4-4 on the season. He went six innings, gave up seven hits, four runs (all earned) with two walks and six strikeouts. He threw 90 pitches.

The Tigers loaded the bases with no outs in the seventh, and Pinder flied out to deep left to score Maleeke Gibson for a 9-4 Clemson lead. Gibson pinch-ran for Jolly, who singled to short to lead off the inning. Wilson followed with a sacrifice fly to right that scored White for the Tigers’ 10th run of the game and a 10-4 lead. That brought up Beer, but Cox was caught stealing to end the inning.

Alex Eubanks replaced Barnes to start the seventh and pitched the final three innings to pick up his second save of the season.