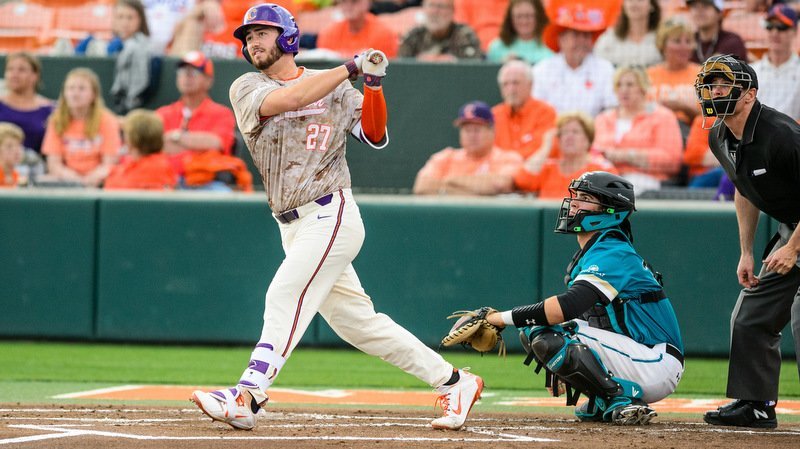 Williams admires his homer to left (Photo by David Grooms)

CLEMSON – Clemson hit four homers and Spencer Strider took a no-hitter into the seventh as the No. 6 Tigers defeated No. 18 Coastal Carolina 6-1 at Doug Kingsmore Stadium Tuesday night in front of a sellout crowd on Military Appreciation Day.

Strider threw 6 2/3 innings, giving up just one hit, one run (earned), while walking three and striking out seven. He earned the win and improved to 3-0 on the season. Clemson improves to 23-6 overall while Coastal falls to 21-10.

Jordan Greene, Logan Davidson, Chris Williams, and Grayson Byrd each homered for the Tigers, who had just six hits.

Clemson hit into its first double play to end a threat in the first, but Williams put the Tigers on the board leading off the second. Williams turned on a 2-1 pitch and launched it off the roof of the Chapman Grandstand for his seventh homer of the season and a 1-0 lead.

Clemson hit into two more double plays over the next three innings and Williams’ homer was the game’s only hit until the bottom of the fifth.

Kyle Wilkie walked to lead off the inning and after one out Greene stepped to the plate. Greene turned on a 1-0 pitch and hit it over the wall in left for a 3-0 Tiger lead. It was the second homer in as many games for Greene, who entered the season with one career homer to his credit. The Tigers weren’t done – Davidson took a 0-2 pitch and lined it into the bleachers in left for his fourth homer of the season and a 4-0 Clemson lead.

That was the end of the day for Coastal starter Trevor Damron, who gave up four runs in 4 1/3 innings. He was replaced by lefty Jay Causey, who retired Seth Beer and Patrick Cromwell to end the inning.

Strider was magnificent, not giving up a hit until the seventh. With one out and a runner at first, Lee Sponseller lined a single to right to break up Strider’s no-hit bid. Beer kicked the ball in right and Sponseller thought the runner at second would break for third, and Beer’s throw to Davidson at short was relayed to first, where Williams tagged out Sponseller for the second out.

Kieton Rivers singled to left and the run scored to make it 4-1, and Strider’s day was done. He was replaced by Alex Schnell, who got out of the inning without further damage.

It didn’t take the Tigers long to get that run back, and more. Byrd led off the bottom of the seventh with a solo shot over the wall in left, his fourth of the season, for a 5-1 lead. Greene followed that with a single to left and he scored on a double to left by Beer for a 6-1 lead.

The Chants chased Schnell in the ninth, putting runners at first and second, but Travis Marr came in and stopped the threat.

Clemson travels to South Bend to take on Notre Dame for a three-game series starting Friday.

Clemson vs. Coastal box score
Get the latest Clemson gear right here!
Comment on this story