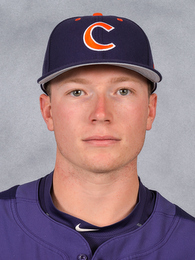 2015: Had a 2-0 record, one save and an 8.41 ERA in 11 relief appearances ... in 20.1 innings pitched, he allowed 21 hits (.259 opponents’ batting average) and 15 walks with 14 strikeouts ... did not throw a wild pitch ... held opponents to a .143 batting average with the bases empty ... in 10.2 innings pitched over four February relief appearances, he was 1-0 with one save, an 0.84 ERA and a .139 opponents’ batting average ... pitched 2.0 hitless and scoreless innings in relief with one strikeout against West Virginia on Feb. 14; was his first career appearance ... pitched 3.0 perfect innings in relief with two strikeouts to earn his first career win in the first game of a doubleheader against Maine at Augusta, Ga. on Feb. 21 ... pitched 4.0 innings in relief, allowing two hits, no runs and one walk with one strikeout to record his first career save against No. 10 South Carolina on Feb. 27 ... pitched 2.0 innings in relief, allowing no hits and no runs with four strikeouts to earn the win at Western Carolina on March 24 ... played for Florence in the Coastal Plain League in the summer, where he was 1-2 with a 4.24 ERA, .246 opponents’ batting average and 18 strikeouts against 15 walks in 17.0 innings pitched over eight relief appearances.

Before Clemson: Two-time all-state selection at the AAAAAA level ... state and region pitcher-of-the-year as a senior ... member of the state championship team as a junior ... member of the region championship team as a sophomore, junior and senior ... No. 14 lefthander in Georgia by Perfect Game ... lettered three times in baseball at Milton High School, where he was coached by Joey Ray.

Personal: His brother, Kyle, was a righthander at Clemson from 2013-15 ... majoring in construction science & management ... born Alexander Benjamin Schnell on May 4, 1995 in Atlanta, Ga.