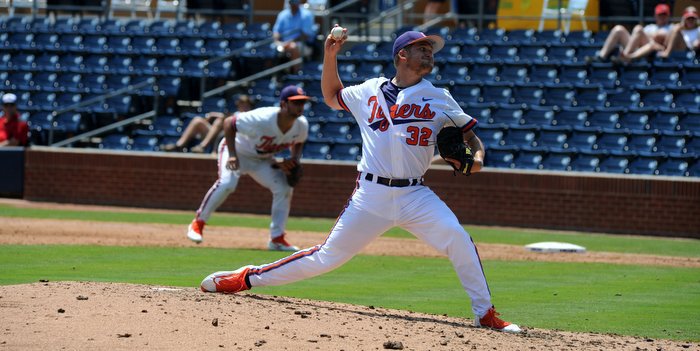 Schmidt earned his eighth win of the season

DURHAM, NC – The Tigers are Rohlin’ through the ACC Baseball Championship.

The Tigers improve to 40-18 with the win while Louisville falls to 47-11. Clemson now controls it’s own destiny in Pool B but could also advance to Sunday’s title game with a little help. If Virginia defeats Wake Forest, the Tigers will advance. If Wake wins, then Clemson would need to defeat Wake Forest at 11 a.m. Saturday.

Schmidt got the first two outs in the ninth, but back-to-back singles brought the winning run to the plate. Enter Pat Krall

Schmidt gave up three runs (two earned) and threw 126 pitches while walking just one and striking out six. He improves to 8-4 on the season.

Krall got Corey Ray to line out to short to end the game. The save was Krall's fifth of the season.

The win was the seventh straight for the Tigers.

"This is an unbelievable win for our program against what I think is arguably the best team in the country," head caoch Monte Lee said. "You have to give Louisville a lot of credit for what they accomplished this year. They are extremely talented, one through nine in their lineup. They have premium arms with starting pitching. McKay is one of the best starting pitchers in the country.

"And for us to find a way, down early, to find a way to win this game, I think it says an awful lot about our ballclub, about our toughness. We had some huge at-bats today. Seth Beer hit a homer late. Reed Rohlman had two just massive at-bats for us, hit two home runs today, which was the difference in the ballgame. K.J. Bryant, who plays some for us versus lefties had a great day. And Weston Wilson hit a big home run early." 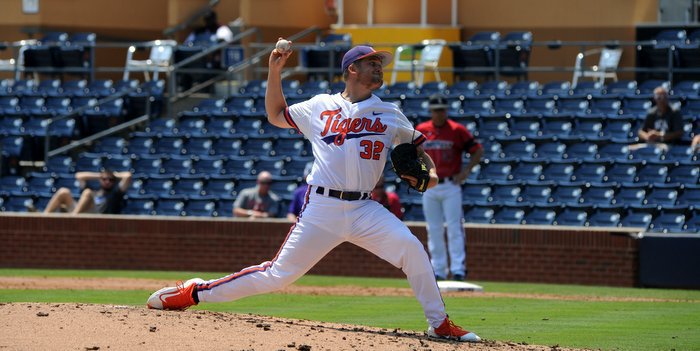 Schmidt earned his eighth win of the season "

Lee said the win came on the back of Schmidt's stellar effort.

"But Clate Schmidt, what can you say? It doesn't get more gutsy than that," Lee said. "The guy is just an absolute warrior, and the one thing that you know when Clate Schmidt pitches in big-time atmospheres and big-time games, he steps up, he elevates to the level of competition, and when we need him the most, he got it done for us today.

"I just can't tell you how proud I am for him. It will go down in my mind as one of the more gutsy performances I've seen out of a starting pitcher. He scored some runs early and he held them at bay and found a way to get deep into the ballgame. Got into the ninth inning, and against a really good offense."

Just can't say enough about him and his toughness and competitiveness. That's why we won today was because of Clate Schmidt's toughness and our ability to find a way to put together some big at-bats against a really good starting pitcher.

Schmidt ran into to trouble in the second inning as starting pitcher and cleanup hitter Brendan McKay singled to third on a bunt to lead off the inning. McKay advanced to second on a bunt and third on a grounder. Danny Rosenbaum laced a two-out single to left to put Louisville up 1-0.

However, the Tigers and Cards were quickly square again at 1-1 after Weston Wilson hit a rocket shot 422 feed off the building in left field to tie the game. The home run was his sixth of the season and just the fifth that McKay has given p this season.

Clemson has been error prone at times this season – especially on the road – and those errors came back to bite them in the third as Corey Ray hit a ground ball to third, but the throw was airmailed giving the Cards a leadoff runner. Ray stole second and advanced to third on a fly out by Colby Fitch and scored on a grounder to short, putting Lousiville back ahead with a 2-1 advantage.

The Cards added another run in the fourth as Devin Hairston led off the inning with a single to left field and advanced to third on a double down the left field line by Rosenbaum. A bloop single to center scored Hairston to extend Louisville’s lead to 3-1.

Reed Rohlman led off the fifth inning with a 339-foot home run to right field – his first homer of the season and just the sixth given up by McKay. K.J. Bryant followed that up with a single up the middle, and the Tigers loaded the bases after back-to-back walks, bringing Seth Beer to the plate with just one out. Beer was hit by the first pitch of the at-bat, scoring Bryant from third and tying the game at 3-3.

Rohlman hit his second home run of the game – and of the season – in the sixth inning to give Clemson a 4-3 lead and end Louisville starter Brendan McKay’s day. Rohlman is the first Tiger to hit two home runs in an ACC Tournament game since Jeff Baker in 2000.

McKay finished the day throwing 93 pitches (45 strikes) in 5 1/3 innings. The sophomore lefty gave up four runs on five walks, three wild pitches, and a hit batter while striking out four.

Seth Beer decided to get in on the home run act with a long ball to right field – his 16th of the season to set the freshman home run record – and extend Clemson’s lead to 5-3.

Meanwhile, Schmidt was rolling, and he worked around a one-out single in the eighth, getting a called strikeout of Ray to end the inning. As Schmidt walked off the mound, he pointed to his heart and pounded his chest in excitement.

The Tigers return to action at 11 a.m. Saturday against the Demon Deacons.

Clemson vs Louisville Boxscore
Get the latest Clemson gear right here!
Comment on this story