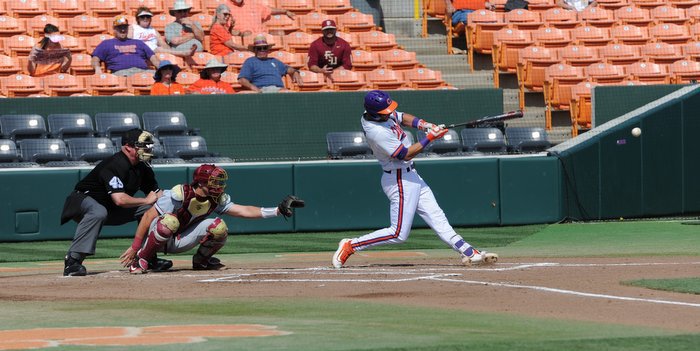 CLEMSON – Pat Krall and Seth Beer, have yourselves a day.

Krall came on in relief of starter Alex Schnell in the third and went the rest of the way in earning the win, pitching seven innings and giving up just three hits and no runs while walking one with eight strikeouts. He improves to 7-1 on the season after his 85-pitch effort.

Head coach Monte Lee said it was a win the Tigers had to have.

"Overall, it was just a great win and, as you all know, one that we desperately needed," Lee said. "After a tough game two, I thought we were really, really good in all areas today. Pat Krall obviously deserves a tremendous amount of credit. I don't know if we could've played better offensively. We had some two-out hits. We had some two-strike hits. I thought our guys grinded out some at-bats. We used the whole field on what was really a tough day to hit with the wind blowing straight in. You can see the production throughout our lineup.

"Pinder with two hits. Eli scores two runs. Chris Okey scores two runs. He walks three times and shows his patience at the plate, and the one hit he gets it's on an 0-2 count and it's a double down the right field line. It just shows you how locked in he was today. Seth Beer was big again for us. Weston Wilson right there, that insurance run - in baseball when you're up four as opposed to three, the tying run is no longer in the hole - so that was a big run for us right there to tack on that fourth run at 7-3. Every time we give K.J. Bryant an opportunity, we find a way to win it seems like. He deserves to play." 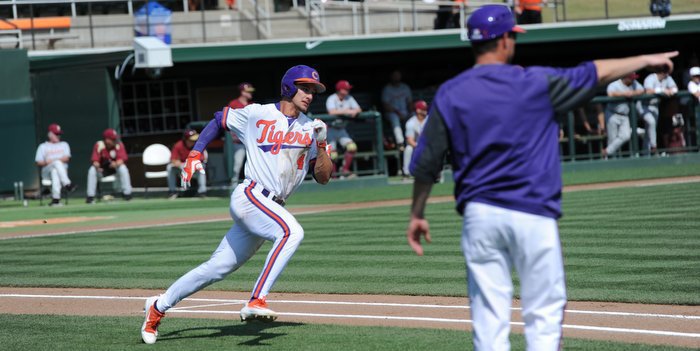 The Tigers took advantage of some early inconsistency from Florida St. starter Cole Sands. Eli White hit a one out double and Chris Okey and Seth Beer walked to load the bases. Reed Rohlman followed that up with a five-pitch walk to plate the first run of the game and give Clemson a 1-0 lead.

Florida State, however, answered in the second. Nieporte led off the inning with a single through the right side and advanced to third on a double down the right field line by DeLuzio. Wells singled to right field to clear the bases and give Florida State a 2-1 lead.

After a walk and single to begin the third inning, Clemson starter Alex Schnell’s day was complete. Pat Krall came in the game and threw a wild pitch that scored Walls, giving the ‘Noles a 3-1 advantage.

Play was halted with two outs in the fourth inning because of lightning in the area, however, the stoppage didn’t prevent Krall from continuing once play resumed.

Weston Wilson reached on a throwing error to lead off the bottom half of the fourth inning, advanced to second on a groundout by Andrew Cox and third on a single to shortstop. Chase Pinder promptly lined a double down the left field line to score Wilson and cut Florida State’s lead to 3-2.

The Tigers hot hitting continued in the fifth as Chris Okey led off the inning with a double down the right field line. Seth Beer –who was pitched around for most of the game – singled through the left side to score Okey. Beer took second on the throw, took third on a wild pitch and scored on a long fly ball by Rohlman to give Clemson a 4-3 lead after five innings.

Krall ran into trouble in the eighth – he walked the second batter of the inning and gave up a single to put runners at first and second with one out. However, he struck out Dylan Busby looking and got the final out on a fielder’s choice to end the threat.

Clemson got a little breathing room in the eighth. Pinder singled to lead off the inning, but White grounded out to force Pinder. Okey walked and the Tigers got a big hit off the bat of Beer who beat the shift with a double down the left field line to score White and Okey and give the Tigers a 6-3 lead. Weston Wilson added a run-scoring single two batters later for a 7-3 lead.

Krall came out to pitch the ninth to induce a long fly ball and strike out the final two batters and he later said there was no doubt he wanted the ball in the final frame.

"They didn't need to come ask me. I knew I was going back out there," Krall said. "There wasn't an issue with the number of pitches, and I was feeling good. I wanted to go back out there. My fastball wasn't great today but I had a good changeup and they were biting on the slider."

Lee said that he's happy to have Krall at his disposal.

Lee finished by saying he hopes this win propels the Tigers into the postseason.

"I think when you look back at the season, whenever it's over, this is a win that we will remember," Lee said. "We've gone through a tough stretch the last three weekends in a row. Everybody looked at the series and said this is one the Tigers must win, and we found a way to get it done. We did not play very well yesterday. It just goes to show you the character and the selflessness of our team to be ready to play today and put yesterday's game behind them."

Clemson returns to action on Wednesday to host Furman in a 6:30 p.m. game at Doug Kingsmore.