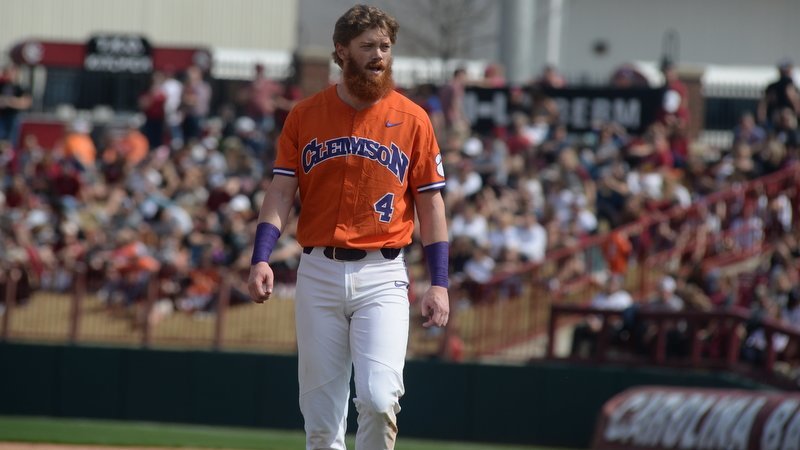 The Gamecocks won the series for the first time since 2015

COLUMBIA – Luke Berryhill and South Carolina’s offense proved too much for Clemson in Sunday’s rubber match of the rivalry series.

The Gamecocks defeated the Tigers 14-3 Sunday afternoon at Founder’s Park to take the series 2-1 for the first time since 2014. It’s the most runs scored against Clemson since March 3, 2001, when South Carolina beat the Tigers 21-8.

South Carolina improves to 9-2 while Clemson falls to 8-3 on the young season.

Clemson got on the board when Sam Hall scored on an RBI double by Kyle Wilkie. Hall led off the inning with a single, stole second and advanced to third on a Grayson Byrd groundout. The Tigers led 1-0 midway through the first inning.

Starter Justin Wrobleski pitched just one-third of an inning and gave up all five runs. He takes the loss.

"We have to do a better job of getting deeper in the game with our starting pitching," head coach Monte Lee said. "That was a big factor in the losses for us - we were unable to get a deep start in any of our starts. Today we had to go to the pen early today against an offense that was very hot and had a lot of momentum going their way and were swinging the bats very well. It was tough to stop them. We needed somebody to step up and we couldn't do that. We needed somebody to step up today and we didn't get that. They swung the bats very well and they pitched very well."

Clemson’s lead was short-lived, however, has the Gamecocks took the lead for good in the bottom half of the first. 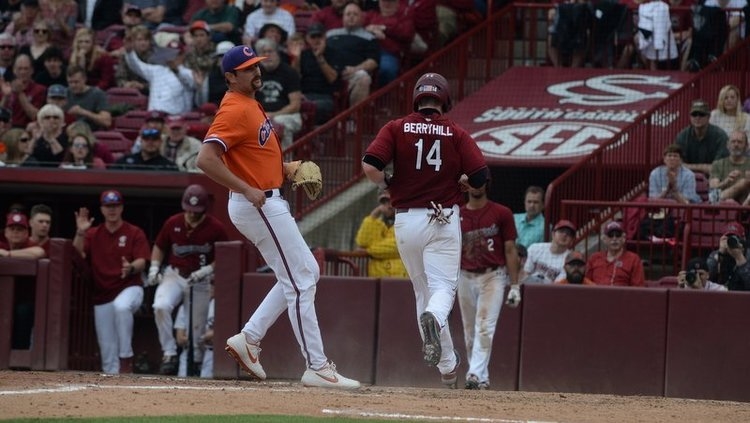 The Gamecocks won the series for the first time since 2015 "

The Gamecocks started the inning with back-to-back singles before T.J. Hopkins hit a rocket to centerfield for a two-run double. Andrew Eyester singled and Berryhill promptly hit a three-run home run down the left field line giving South Carolina an early 5-1 lead.

South Carolina added a run in the second when Jacob Olson hit an RBI single to center to plate Hopkins and give the Gamecocks a 6-1 lead after two innings.

The fourth inning saw another five spot for the Gamecocks. Noah Campbell and Brady Allen led off the inning with back-to-back singles setting up a Hopkins 3-run homer. Eyester was hit by a pitch and Berryhill hit his second long ball of the game for an 11-1 Gamecock lead.

Clemson’s offense showed signs of life in the sixth. Logan Davidson hit an 0-1 pitch over the left field wall – his fourth home run of the season. Davis Sharpe reached base on an error by the catcher out in front of home plate and Byrd beat the shift with a single through the left side to put runners at first and second. Michael Green singled to right field to plate Sharpe and make it 11-3.

The Gamecocks once again answered with three runs in the bottom half of the sixth and continued to add from there.

Hall said the Tigers have to be tougher.

“You got to be tough. It’s not an easy series and not an easy ball club to beat," Hall said. "So you have to be tough and keep playing the whole time. We want to win this thing, not me. This has nothing to do with me. It still sucks regardless."

Clemson travels to Greenville Tuesday for a matchup with Furman at Fluor Field at 6 p.m. and will host the North Carolina Tar Heels in a three-game series beginning Friday at 6 p.m.