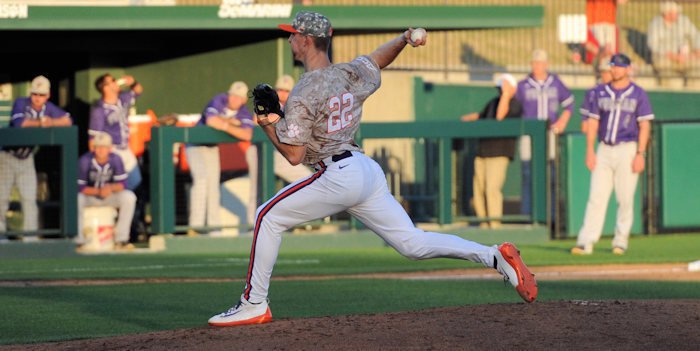 Jackson improved to 4-1 on the season

Weston Jackson cranked out two homers and drove in five runs and Tyler Jackson helped lead the pitch to its third consecutive shutout as No. 5 Clemson defeated Furman 8-0 at Doug Kingsmore Stadium.

Clemson head coach Monte Lee told the media after the game that the pitching depth is beginning to shine and the competitiveness among the pitching staff is the reason for the three shutouts.

"We've pitched very well all year. What you're seeing is a team that guys are getting more and more accustomed to their roles and the expectations on the pitching staff are so high right now and the competitive level between the pitchers," Lee said. "Every guy that comes in there knows what the standard is and he wants to come in there and try and stay in the ballgame because we have so many options out of the pen. Those guys don't want me coming out there so they're really competing regardless of the score because they know with the strength of our bullpen that if I get an opportunity to come in the game tonight I need to throw well. I just think the standard right now out of the bullpen and with our starters is so high and they're competing against each other doing an unbelievable job. Coach See, you have to give him all of the credit. He's done an unbelievable job developing our pitchers and raising that standard of excellence and you're really seeing it right now."

The Tigers got the scoring started with one hit in the bottom of the second. Andrew Cox walked to lead off the inning, moved to second on a stolen base and came around to score on Weston Jackson’s RBI double.

Logan Davidson singled to lead off the fourth and moved to second on a passed ball. Two outs later, Grayson Byrd singled up the middle, scoring Davidson for a 2-0 lead.

The Tigers added another run in the sixth. With two outs, Jackson launched a 2-0 pitch over the wall in left, and Clemson led 3-0. Reed Rohlman followed that with a walk on a 3-1 pitch, and he moved to second on Byrd’s single to left. Jordan Greene then rifled a single to left, and Rohlman scored ahead of the throw for a 4-0 lead.

Jackson continued to roll along and was replaced after giving up a two-out double in the seventh. He was replaced by Ryan Miller, who escaped the jam with a strikeout. Jackson ended up pitching 6 2/3 innings, giving up five hits, no runs, one walk and five strikeouts.

The Tigers piled on in the seventh, thanks to Jackson. Cox singled with two out and moved to second on an infield single by Davidson. That brought up Jackson, who blasted a 0-1 pitch deep over the Chapman Grandstands in left for a three-run homer, his fourth of the season.

Seth Beer finished the scoring with his eighth homer of the season, a drive over the wall in right on a 3-2 pitch leading off the bottom of the eighth.

Lee said this was one of the most complete games he's seen from his team so far this season.

"I continue to be very impressed with our team. Three consecutive shutouts now. Just an unbelievable job by our pitching staff and Coach See," he said. "Jackson has been very consistent. He was very good again for us tonight. The bullpen was really good. Ryan Miller and Mitchell Miller both threw the ball very well. We only had one walk on the night. Defensively, quite honestly, I thought we played really well. Grayson Byrd, I thought had his best game of the year. He had a couple of really good at-bats for us - two hits and drove in a run. Weston Jackson had his best game of the year. He swung the bat very well. He hit two home runs and drove in five. Six out of our eight runs came with two outs. Five down in the order counted for seven of the eight runs outside of Seth's home run. Getting production from the back half of the lineup is always good. I thought we played a very complete game. Very proud of our team and we just have to keep it going."

The Tigers return to action Wednesday, hosting Winthrop. First pitch is at 6:30 p.m., and it’s BOGO Wednesday. Fans can buy one regular-price ticket and get one of equal value for free. The game will be broadcast on ACC Network Extra (WatchESPN).

Clemson vs. Furman boxscore
ONE DAY ONLY! Fanatics.com Black Friday Sale 20% off on orders over $75
Comment on this story