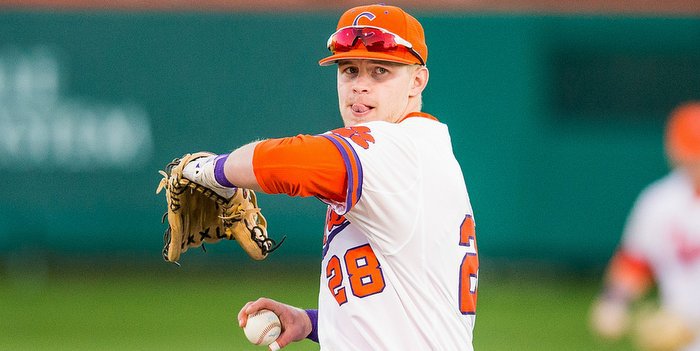 Chris Williams should be healthy next spring

CLEMSON – Standouts like Seth Beer, Chris Williams and Logan Davidson will form the nucleus of Clemson’s everday lineup next season, but head coach Monte Lee will depend on freshmen and unproven youngsters to fill out a good portion of the lineup.

Lee is 86-41 overall at Clemson, with an ACC Championship, two 40-win seasons and has hosted two NCAA Regionals in his two years with the Tigers. The 2017 season, however, will feature a young roster, and the everyday lineup will reflect that.

The first order of business will be getting catcher Chris Williams healthy – Williams missed much of the latter part of the season after injuring his shoulder against Nevada. Lee anticipates Williams being ready to go in the fall.

The good news for Lee is that freshman Kyle Wilkie fared well in Williams’ absence and can catch, and Williams is an option to replace Andrew Cox at first base.

“I would anticipate doing that (letting Williams play some at first). Yes. Kyle Wilkie played great at the end of the season and got some valuable experience behind the plate,” Lee said. “And Chris - people won't believe me - Chris is probably as good defensively at first as Cox was. He is an average defender at third base, and he has some versatility and athleticism people don't realize. He gives us some versatility and some options. We have two guys that can catch and we can give him some rest and let Kyle catch.” 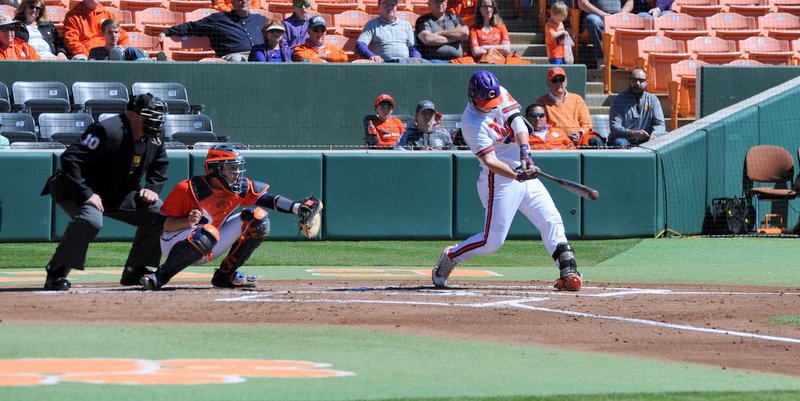 Chris Williams should be healthy next spring "

Lee’s offense is known for the three-run homer, but he says he wants to build a team that can create runs against all types of pitching.

“We have to become more dynamic and more athletic within our skillset with the position players,” Lee said. “A lot of times, when you watch us play, I love to walk and I love to hit home runs. I love for our players to create runs via the free pass and the home run, because you cannot defend either. But we have to have the types of players that when you face good teams that have pitching that pounds the strike zone and plays good defense, that we can try to create runs. Our big focus this fall is trying to become a team that can create runs. Even with our guys that can't run, can they create runs, bunt more, steal bases, safety squeeze more.”

A big help in that regard could be freshman Kier Meredith. Meredith was drafted by the Cubs but expects to begin school later this week at Clemson. Recently listed by Baseball America as the nation’s best defensive outfielder among draft-eligible high school prospects, Meredith has been clocked running from home plate to first base in 3.96 seconds by Major League scouts this season.

For comparison, the average home-to-first time by left-handed MLB hitters in 2016 was 4.58 seconds, according to MLB’s Statcast technology. Meredith’s speed, which some scouts have rated an 80 on the commonly used 20-80 grading scale, allows him to cover an inordinate amount of ground in the outfield.

“We would anticipate Kier pushing for that starting centerfield spot as a true freshman,” Lee said. “He has game-changing speed. He's one of the top five fastest players in the 2017 class. Water covers 2/3 of the Earth and Kier covers the rest. He can fly. He's left-handed, which we love. He brings a skill set that we don't have. He plays to his tools. He is going to bunt and hit the ball all over the park. He's the kind of player we need to bring into the program.”

Lee then went over several of the freshmen who could make an impact.

“Within the position players, you have Matt Cooper, a really good player. He can run, a big guy,” Lee said. “Has power. Has a chance to be a really good player and can play multiple positions. He can catch, play corner outfield and play corner outfield and hit with some power. We have a guy out of Blue Ridge who is extremely underrated as a player - Elijah Henderson. A friend of mine who scouts says he has a little bit of Taylor Harbin in him - a little guy with a big swing. He has some power, he can run, steal bases and probably profiles as a second baseman. We are gonna move him around, too. Not a big kid but swings the bat bigger than he is.

"Sam Weatherly is a very talented player. He is a left-handed pitcher with a great breaking ball. He can run. Left-handed hitter. He will play the outfield and play first base as well. We are going to pitch him and play him in the field in the fall and try and develop him as a two-way player. We have an outfielder coming in – Bryce Teodosio out of Greenville. He can play first and centerfield and play all three outfield positions. He reminds me a little bit of Drew Wharton. We aren’t bringing in a lot of JC guys. It's more high school driven. We feel like we want to bring in more high school players and get them into the program and develop them.”