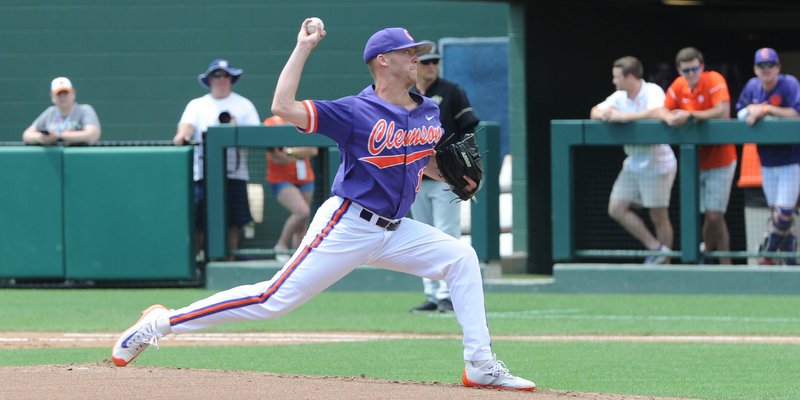 Eubanks pitched his second complete game shutout of the season and No. 4 Clemson routed Wake Forest 11-0 at Doug Kingsmore Stadium Saturday afternoon, winning the series over the 17th-ranked Demon Deacons.

Alex Eubanks was outstanding Saturday. On a day when Clemson’s tired bullpen needed a break, he pitched a complete game shutout. It was Clemson’s second complete game – the other by Eubanks – of the season. He improves to 6-3 on the season with the win. He gave up seven hits, struck out 12 and walked none. He threw 116 pitches, 80 for strikes. His 12 strikeouts were a career-high. His other complete game this season was also a shutout - at Boston College in late March.

Chase Pinder, Reed Rohlman, and Grayson Byrd led the Tigers' hitting attack. Pinder was 2-for-4 with a homer, two RBI and four runs scored. Rohlman was 3-for-5 with a double, two RBI and a run scored. Byrd had two hits, scored three runs and drove in another.

Jordan Greene worked a one-out walk and advanced to second on a single to left by Byrd. Pinder hit a grounder to third, but the third baseman and Greene were crossed up and the ball skirted into left field, allowing Greene to score. Rohlman singled to first, scoring Byrd, and a wild pitch scored Pinder, giving the Tigers a 3-0 lead in the third.

Clemson turned in another big inning in the fifth. Chase Pinder took a ball off his neck with one out, stole second and scored on a double down the right field line by Rohlman. Davidson followed with a double of his own, plating Rohlman and scored on a bloop single to right by Seth Beer for a 6-0 lead.

Clemson added two runs in the sixth. Byrd led off the inning with a walk, advanced to second on a single to third by Pinder and scored on a fly out by Davidson. Wake Forest’s third wild pitch of the game allowed Pinder to score and gave Clemson an 8-0 lead heading into the seventh.

Andrew Cox was hit by a pitch to lead off the seventh inning and came around to score on a two-out single by Byrd. Pinder drilled a 1-2 pitch into the Chapman Grandstands for his first home run of the season, extending Clemson’s lead to 11-0.

Clemson will host the College of Charleston Tuesday at 6:30 p.m., then travel to Chapel Hill for a top-five matchup against the Tar Heels.