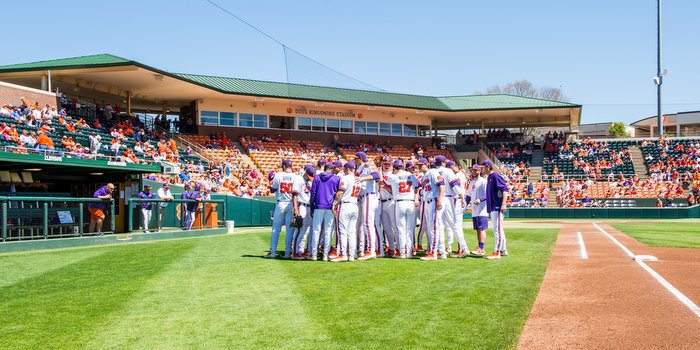 With its three-game sweep at Notre Dame, Clemson (38-18) earned the No. 6 seed in the ACC Tournament at Durham (N.C.) Bulls Athletic Park. The Tigers face No. 3 seed Virginia on Thursday at 11 a.m., No. 2 seed Louisville on Friday at 11 a.m., and the winner of the Duke vs. Wake Forest first-round game on Saturday at 11 a.m. All three games will be televised live by Regional Sports Network and available on ESPN3 (subject to blackout). The Tigers do not play on Wednesday.

The winner of Clemson's bracket plays in the ACC Championship game on Sunday at noon on ESPN2. The other bracket consists of No. 1 seed Miami (Fla.), No. 4 seed Florida State, No. 5 seed NC State and the winner of the Boston College vs. Georgia Tech first-round game.

The Tigers swept Notre Dame this past weekend, the sweep allowing Clemson to claim the all-important sixth seed. Seeds seven through ten will play in play-in games on Tuesday while the first six seeds have a bye on the first day of the tournament. Overall, Clemson has won 12 of its last 16 games and five in a row.

The tournament will get underway Tuesday with two first round games. The Duke Blue Devils and Wake Forest Demon Deacons will play at 11 a.m., followed by the Boston College Eagles and Georgia Tech Yellow Jackets at 3 p.m. 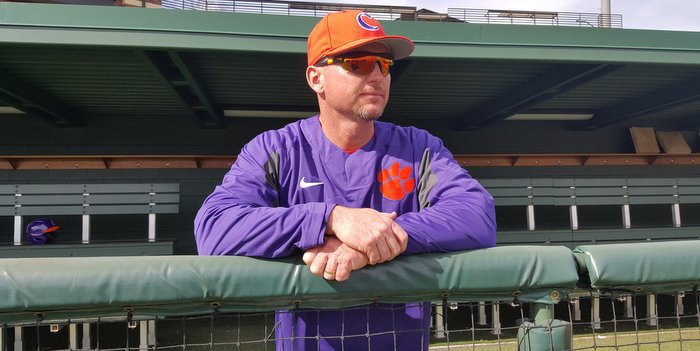 Clemson head coach Monte Lee talked about the sweep and Clemson’s postseason chances after the 6-2 win over the Fighting Irish Sunday.

“We fought and found a way to sweep this series and put ourselves in good position going into the ACC Tournament and get ourselves in that conversation for playing at home,” Lee said. “We still have to take care of business. We have to go into the ACC Tournament and play well and that’s all we can worry about right now. But I am very proud we are not in a play-in game situation and we can give our guys that extra day of rest and see what happens.”

The Tigers are ranked 10th nationally in RPI and 8th in strength of schedule, and the Tigers’ 38 wins are third in the ACC behind Louisville (46) and Miami (41).

Under the pool-play format, each team will play one game against each of the other three opponents in its pool Wednesday through Saturday (May 25-28). The two teams with the best records within their respective pools will advance to the title game on Sunday, May 29, with the winner earning the ACC’s automatic berth into the NCAA Tournament.

The tournament will get underway Tuesday with two first round games. The Blue Devils and Demon Deacons will play at 11 a.m., followed by the Eagles and Yellow Jackets at 3 p.m.

Florida State and NC State will open play on Wednesday at 11 a.m., followed by Miami and the Boston College-Georgia Tech winner at 3 p.m., and Louisville and the Duke-Wake Forest winner at 7 p.m.

Virginia meets Clemson at 11 a.m. on Thursday, while Florida State will face either Boston College or Georgia Tech at 3 p.m., and Miami will take on NC State at 7 p.m.

Friday’s action gets started at 11 a.m. when Louisville plays Clemson. Virginia will take on the Duke-Wake Forest winner at 3 p.m., followed by NC State and the Boston College-Georgia Tech winner at 7 p.m.

The final day of pool play is led off by Clemson and the Duke-Wake Forest winner at 11 a.m., followed by Miami and Florida State at 3 p.m., and Louisville versus Virginia at 7 p.m.

The two pool winners will play Sunday at noon for the 2016 ACC Championship.