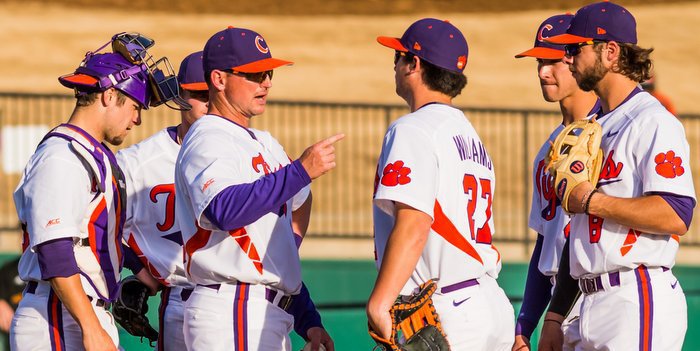 Lee thinks his Tigers are pointed in the right direction

In the series finale against Wake Forest, the Tigers trailed the Demon Deacons 8-4 before an eight-run seventh inning and a grand slam by Chris Okey led to a 13-8 victory and series win.

Head coach Monte Lee says it shows his team continues to compete, even when their backs are against the proverbial wall.

“I think the big thing is the experience from the South Carolina weekend and the mid-week game with Winthrop - losing the Friday game at South Carolina, but bouncing back and winning the next to win the series really showed the team that we can win a series after dropping the first game,” Lee told TigerNet Monday. “It's not ideal or the way you would draw it up, but our guys understand that they can still pull through and compete and find ways to win that second game and ultimately win the third game. We've done it three times now, so we have that experience, and we've come from behind to win - with the mid-week game against Winthrop, and I think that helped us tremendously. I think our guys understand that you just have to keep playing and keep competing. You can't let the score dictate how you compete. I think it's really that simple.”

Freshman sensation Seth Beer was named one of the national players of the week Monday, and deservedly so: Beer had four homers, one double, 10 RBIs and a 1.250 slugging percentage to go along with five runs, two walks and one hit-by-pitch against no strikeouts and a .500 on-base percentage in the four games against Winthrop and Wake.

Lee thinks his Tigers are pointed in the right direction"

However, Lee knows others have to step up if the Tigers want to continue their winning ways, and that’s why he was happy to see Okey deliver one of Sunday’s crucial hits.

“No question about it. With Seth - we all understand how he's swinging the bat - a good team is balanced and that's the thing that other guys can step up in a different situations and we have a lot of confidence in Chris,” Lee said. “That's why we bumped him up to the three-hole in front of Seth and we needed somebody to step up. On Sunday and Saturday, we were leaving too many guys on base.

“We've done a good job of getting on base and putting ourselves in a position to score runs, but we really haven't stepped up and gotten big hits with runners in scoring position with one or two outs. We had bases loaded and one out and Rohlman - a good hitter - popped up to left, and it wasn't deep enough to score the run. As a coach, you're telling them, "Okay, somebody's got to step up." That was huge. It won the series for us. It was a difference maker - Okey's big home run.”

The Tigers also got a boost from the bullpen.

“Brooks Crawford was really, really good out of the bullpen for us to hold them at bay because they were swinging the bats very well,” Lee said. “I think that's been the big thing - somebody has to step up with runners in scoring position and deliver a blow - but we keep finding ways to win. It wasn't pretty, and we wouldn't draw it up that way, where you don't get a quality start in game two or game three, but we found ways to win those games. You rather still be trying to work on things and get better while you're winning, we're not going to complain about it for sure. We still have a long ways to go. This team isn't where we want it to be. We've got to get better in a lot of different areas, and our guys understand that. The constant is we have to compete, regardless of the score. I worry just as much about it when we are up by runs. We have to keep playing when we are up by four or five because you got a couple of guys on and somebody runs into one you're only up by one.”

Lee would also like to see his starters put together consistent efforts – the starters gave up 16 runs on 15 hits in 11.1 innings at Wake this past weekend.

“To be honest, you're always concerned about it as a coach if you're not getting quality starts. But, on the other side, we've gotten great starts with those guys too,” Lee said. “It's not like Clate (Schmidt) and Alex Eubanks haven't shown us they couldn't do it - they have. We still have a lot of confidence in those guys. That hasn't changed. It is always a concern when you have to go to your bullpen early, and you have to stretch some guys out. We had to stretch some out, and it will be very difficult for us to pitch them in these two mid-week games because we had to stretch them out over the weekend. We have to win our ACC series, so we did what we had to do, and it worked out. The biggest thing is when you don't get quality starts you have to push your bullpen a little bit too much.”

The Tigers will play two games against The Citadel – on Tuesday and Wednesday – at Joseph P. Riley Park in Charleston. The Bulldogs are 7-8 on the season and don’t represent a conference foe, but Lee says the games are critical at this point in the season.

“The importance is we're winning baseball games, and we have to continue to win baseball games, so we have to be consistent. Consistent teams have to show up and be ready to play every single day,” he said. “Playing on the road is tough, and it's always tough playing The Citadel - they are a very competitive team. And, you're playing in a ball park that is not a hitter’s park - it's a pitcher's ball park. We can't go down there and hit a bunch of balls in the air because those are easy outs. We are going to have to adjust our swing and pitch guys that haven't pitched a lot. That is another challenge for us, but I'm looking forward to it because we're going to get to see three or four guys throw over the next couple of games that haven't gotten a lot of opportunities yet. We have our hands full. We've got a team coming in this weekend that is off to an unbelievable start in Boston College. NC State only scored four runs on the weekend. I like the idea that our team is being challenged, and some guys are going to have to step up, and we just have to be consistent.”