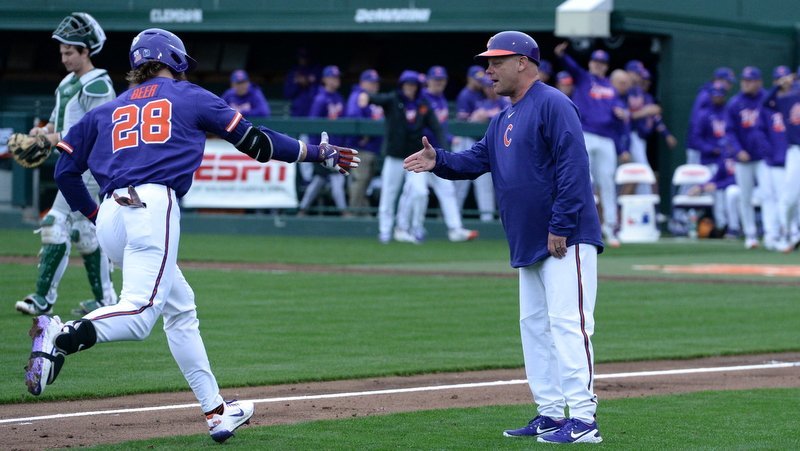 Spencer Strider picked up the first win of his Clemson career

The win improves Clemson to 2-0 on the young season and the Tigers will go for the sweep over the Tribe Sunday afternoon.

"Glad to win the series today. It was a tough ballgame," head coach Monte Lee said. "It was definitely a stressful ballgame just because of William & Mary. You've got to give them credit on the offensive end. They take advantage of mistakes. You look at their hits and the way they scored runs. They scored run on a lot of base hits and two-strike counts. They took advantage of the free pass. We only walked one batter but we hit three and in the one inning there where we hit a couple of guys and then the walk, they took advantage of that situation and put together a big inning to get them back in the game after we were up 7-3."

Clemson mustered just six hits against the Tribe but took advantage of nine walks. Spencer Strider pitched three innings and picked up the first win of his Clemson career while Carson Speirs pitched the final 1 2/3 innings to pick up his first save. Beer and Cromwell each had two hits.

Clemson pitching has struck out 29 with just one walk in the series' first two games. 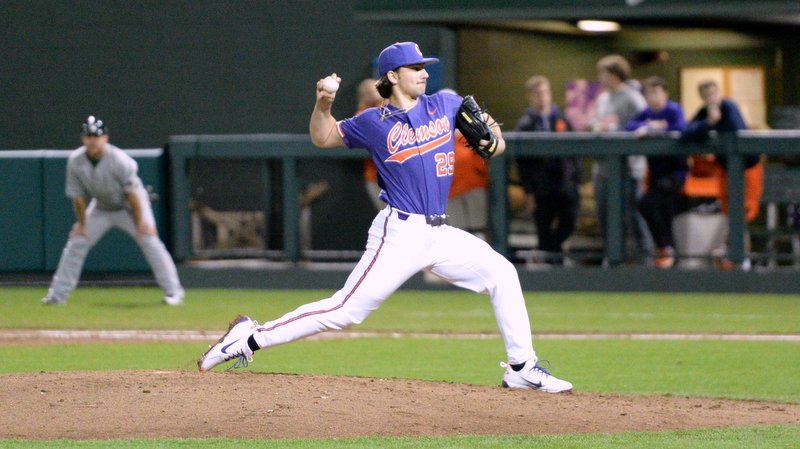 Spencer Strider picked up the first win of his Clemson career "

"Offensively, we took advantage of the free pass ourselves. I think we had nine walks, a hit-by-pitch," Lee said. "We swung the bats fairly well. I think we need to be a little more aggressive with runners in scoring position. It feels like we're trying to hunt the perfect pitch and we've just got to use all three strikes and swing the bat and be aggressive. Seth had a nice day. The best offensive player of the day for us was Patrick Cromwell. Did a great job.

"Defensively, we played a good ballgame. Only one walk, a couple of hit batters and 14 strikeouts, so our pitching staff has done a nice job in that regard. Just need to be a little more aggressive with runners in scoring position and take advantage of the free passes that we're getting on offense and we wouldn't have been in the position that we were in at the end of the game."

William & Mary designated hitter Hunter Smith launched the first pitch of the second inning over the centerfield wall to give the Tribe an early 1-0 lead.

It didn’t take long for William & Mary to add to its lead. Leadoff hitter Ryan Hall hit a two-out double to right center and came around to score on a perfectly executed hit and run with Patrick Ryan singling through the right side for a 2-0 Tribe lead in the third inning.

Bryce Teodosio worked a leadoff walk in the third, stole second and advanced to third a dribbler up the first base line by Logan Davidson. Drew Wharton hit a grounder to third to score Clemson’s first run of the game. Seth Beer followed with a two-out rocket over the left field wall to tie the game at 2-2 after three innings.

Kyle Wilkie reached on a fielding error by the third baseman on a hit grounder with two outs in the fourth and came around to score on a rocket to left center by Patrick Cromwell to give Clemson a 3-2 lead after four innings.

A one-out single by Zach Pearson followed by a Hall double tied the game at 3-3 in the fifth inning.

The Tigers took the lead back in the bottom of the sixth. Williams started the inning with a high chopper to third and he beat the throw to first. Robert Jolly sacrificed Williams to second and Grayson Byrd was hit on his right elbow by a pitch to put runners at first and second. Wilkie drew a full-count walk to load the bases and Cromwell lofted a soft single to center that scored Williams for a 4-3 lead.

Teodosio struck out for the second out, but Davidson drew a walk on a 3-1 count that scored Byrd for the 5-3 Clemson lead.

Clemson added insurance runs in the seventh. Beer led off the inning with a ringing double to right and Williams walked to put runners at first and second. Jolly sacrificed both runners over a base. Byrd struck out swinging for the second out, but back-to-back walks by Wilkie and Cromwell plated Clemson’s sixth run. A wild pitch scored Williams for a 7-3 lead, moving Cromwell and Wilkie to second and third.

In his first appearance, Strider threw three innings, surrendering just four runs – all earned – on two hits and striking out seven. However, he was pulled in the eighth inning after giving up hitting two batters and walking one.

"It was good to get Spencer Strider out there. He had a good outing, I felt like even though he gave up some runs," Lee said. "He was cruising there. He struck out seven out of nine the third time through the order, so he did a nice job. Carson Spiers threw the ball well yesterday and we brought him in and he did an outstanding job there in the eighth and in the ninth to get the save."

A walk and a pair of hit batters loaded the bases for William and Mary with nobody out in the eight. A wild pitch that skirted all the way to the way to the backstop plated a run and put runners in scoring position. A hard-hit single just under the glove of Davidson, cut Clemson’s lead to 7-6.

The finale of the three-game series is set for Sunday at 3 p.m. Jake Higginbotham gets the start for the Tigers.