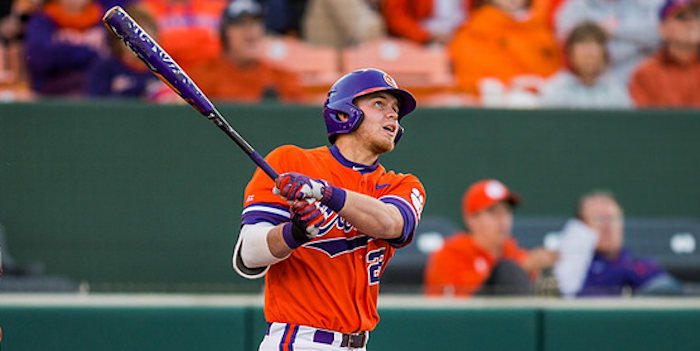 Beer hit his tenth homer of the season Saturday

Seth Beer’s two-out, bases loaded single in the top of the ninth broke a 10-all tie and helped No. 4 Clemson overcome a blown nine-run lead in defeating No. 25 Florida State 12-10 at Dick Howser Stadium Saturday night.

Clemson (30-5 overall, 14-2 ACC) opened up an early 10-1 lead only to see Florida State score nine runs in the middle innings to tie the game at 10-10 in the seventh. Three consecutive singles to open the ninth loaded the bases, but Logan Davidson and Chris Williams each struck out bringing up Beer, who dumped a single into centerfield that scored Grayson Byrd and Chase Pinder.

Reed Rohlman was 3-for-6 with a run scored and one driven in, while Beer was 3-for-5 with a homer, three scored and four runs driven inn. The homer came in the fourth and was his tenth of the season.

Beer said he wanted to stay in the moment and not get too rattled in his final at-bat.

“You just want to stay true. You know the situation. In between pitches, I just tried to take a few deep breaths and slow the game down and relax,” Beer said following the game. “In a situation like that with the crowd that they have, it can kind of get to you sometimes. I just tried to stay true and hit it up the middle. It went off the end of the bat a little bit, but I’m so excited.”

Clemson scored a single run in the first for a 1-0 lead, but scored seven runs with two out in the second inning to take an 8-0 lead. The Tigers hit six consecutive RBI doubles in the inning, which started with a Byrd walk.

The Tigers added single runs in the third and the fourth to take a 10-1 lead, but the Seminoles got three runs in the fourth, two in the fifth, one in the sixth and three in the seventh to tie the game.

Starter Charlie Barnes earned a no decision in his roughest outing of the season. Barnes went just five innings giving up seven hits, six runs (all earned) while walking two and striking out four.

Closer Ryley Gilliam came on with two outs in the seventh and the bases loaded as head coach Monte Lee tried to stop the Seminole momentum. He earned the win, his second of the season. He pitched 2 1/3 innings giving up two hits and striking out five.

Clemson came back from a four-run deficit Tuesday night against Charleston Southern, and Beer said it was his turn to step up and make a play for his teammates.

“I just try to enjoy it. If you think about things too much this game can get really hard really fast,” he said. “I just try to enjoy it and play it like I did as a kid. I just love every single one of them. Someone always steps up big in these types of games. It’s a great team to be a part of and I’m just so happy for the win.”

The second game of the series is scheduled for 2 p.m. Sunday and the finale will be on ESPNU at 7 p.m. Monday night.

Clemson vs. FSU game 1 boxscore
ONE DAY ONLY! Fanatics.com Black Friday Sale 20% off on orders over $75
Comment on this story