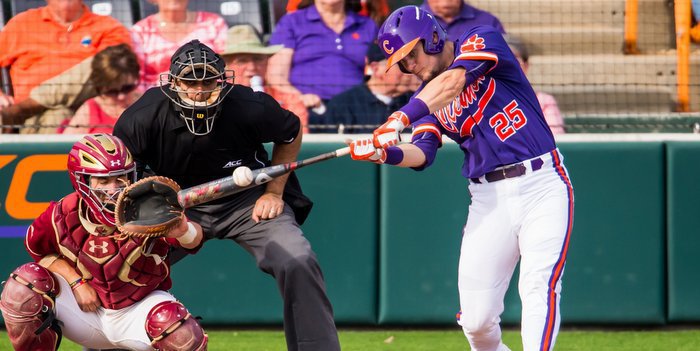 Clemson took game two and the series with a 6-1 victory over Boston College at Doug Kingsmore Stadium. The Tigers improved to 15-3 overall and 4-1 in the ACC, while Eagles dropped to 12-5 and 2-3 in conference.

Barnes – the sophomore lefty – moved to the Saturday role and had arguably his best outing of the season. He pitched a career-high 7.1 innings (117 pitches) and allowed just one run on four hits while striking out four to get his third win of the young season. It was the first Saturday start of the season for Barnes, who had been starting on Friday nights.

"Charlie Barnes was really, really good for us today," Lee said. "I thought he pitched to contact extremely well today. He was very aggressive and gave us a great start to win the series. It was all about Charlie today, along with Brooks Crawford who got his first save. I thought he came in and did what he's been doing all year long which is throwing strikes and getting people out in the bullpen. It was about pitching and defense." 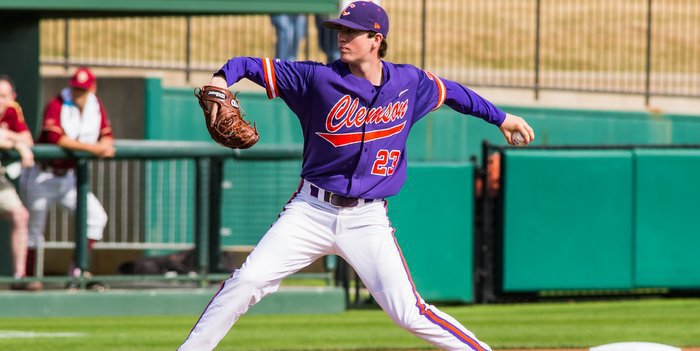 The Eagles threatened early - Donovan Casey shot a double down the left field line that rolled all the way to the wall to begin the second inning and advanced to third on a sacrifice bunt by Nick Sciortino. Stephen Sauter grounded out to short on a 3-2 pitch to score Casey and give Boston College an early 1-0 lead.

Seth Beer belted a double off the 310 mark on the left field wall to lead off the second inning for Clemson. Weston Wilson and Eli White took back-to-back walks to load the bases with nobody out. Andrew Cox and freshman Jordan Greene both popped up on the infield, but Adam Renwick worked a walk to plate Clemson’s first run of the game.

Pinder singled to the shortstop scoring both Wilson and White. Rohlman hit a fly ball to center that Strem appeared to handle, but he dropped the ball allowing Renwick to score, giving Clemson a 4-1 advantage.

Clemson added a run in the fifth after Renwick led off the inning with a walk, advanced to third on a fielder’s choice by Pinder and a throwing error by third baseman Gabriel Hernandez, and scored on a grounder by Rohlman. The Tigers led the Eagles 5-1 after four innings.

Lee said the early runs were just enough to give the Tigers the victory and the series win.

"We found a way to score early in the second inning. We took advantage of some walks and some free passes," Lee said. "Adam Renwick had a big bases-loaded walk and then Pinder hit one where the shortstop couldn't handle it. It was a tough ball that hopped up on him. We were very fortunate to put together a big inning right there. Our guys were patient. We got the leadoff guy on seven times today and we took advantage of some walks. We didn't swing the bat very good with guys in scoring position, but overall it was about Charlie and Brooks. They did a really good job. I think we only walked one guy the whole day. I don't think they got the leadoff guy one but once in nine innings, so we really threw the ball well. We played good defensively and did just enough offensively early in the ballgame along with some insurance runs by Robert Jolly with the big double that drove in the run late. It was enough to get the win today."

Barnes finally ran into trouble in the eighth, but Brooks Crawford came in and worked out of a bases-loaded jam.

The Tigers added to the lead in the bottom of the frame. Cox was hit in the foot to lead off the inning, and he moved to second on a passed ball. However, Cox was obviously limping and was replaced by pinch-runner Maleeke Gibson, who moved to third on a wild pitch. Robert Jolly promptly laced a double down the left field line to score Gibson for the 6-1 lead. Pinder’s ground ball to short moved Jolly to third with two out and Rohlman was hit on the hand by a pitch to put runners on the corners. Okey lined out to right to end the inning.

Crawford pitched the ninth to close out the win.

Game three of the series will be Sunday afternoon at Doug Kingsmore at 1 p.m.

Clemson vs. BC game two box
Get the latest Clemson gear right here!
Comment on this story