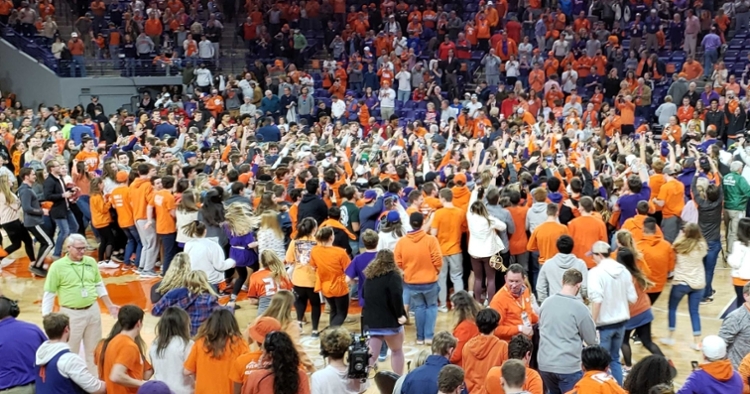 Clemson pulls off its second top-5 upset of the season.

John Newman scored a career-high 23 points and Clemson raced out to a big halftime lead as the Tigers knocked off No. 5 Louisville 77-62 at Littlejohn Coliseum Saturday afternoon, the second top-five team Clemson has beaten this season.

The Tigers have wins over two top-five wins in the same season for the first time since 1979-80 and just the fourth time overall. During that 1979-80 season, the Tigers beat three top five teams in the UPI Coaches Poll. The Tigers defeated No. 4 North Carolina and No. 1 Duke on consecutive Wednesday nights in January of 1980. Then in February of that season, the Tigers downed fifth-ranked Maryland.

Clemson defeated third-ranked Duke on January 14 at Littlejohn Coliseum by a 79-72 score.

Clemson recorded at least two top-five wins three times between 1975 and 1980. The Tigers defeated No. 3 Maryland and No. 4 NC State in 1974-75 in Tates Locke’s last year. Then, in 1975-76 the Tigers defeated No. 5 Wake Forest and No. 2 Maryland in consecutive ACC road games. The win at No. 2 Maryland is the highest-ranked team Clemson has beaten on the road in history. Those were the first two ACC road games of Bill Foster’s Clemson coaching career.

“Couldn’t be more proud of our guys… Just a fantastic team win against a very good, very well-coached team that we have a lot of respect for,” Clemson coach Brad Brownell said. “I’m just really happy for our players. Those are two big-time wins against outstanding teams with great coaches. Our guys played at an elite level tonight. The challenge is to try to sustain that, whether it’s in Littlejohn or outside.”

“It was just crazy, for real,” Newman said. “We just played a great game, honestly. I think we played a full 40. We always say full 40, play the whole game, and I think that’s what we did today.”

“I want to give credit to Clemson. I thought their team just played their tails off. I thought they were just absolutely ready to go from the very beginning,” Mack said. “I’m not going to be able to answer a lot of your questions about our team. We’re not playing very well.... This week wasn’t a good week for our team.”

The first half was all Clemson. A Newman layup gave Clemson a 6-5 lead and was the start of a 14-0 run for the Tigers. Newman and Mack hit back-to-back 3-pointers to make it 12-5, forcing a Louisville timeout. The timeout didn’t help as the Tigers scored six more out of the timeout and led 18-5 at the 13:06 mark.

The Tigers started fast in the second half and moved the lead to 21 at 42-21 after a short jumper in the lane by Mack. The Tigers went cold at that point, however, and Louisville went on a 10-0 run over the next three minutes that made it 42-31 with just over 11 minutes to play.

Newman ended that run by grabbing a Simms miss under the basket and putting it back to make it 44-31 with over ten minutes to go. The Cardinals cut it to ten at 44-34, but Mack hit a jumper and Simms nailed a trey from the side that put Clemson ahead 49-34. A few seconds later Newman hit a trey and the lead was back to 18 at 52-34.

Trailing 55-36 Louisville went on a 6-0 run that made it 55-42 with just over five minutes to play, but Simms found Alex Hemenway in the corner for a three and 40 seconds later Newman finished a 3-point play the old fashioned way as Clemson led 61-42 at the 4:05 mark.

The Tigers were able to hit enough of their free throws down the stretch and hold on for the win.

Clemson is off for a week and then returns to the court next Saturday in a 6 p.m. tip at Boston College. The team stays on the road for a 9 p.m. tip at Georgia Tech on Tuesday, Feb. 25th, and won’t play at home until Saturday, Feb. 29th when they host Florida State.