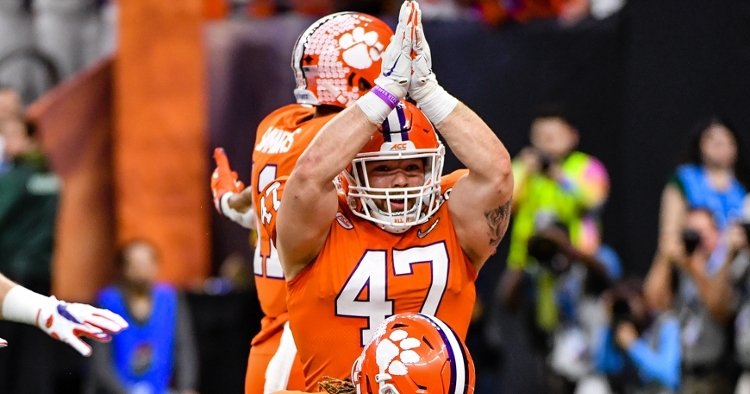 James Skalski has a chance to end his career with an amazing record.

Raise your hand when you realize you have heard this before – Clemson’s senior class has a chance to be the winningest senior class in college football history.

It seems like we post that every season during the Tigers’ current spectacular run of success. I was perusing the spring guide put out by Clemson’s superlative sports information department, and some of the numbers once again jumped out at me.

Before we get to the seniors, let’s recap some of the incredible numbers.

*Clemson’s recent success has been particularly pronounced in the midst of Clemson’s five-year streak of College Football Playoff appearances since 2015. Clemson (69-5) leads Alabama (66-6) for the most wins in the country in that span, while the teams have split two national championships in that time frame.

*Clemson has won 12 games in five consecutive seasons, the longest active streak of 12-win seasons and one of only four such streaks in major college football history, joining Alabama (five from 2014-18), Penn (seven from 1892-98) and Yale (five from 1888-92).

Even at lower thresholds, Clemson’s streak of success would remain impressive. Of the 130 active FBS schools, only 30 programs won at least six games in all five seasons from 2015-19. That number dips to 12 when pushing the win total to eight, and drops all the way to four (Clemson, Alabama, Oklahoma and Ohio State) when setting the bar at 10 wins.

The record for consecutive 10-win seasons is 14, set by Florida State (1987-2000). Alabama is the only other program with an active streak of at least nine straight 10-win seasons.

The Tigers have 16 10-win seasons in school history, with more than half coming in the last nine years under head coach Dabo Swinney. The 2019 season was Clemson’s sixth with at least 12 wins, with Swinney sitting at the helm for five of them.

Every January, Head Coach Dabo Swinney conducts his first official team meeting with his new team. The first order of business in the meeting is to “reset the room,” reorganizing the seating arrangement with seniors in front and all succeeding classes in order behind them in the team auditorium.

The 2020 Clemson seniors reached the front of the room having watched each of the two classes in front of them depart as the winningest senior classes in FBS history, tied with the 2018 Alabama seniors at 55 wins in four years. This year’s group will have the ability to follow in that lineage and earn that same claim.

The 2019 seniors were the second Clemson class and one of only three classes all-time to reach 55 career wins in a four-year span. Clemson’s 2019 group reached 55 wins in 58 games, tying the 2018 Alabama seniors as the quickest to that mark.

Clemson’s seniors can tie the 2018 and 2019 seniors for the best four-year mark in school, conference and Football Bowl Subdivision history with 14 wins in 2020 and can own the record outright if it were to repeat with another 15-0 campaign. 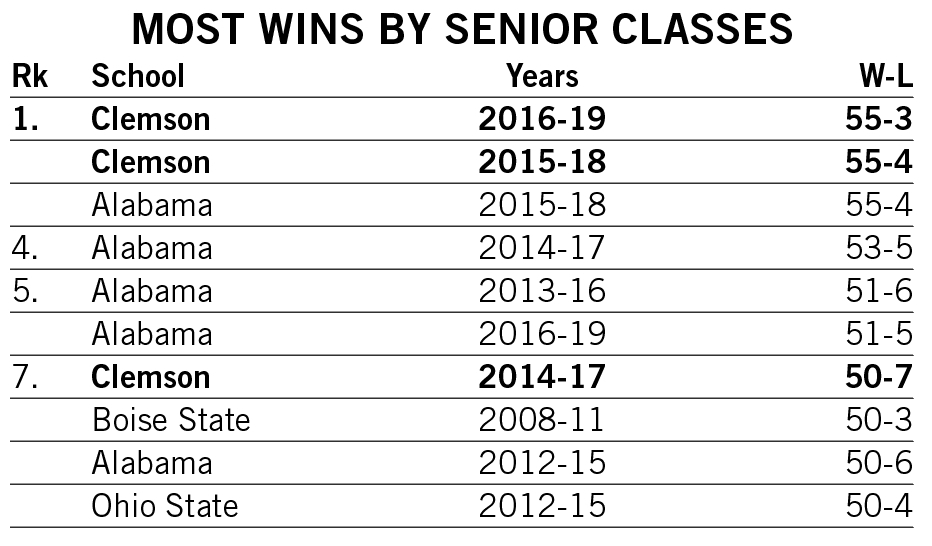 Most wins for a senior class
Comment on this story