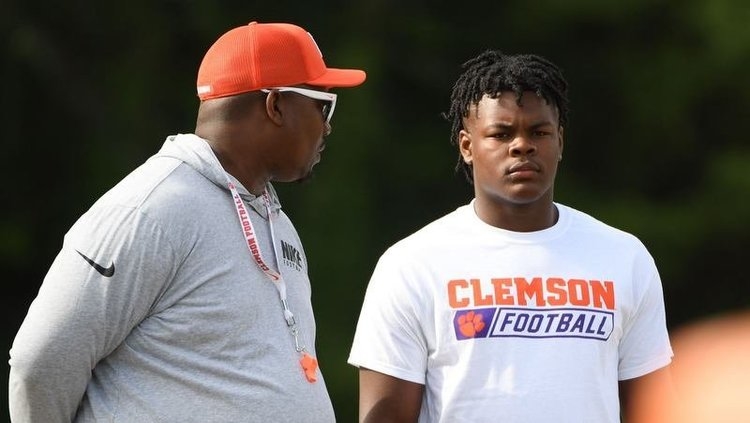 CLEMSON – And just like that, Clemson head coach Dabo Swinney’s annual high school camp is over. The coaches will head off on vacation later this week, but not before meeting to talk about dispensing more offers.

They had plenty to see this week.

I’ll start with the offensive line, where coach Robbie Caldwell has been able to set his eyes on several top prospects. Perhaps the best prospect I saw this week was Dietrich Pennington. Pennington is a 2021 tackle out of Cordova (TN) Evangelical Christian who picked up a Clemson offer after camping last week.

The recruiting process is just unfolding for Pennington who also has offers from USC, Georgia, Arkansas, Ole Miss and Mississippi State. But the Clemson offer really excited him.

Another one I liked was Jared Wilson out of Clemmons (NC) West Forsyth. The 2021 prospect joins Yuosef Mugharbil (2021, Murphy NC), and Ryan Linthicum (2021 C, Damascus, MD) as some others to keep an eye on. Another offer went out to 2021’s Jager Burton after his appearance last week.

*The end of camp didn’t mean the end of the talent. Running backs coach Tony Elliott still had Loganville (GA) Grayson 2021 back Phil Mafah on hand. Mafah continues to impress with his big body and deceptive speed. As one former running back told me out there this morning, he’s the total package.

*We caught up with 2021 pro-style QB Jake Rubley (6-3 185) out of Littleton, CO, who spent this week in the Palmetto State. He worked out with quarterbacks coach Brandon Streeter Tuesday and Wednesday.

The Tigers have yet to offer a 2021 quarterback prospect.

“Clemson is unbelievable,” Rubley said. “Their facilities and coaching staff are some of the best in the country. Offer-wise, I’m not really sure. They said they are looking to offer some 2021 kids here soon, so hopefully, I’m one of them. The first day I thought I played good but not as well as I’d like, but when I came for the second day I really turned it up. I think I showed him them that hopefully I’m good enough to offer.”