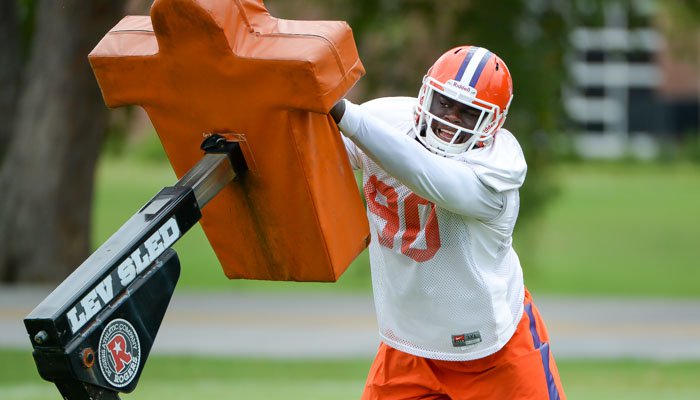 Shaq Lawson and the Tigers ran through an abbreviated practice Monday morning.

Dabo Swinney
Head Coach
View Full Profile knows his team can match any other team in the country from a physical and athletic standpoint, but wants to know if his team can be more intelligent that its opponents.

The Tigers ran through an abbreviated practice Monday morning at Jervey Meadows, and Swinney said the session was dedicated to becoming a smarter team.

“We had a lot of meetings yesterday and last night, trying to learn from the (Saturday) scrimmage. A lot to learn from the scrimmage. A lot of mistakes,” Swinney told the media following practice. “Today that was what this was kind of about. It was all separate. A lot of special teams. A lot of individual - going back to some fundamentals and techniques and what we are trying to do. And again, re-teaching not just what we are doing but why we are doing it and just trying to become a smarter team.

“We are talented, we are fast, we're physical, and I think we are tough. I think we’ve got a lot of guys that like to play, but we’ve got to be smart. That is a huge part of being successful. We’ve got to improve in that area. So that was what this morning was about. We will come back and crank it up a little bit more this afternoon, full pads, and then have another tough practice tomorrow. Got a little bit of live work tonight and tomorrow. They will be off on Wednesday. Then we will have our last scrimmage on Thursday. Then we will start shifting towards the season and getting really focused on who we are going to get ready to play and get dialed in a little more.”

Swinney said the coaches reviewed the film of last Saturday’s scrimmage, and the film revealed that things were better than his initial observation.

“There was a lot more good on both sides than maybe initially, just standing out there on the field. There was really a lot of good things,” Swinney said. “I think sometimes you maybe get caught up with a certain group and maybe you lose sight of what an individual has done because he is a part of that group but man he might be doing his job. So you are repping three groups, and sometimes it can get watered down a little bit. Going back and really watching the tape there were a lot of good things. I thought we ran the ball well offensively. I really like what I saw from our guys upfront in the running game. We got several backs to the safety. Defensively we created some turnovers. We did some good things. I thought we did a really nice job of short yardage. We scored a couple times on defense.

“Again, the guys coming into camp that in my mind that we have to count on, I really feel good about that group of guys on both sides. I think we are heading in the right direction. Outside of that you just got so many guys that are learning how to play and you don't always have 11 guys on the same page. So the play might have been bad but 8 or 9 those guys might have really done a nice job. So it's just going back and evaluating them individually I felt like it was a productive scrimmage. We were better than we were the first time out. Hopefully this Thursday it will be even a step better. I thought Deshaun Watson

Deshaun Watson
So. Quarterback
#4 6-2, 205
Gainesville, GA
View Full Profile was outstanding. He was good the first scrimmage but I thought he was another notch above just in his decision making, his accuracy, and his comfort in the pocket. So a lot of good things.”

“I think we can win with all those guys. That's probably not the answer you want, but that's the truth. I would have no problem with any of those guys we got right now. A healthy Zac [Brooks], C.J. Davidson

Tyshon Dye
RS So. Running Back
#22 5-11, 215
Elberton, GA
View Full Profile . It was great to see him make a couple good runs the other day. He is a guy that just needs a little success. As he gets that I think he will continue to come on for us, but I really would have no problem with any of those guys. Adam (Choice) right now is a guy that is still working his way back from his injury. But what a special talent and player he is. It is a good problem to have. But the biggest thing about that group is there is a great chemistry. I think Wayne has earned the right to be the first guy. But, like I said, I wouldn't lose any sleep with any of them. I think we are in a good situation and they will all have their chance to shine as the season moves along.”

“(Alex) Spence actually had a little better day. I think he was 5-7. (Christian) Groomes has shown he is pretty accurate from about 43 in. Outside of that he has not been as accurate. But Greg (Huegel) had had the best camp coming into the scrimmage, and I think just mentally he didn't handle the day very well. But like I told him, let’s see how you do on Monday. And he came back today and had a great day. He didn't miss a kick. He finished with about a 48-yarder. It's a really good competition, and I think we will be ok. Ammon (Lakip) will rejoin us when school starts and at some point we will get him back. I think we will be just fine there.”

Korie Rogers
RS Fr. Outside Linebacker
#43 6-2, 235
Buford, GA
View Full Profile decided he didn't want to play anymore, so that freed up a spot. He was the unanimous guy amongst the staff. He's a senior and starting snapper. It's fun when you get an opportunity to do that. He's another guy that is a good example to his teammates because (Michael) Sobeski and (Phillip) Fajgenbaum were around here forever. But he never quit. He hung in there even though he had to wait all the way to his 5th year to be the guy. But he kept working, kept preparing, kept believing that one day he could have the opportunity. Then when we got his opportunity, he has done a nice job for us. I'm really happy for Jim and excited he is getting a chance to be on scholarship his last year here.”