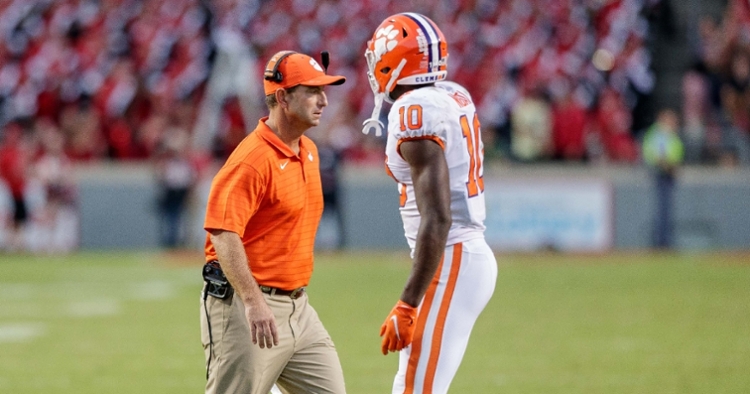 Swinney said it's been a long time since the Tigers have been in this position.

Clemson head coach Dabo Swinney met with the media following Saturday’s 27-21 loss to NC State, and he said there will be more great moments to come. But for right now, it looks like the struggles will persist.

"It's been a long time since we've been in a situation like this, that's for sure," Swinney said after the loss. "We've had a lot of great moments, lot of great times and there's gonna be a lot more to come. But this is where we are right now."

Clemson had 13 penalties for 94 yards – some were drive killers for the offense and some were drive extenders against the defense – and in the end, there were too many mistakes to overcome.

Swinney said the failures of an offense that is averaging just 226 yards per game against Power 5 defenses fall on his shoulders.

“Anxious to watch the tape. Obviously, we struggled in the first half and missed opportunities. Came alive late a little bit,” Swinney said. “We just didn't quite come down with it in the second overtime. We have a lot of work to do, that's just kind of where we are right now. We are not very good right now and that's why we're 2-2. It's my job to get us better."

Swinney said it’s been a long time since the offense has been this inept.

"Zone, counter, power, that's been really good for us for a long time,” Swinney said. “But the criticism is warranted because that's where we are right now. With the way we’ve performed, you’re gonna get criticism and you’re gonna get comments and things like that and you know what? That comes with the territory because the expectation and the standard at Clemson, who we are, we’re not meeting that.”

Swinney said he has a team that now needs to regroup.

“Just a really hurting, hurting locker room and hurting coaches and staff," Swinney said. "We put a lot into this. This is certainly not what we intended. You know, we just got to regroup. That's all I can say. But at the end of the day, you know, I love these guys, love this team, and I'm proud of their effort tonight.

"I've got to help them be better and more disciplined. But I'm super proud of their effort and their heart and their fight the last second. They made one more critical play than we did. But we'll regroup, show up on Monday and get back to work."