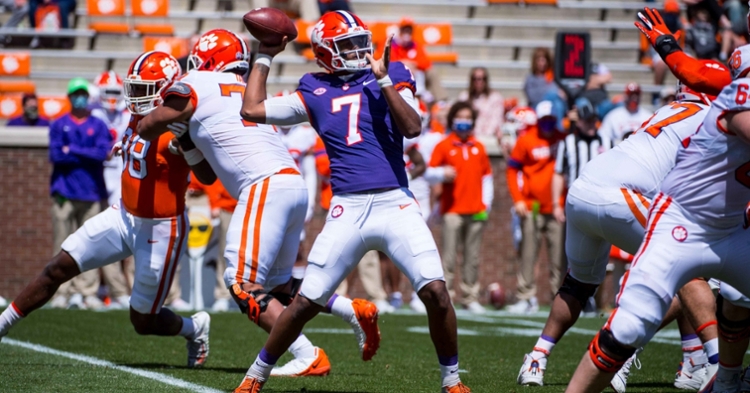 CLEMSON – Clemson head coach Dabo Swinney isn’t quite ready to push the panic button and look for a quarterback in the transfer portal, but he does admit that the Tigers are thin at the sport’s most pivotal spot.

Backup quarterback Taisun Phommachanh suffered what Swinney says is an Achilles tear late in the spring game Saturday, leaving his status for the 2021 season in doubt. That leaves starter DJ Uiagalelei and walk-on Hunter Helms as the only quarterbacks on the roster who have seen game action.

Two signees are set to enroll for the summer in Bubba Chandler and Will Taylor and another walk-on is coming with Billy Wiles, and Swinney said he sees help on the way.

“Obviously, we have Hunter. I thought he did some good things today and he has done some good things this spring,” Swinney said. “He is still a developing guy. We have got three quarterbacks coming this summer. Bubba Chandler is a guy that we are super excited about. We have a lot of high hopes for him. We think he has a high level of potential. And Will Taylor, who is a state champion quarterback and athlete, he is coming in this summer. And we have a young man named Billy Wiles who turned down some Division I offers to come join us this summer as well.

“So, we have three good quarterbacks that we will be adding into the mix, and we will have five guys here. We will evaluate all summer long and see what we have to do to give ourselves the best chance to be successful and hopefully, these guys will come in here ready to go to work and compete. DJ has to have a great summer from a leadership standpoint and he has to help us develop these guys because we can't be out there with those guys this summer.”

Swinney was asked if he could remember a time when the Tigers were this thin at quarterback, and he answered that people have short memories.

“Yeah, just a couple of years ago when we won the National Championship in 2018,” Swinney said. “I think Hunter Renfrow was my third-team quarterback. We have been there before. We have Hunter and DJ and then two coming in this summer in Bubba and Will, and then we have Billy Wiles...Unfortunately, this is not our first rodeo and we are fortunate to have the guys we have.”

Wiles is a 3-star prospect who had offers from schools like Tulane, Old Dominion and UMass. The addition of those three will make for an interesting summer.

“With Taisun down now, instead of six guys out there competing -- we will have five,” Swinney said. “Hopefully, we can get at least three of those guys ready to go compete and ready to go win for us. You got what you got. It is no different than anybody else out there. You just try to put your guys in a position to be successful. You can’t sit around and pout about what you don’t have.

"It is a week-to-week deal. You do the best you can. Whatever it is we have to do to win, that is what we try to do. We load up and try to win the next one. That is all we can do. We are who we are.”