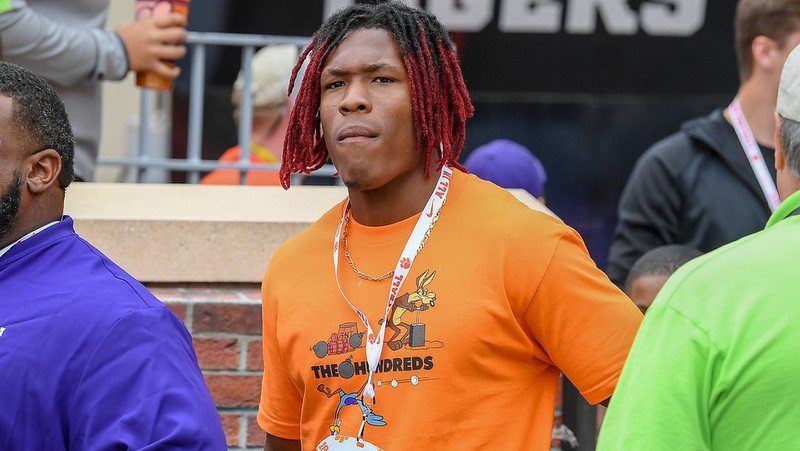 Quavaris Crouch on the sidelines before the game Saturday

The headliner of the group – quarterback DJ Uiagalelei – missed his flight by a few minutes. Uiagalelei, a 5-star 2020 signal-caller out of Bellflower (CA) St. John Bosco had planned a trip to Clemson this past weekend. He was to play his game Friday night at Santa Margarita in Orange County and then, along with his dad, hop a red-eye out of Los Angeles International and fly to Atlanta in time to make it for the NC State game. He would stay over until Sunday before flying back home.

However, things didn't work out that way. "I missed my flight out here and didn't get to go. Ended up missing the flight by like a couple of minutes."

From what we heard, they saw the door to the plane closing while the group was on the run for the gate. Uiagalelei said he's looking at the Duke game next month to visit Clemson. He's going to Auburn in two weeks for the Texas A&M game. As for a decision, Uiagalelei said he's not looking to make one anytime soon.

As for Webb – the 2019 5-star offensive lineman doesn’t really talk to the media, and he showed up late for Saturday’s festivities. Webb didn’t make the usual walk into the stadium with the rest of the recruits and tends to want to blend into the background.

“It was awesome,” she said. “What a great game day atmosphere and the crowd was so friendly.”

That doesn’t give a lot of insight into what Webb is thinking, but I’ve said all along that the Tigers are in good shape. By good shape, I mean that while the coaches aren’t really sure where Webb stands, I think Clemson has a better shot than many people think. He is still on track to make a decision on Dec. 19th and enroll early.

Five-star athlete Quavaris Crouch did make the trip, and he’s another that doesn’t speak with the media. He told us last week that one of the reasons he likes Clemson is because the Tigers have longevity.

I’ve been told that was echoed time and time again this season. He told us last week that it shapes up as a battle between Clemson and Michigan, but Clemson didn’t lose any ground this weekend.

Finally – we are going to try and catch up with most of the visitors as the week progresses – we will end with 2020 OL commitment Walker Parks. Parks camped at Clemson last summer and picked up an offer from the Tigers then. He weighed that opportunity against offers from Kentucky, Louisville, Vanderbilt, Purdue, Northwestern and others and decided Clemson was the place to be.

Parks said earlier that his relationship with offensive line coach Robbie Caldwell was one of the reasons he favored the Tigers.

“I got to spend three days with him,” Parks said after the summer visit. “I love the way he coaches and he’s always making jokes, so practice goes by really fast.”

Parks decided to say no to his hometown Kentucky Wildcats even though his dad played there and his mom also is a UK grad. He is Clemson’s fourth commitment for the 2020 class and the second on the offensive line.

As for the others, we will have more reaction as the week progresses.