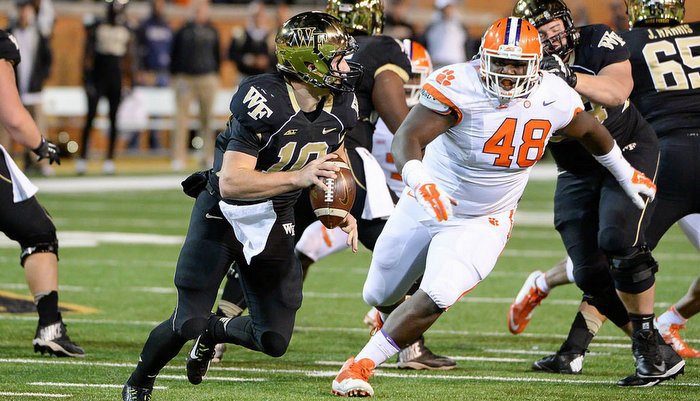 Reader has started four games in his Clemson career

Robert Smith
Sr. Safety
#27 5-11, 211
St. George, SC
View Full Profile . Add in valuable backups along the line and the linebacker spots, and many wonder just how far Clemson’s defense will drop during the 2015 season.

D.J. Reader
Jr. Defensive Tackle
#48 6-2, 322
Greensboro, NC
View Full Profile doesn’t buy into the notion that there will be any drop-off, and he told the media following Monday’s practice that expectations shouldn’t change and that Brent Venables

“I don't think it changes. We all just learned from those guys so much and it's just next man up,” Reader said. “We've always had that next man up mentality, even when somebody gets hurt. So we are just back to the next man up with the new season.”

Reader will likely slip into one of the starting defensive tackle spots, but Reader isn’t a novice – he has played 828 snaps and had four starts during his Clemson career. Because of the experience of so many of the new starters, Reader says he doesn’t expect a drop-off.

“I think the defense will be just as good without really any drop-off,” he said. “There is a lot of motivation for us, especially the guys who played behind the guys who left. We got a lot of playing time and we are really motivated to show people what we can do. You have guys like me, Shaq Lawson

He then said that the defense will spend the spring getting used to the new rotations.

“We all just want to get more familiar with each other,” he said. “And then just continue to work hard and know that those leadership roles will work themselves out. These guys work. That is what I like. There is no drop-off from us working. These guys came in working as soon as they got here, and everybody came in wanting to make a run for the best season we've ever had. That is what we want to do.”

And if the new starters run into any trouble, the former stars are just a quick phone call or text message away.

“Those guys still talk to us. We are all on group text and chat and we talk back and forth,” Reader said. “It's really encouraging knowing that those guys are going to support us no matter what. Those guys push us and they give us tips when they come back. They all came back from training and told us what we need to do.”

When he was reminded that predicting a big season with so many new starters might be a little risky, Reader said he’s seen enough to feel comfortable with putting himself out there.

“I know it's a big statement, but I think we are ready to step up to the challenge,” he said. “We've all been in the system a couple of years now and we have some freshmen, but what is going to help is that a big part of our team is in the secondary. With those guys playing the way they should play it will be good for us up front.”