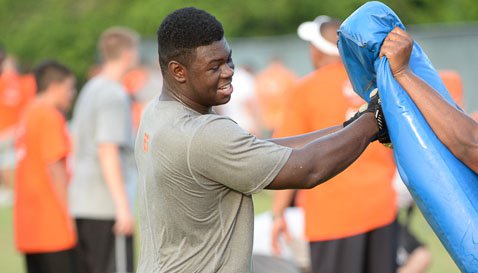 Albert Huggins has had a quiet recruitment to date

View Full Profile out of North Carolina and Greenwood's Gage Cervenka. The best guess is that the Clemson coaches will take as many as three more defensive linemen this cycle.

In the first part of the this two-part series, TigerNet will take a look at five (in no order) of Clemson’s top targets at defensive tackle.

D.J. Jones
Defensive Tackle
6-1, 300
Piedmont, SC
View Full Profile , Scooba (MS) East Mississippi Community College: The Piedmont (SC) Wren product is looking to transfer to a Division I school, where he will have two years of eligibility remaining. Jones took four visits during the spring – Tennessee, South Carolina, Clemson and Auburn – but most think Clemson is the favorite because of the proximity to home and his familiarity with the staff and players. When his junior college career is over, the 6-2, 305-pound prospect should be one of the top prospects.

Trenton Thompson, Albany (GA) Westover: The nation’s No. 1 overall prospect has offers from all across the country, but stealing him away from the hometown Georgia Bulldogs could be a challenge. The 6-3, 293-pound prospect was in Clemson last month and from all accounts enjoyed his visit. Will the visit and his relationship with the coaching staff be enough to overtake the traditional powers – Florida St., Georgia and Auburn?

View Full Profile , Orangeburg-Wilkinson (SC): The Tigers have long been perceived to be the front runner this 6-3, 288-pound prospect. Coming out of high school, Huggins is being recruited as a defensive end, but with his size, he will probably grow into a tackle. The battle for Huggins services have widely been viewed as a Clemson – South Carolina battle, but Georgia, Florida St., and North Carolina may be able to sneak into the picture. Huggins hasn’t been taking visits this spring – indeed all has been quiet on the recruiting front, and he has let the coaches come to him.

View Full Profile , Manassas (VA) Stonewall Jackson: The 6-3, 325 pounder has over 40 offers, but recently narrowed his list down to a top 15, with Tennessee, Alabama, and Clemson rounding out the top three. Clemson will have some ground to make up on Tennessee, but Settle’s relationship with the Clemson coaching and Clemson commit Chad Smith

View Full Profile will definitely work in the Tigers favor. Settle told TigerNet recently that he may give at hint at which way he’s leaning when he attends Nike’s The Opening later this summer. Already a big man, Settle can be effective in both run defense and rushing the passer.

View Full Profile , Lexington (NC) North Davidson: Tuttle is rated as the No. 22 player in ESPN’s 300, and he is listed as the No. 1 player in the state of North Carolina. If the name sounds familiar, it’s because he is the nephew of former Clemson receiver Perry Tuttle. His size (6-2, -308) has recruiters from all across the country knocking on his door. He was on campus last year for the season opener against Georgia, but hasn’t been on campus since that date. The hope is that the coaches can get him back on campus soon – he seems to be a lean to UNC but has also made multiple visits to N.C. State and Tennessee.