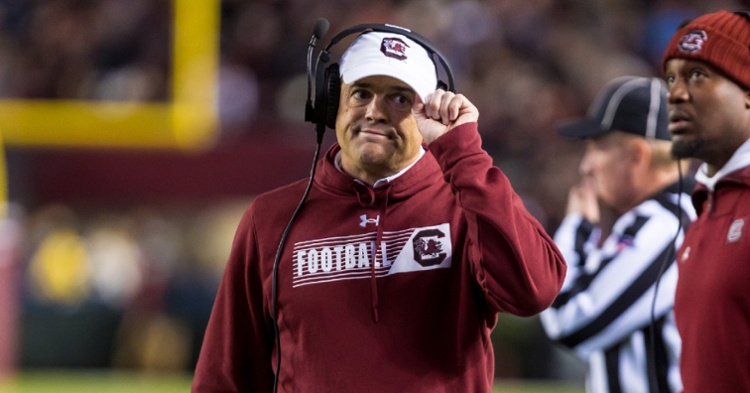 Beamer says he won't have a countdown clock to the Clemson game. (Photo: Jeff Blake / USATODAY)

Shane Beamer has led the University of South Carolina to six wins in his first season in Columbia and is a prime candidate to be the SEC Coach of the Year, but he said Tuesday that he thinks Clemson head coach Dabo Swinney should be in the running for the Coach of the Year in the ACC.

Clemson and South Carolina face off Saturday night at 7:30 pm in Williams-Brice Stadium. The game will be broadcast by the SEC Network.

Clemson is playing its best football of the season and dominated then-No. 10 Wake Forest 48-27 on Senior Day in Death Valley last weekend.

“This is a fantastic Clemson team that is playing their best football. They have gotten better as the season has gone on and won four in a row and six out of their last seven,” Beamer said Tuesday. “Look at what they did against Wake Forest, Wake was ranked in the top ten in the country going into that game and Clemson dominated them. They had 333 yards rushing and 543 yards of offense, 7-of-11 on third down, two running backs that went over 100 yards. And not just over 100, but one went for 191 and the other one went for 113. The quarterback continues to get better every week.

“Defensively, they are all over the place and so much respect watching them play and how multiple they are. I don't how they coach it all because they do so much defensively and it's impressive to watch. They are disruptive. When you are ranked in the top four in the country in sacks and tackles for loss, that is pretty amazing. They are pretty disruptive with their defense. They have fantastic personnel. Offensively, they are getting better each week. They are certainly peaking at the right time.”

Beamer said that Swinney should get credit for leading his team through all of the injuries and should be a candidate for Coach of the Year in the ACC.

“I think Dabo has done an amazing job this season. I think you could make the case that he should be the coach of the year in his conference with the injuries they have overcome all over the field,” Beamer said. “So many new faces this season and they struggled a little bit by their standards earlier this season and they just continued to get better each week. And now they're sitting here at eight wins and they still have a realistic opportunity to win the ACC this season if a couple of things go the right way this weekend. If they get into the ACC Championship Game in Charlotte, I fully expect them to win it if they do. So it's a testament to the great job they've done.”

Beamer said that he understands the importance of Saturday’s game.

“It’s not just another game, let’s be realistic,” Beamer said. “We understand what this game means to the people of this state and to the people in each program. You do have to be careful about putting it too much on a higher pedestal than the other games. I know there are some programs out there across the country that have a countdown clock for this rivalry. We will never, ever, ever, ever do anything like that here at Carolina. That’s no disrespect to Clemson.

“We talk all the time about nameless, faceless opponents and treating everybody the same and us being our best each week, not worried about the opponent. I’m not an idiot, and I understand this is an intense rivalry and for the players and coaches on both sides, it’s different. But it’s not any less important than playing Georgia, and it’s not any more important than playing Troy from our preparation standpoint.”