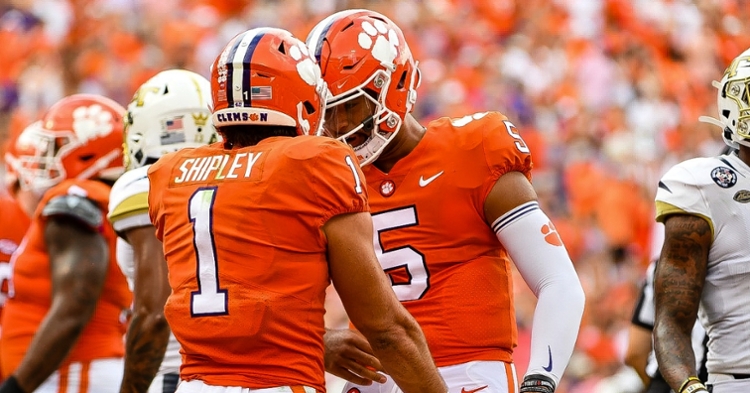 Shipley and Uiagalelei did hit some yards on the ground.

CLEMSON – Tony Elliott hopes his offense takes away confidence after a second-half touchdown that allowed No. 6 Clemson to escape Death Valley with a weird 14-8 victory Saturday. Will Shipley says the offense is a play or two away from being really good. DJ Uiagalelei feels like the offense is ready to break out. For the majority of Saturday’s game, it didn’t feel that way.

Clemson had just 284 total yards – 127 yards in the first and 157 yards on the second half – but was also limited to just eight drives (a normal game might see somewhere between 12 and 14). Elliott said the lack of chances hurt offensive flow, Georgia Tech’s defensive “structure” didn’t allow for deep throws, and mistakes cost the offense the chance to finish drives.

“Really, really proud of our guys because we prepared for who we thought they were going to be, and they came out in a structure that was completely different than what we've seen. We've only seen that do that one other time,” Elliott said. “I thought the guys did a good job of settling in, especially in the second half, in doing what we needed to do. Structurally, they weren't going to give us the big play. They were going to make us be patient. But we are still leaving too many points on the field. You look at the situations, we felt like we were playing an option team because of the number of possessions. We only had eight possessions and put together some good drives but didn't finish them. Down there in the red zone we had a fumble and we got stopped on a fourth down. No sacks, so there are some positives to build off of, but there is going to be some things we can learn and grow from.”

Clemson’s offense has scored just 17 points in eight quarters against FBS foes, and I asked Elliott if the issue was the offensive line, quarterback play, wide receivers, or play calling.

“I think it's the turnovers and critical mistakes and not coming up with plays. We had a play there in the first half where we had receivers coming open, and we triggered it just a little bit quick on third down,” Elliott said. “And then we had a situation there in the second half where we get a ball to (Justyn) Ross and he doesn't come down with it. So it's a combination of a lot of things. But this game, it was the structure of what they were doing. They said we are going to give you a three-man front, drop eight in coverage and not give you anything over the top. We are going to see if you can be patient. So our whole game plan had to change once we saw they came out in a structure that was different than we were anticipating.”

The Tigers forced a turnover on downs with just 13 seconds remaining in the game but were backed up in their own end zone. Uiagalelei was not under center but instead was in the shotgun, and Elliott said it’s the same thing Clemson has always done.

“Coach (Swinney) talked about in that situation that we wanted to draw them offsides. We haven't been much of an under-center team in the past, so we are going to do what we did,” Elliott said. “We hand the ball off and there is a fumble. If we just get out of the endzone and there is no fumble then the game is over. Also, too, do you take a slow safety there and then kick it off with just a few seconds left. So we tried to draw them offsides that first and got the delay of game and then we came back and tried to do what we do.”

Elliott said he is proud of his team and he hopes they gain some confidence after the win, but he also knows there are plenty of things to clean up. He was then asked why the offense didn’t take more shots down the field.

“We took a couple of shots, but at the same time we were just trying to stay efficient and effective. If you take a shot maybe you get a PI,” he said. “But at the same time, they were squatting hard and changing some of the coverage reads at the line of scrimmage. It was a lot of cat and mouse. Hats off to Georgia Tech, they had a good plan and stuck with their plan. It was different than what we were expecting going into the game and it took us a little while to get adjusted.”