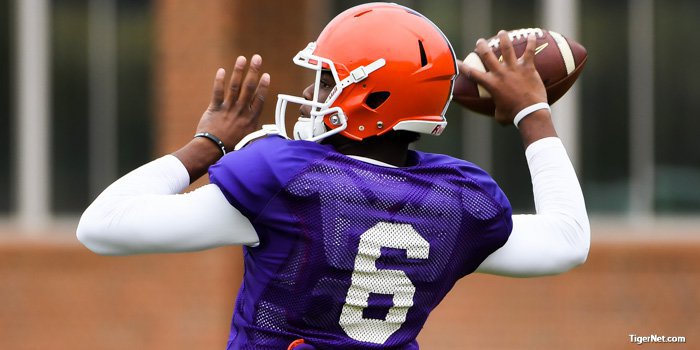 CLEMSON – Practice is underway for Clemson’s date with Ohio St. in the Fiesta Bowl, and the media was allowed to watch the first four periods and we came away from that limited time with a few observations.

We will start with the quarterbacks. We haven’t been able to see redshirt freshman Zerrick Cooper since the start of fall practice, and he looks even better than he did in August. We watched him go through the first part of drills, and it amazes me how much his release looks like Deshaun Watson’s. His follow-through and the zip he has on the ball look a lot like Watson at the same stage.

I was also impressed with his footwork and accuracy. They do a drill where you chop your feet through the bags, then do a spin move and throw coming out of the back part of the spin. He hit the net every single time.

Tucker Israel also looks a lot better than he did in the first part of fall practice. More comfortable is the word I would use. He knows the drills and he trusts his legs now, so he was able to throw free and easy and it’s obvious he is right there in the accuracy department. Both will give Kelly Bryant a run in spring practice.

Santa Claus is Coming to Town

The first part of practice was held with that iconic Christmas song blaring from the speakers, and one player to turned to another during stretching and bemoaned the fact that the song reminds him he hasn’t done any Christmas shopping.

I also wanted to go over and spend some time watching the younger linebackers. I cracked up in the first part of the drills because Ben Boulware was complaining about having his beard pulled. It’s getting long, but I'm guessing he won’t shave until after the season.

We’ve seen Tre Lamar all season, and when he competes in drills his size and athleticism jump out at you. But I saw a different Shaq Smith out there today. A lot of people were surprised when Smith redshirted this season, but it’s obvious he has put his time to good use in the weight room. I don’t know if it’s possible that he’s grown taller in just a few months, but he looks taller and thicker. He was explosive in drills, but the best thing I saw came a few minutes in.

Linebackers coach and defensive coordinator Brent Venables had them simulating a release from an offensive lineman and then rushing to make a tackle, and following one of the drills Boulware took Smith aside and spent a few moments doing some 1-on-1 coaching. That kind of leadership will be hard to replace when Boulware leaves after this season. It’s also good to see an older player giving time and pointers to the kid that is probably his replacement.

I also took the time to watch Jamie Skalski and Chad Smith. It’s obvious both of these kids are gamers, and they go through the drills with a smile. In fact, the harder somebody hits Skalski or the harder he hits someone, the more he laughs. Head coach Dabo Swinney mentioned Spencer Shuey in his press conference earlier in the day, and I can see some similarities between the two.

And Chad Smith? He’s gonna be a good one.

Offensive lineman John Simpson was practicing and he looked like he was moving around fairly well. Redshirt lineman Chandler Reeves was jogging around under the watchful eye of Larry Greenlee, and he is moving really well and looks like he might be ready for the spring.

Defensive linemen Richard Yeargin and Scott Pagano were also going through drills with no problem, and both of them will give the Tigers depth against the Buckeyes.

More to come after practice.