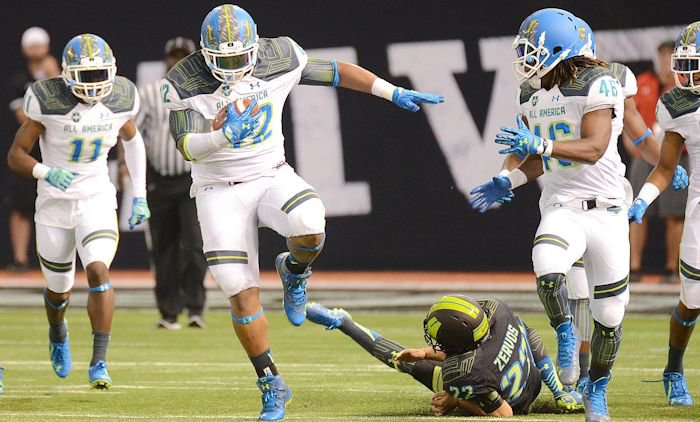 One longtime Clemson commitment texted the Tigers’ newest commitment Monday afternoon, and the message he received back was short and to the point but good news for Clemson’s coaches and for the 2015 recruiting cycle.

The message was simple: Christian Wilkins

View Full Profile is happy to be a Clemson Tiger.

Wilkins, a 4-star defensive tackle prospect out of Suffield (CT) Suffield Academy gave his verbal commitment to Clemson Monday, becoming the Tigers’ 21st member of the 2015 recruiting class. He is the 13th ESPN 300 player for the Tigers in this cycle, which is two more than FSU and more than 10 other ACC teams combined.

“I was just texting him. I was really happy about it. He is going to be an incredible player,” Williams told TigerNet. “He was saying that he is doing really good and he is happy to be a Tiger.”

Williams said Clemson is getting a special player in Wilkins.

“He is a really genuine and good guy. He is a smart football player and he has a lot of upside,” Williams said of his future teammate. “He is just a big guy, and he played incredible all week. He had two sacks and returned a blocked PAT for two points at the other end. I can’t wait to get up there and play with him. He is going to be a really good player.”

Many experts predicted Wilkins – who picked the Tigers over Penn St., Ohio St. and Boston College – would stay closer to home. However, Clemson’s coaches felt confident about the possibility of landing Wilkins after he spent time with the Tigers’ current crop of commitments at the Georgia St. home game in late November.

Wilkins donned a purple Clemson sweatshirt and mugged for the cameras with Clemson’s 2015 class, and got to know linebacker Chad Smith

View Full Profile better. Smith is known as one of Clemson’s best recruiters when it comes to other prospects, which apparently helped in the long run.

View Full Profile III at the game in Tampa last week. Williams still didn’t know if Wilkins would wind up a Tiger, however.

“Just talking to him, I felt like Clemson had a chance,” Williams said. “I couldn’t tell if we were the leader or not, but I felt like we at least had a chance. I talked to him over the week and got to know him, and I am really glad he picked Clemson.”

ESPN recruiting analyst Tom Luginbill told TigerNet that Wilkins was the one that stood out to him last week.

“He may have been the biggest surprise of all the defensive linemen at the Under Armour game because he showed that he wasn’t overwhelmed by the jump in competition,” Luginbill said. “He embraced it instead and rose to the occasion.”

“He’s a very special young man and we are really proud of him. He is a true scholar-athlete and a very humble and thoughtful young man,” Cahn said. “It’s been apparent since we were fortunate enough to get him to Suffield four years ago. I just can’t emphasize what a thoughtful and happy-spirited young man he is. He is a man of tremendous integrity with an effervescent personality and he has been an asset to our community in all ways.”

Today I would like to announce my verbal commitment to Clemson University. #wetoodeep #onceatigeralwaysatiger #42 pic.twitter.com/ZjvpUFgydN

Wilkins will remain a Tiger as his high school's mascot is also a Tiger.

With @cwilkins42’s pledge today, #Clemson has 13 #ESPN300 commitments. That’s two more than #FSU and more than 10 other #ACC teams combined.