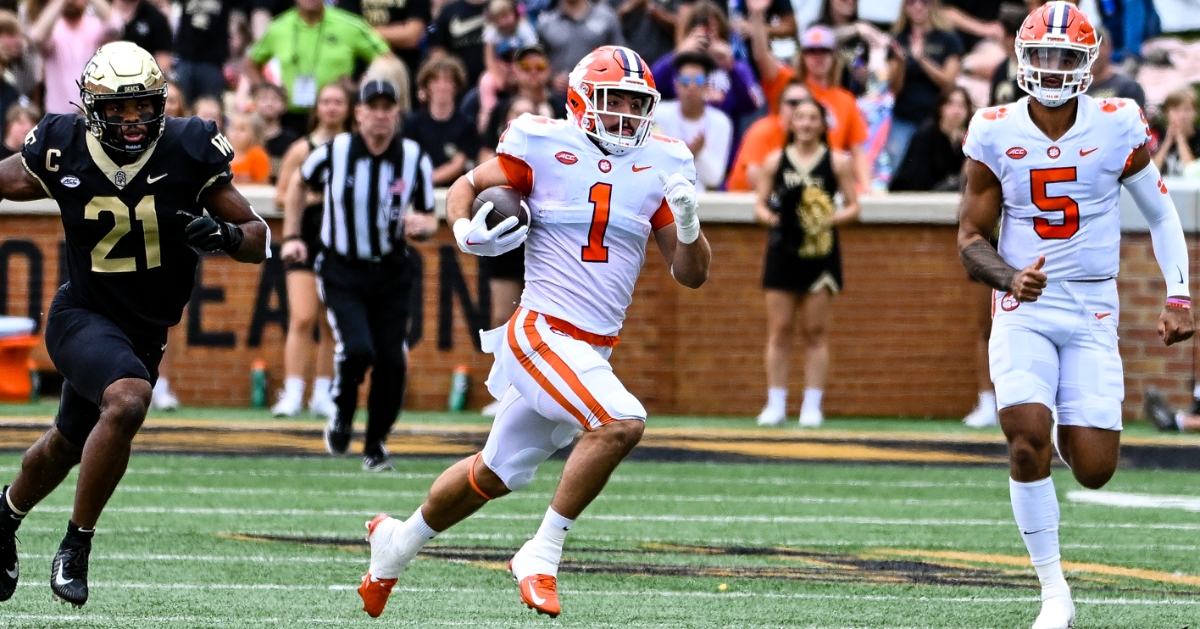 Will Shipley was hurt in last year's game at NC State and he's made an impact all over the field early this season.

Clemson’s tour through the Atlantic Division continues on Saturday with a top-10 matchup facing No. 10 NC State under the Death Valley lights.

After winning a divisional slugfest last week at Wake, Dabo Swinney’s Tigers can take another big step toward an ACC Championship Game return by getting some revenge against the Wolfpack.

NC State came out on top, 27-21, in double overtime to effectively end Clemson’s Playoff chances last year with a second September loss. Now both teams enter undefeated with big-time aspirations that can be greatly boosted with a victory Saturday.

Here’s a snapshot of the teams through those four wins each:

Clemson’s defense judged against preseason expectations is starting to catch up in rankings like ESPN’s SP+ formula, where the Tigers slipped six spots to No. 13 overall this week with more data dropping the defensive group to No. 19 overall.

NC State has seen similar slips with an offense that isn’t up to preseason expectation and ranked no higher than 53rd – and down as low as 88th (FPI) – in the metrics. The defense, returning the majority of its starters, has lived up to the hype and holds a pair of top-10 metric ranks.

The storyline out of Winston-Salem is about as much about DJ Uiagalelei and the Clemson offense as the defensive issues, with Uiagalelei’s resurgence guiding a Tigers offense among the best in the league and top-25 nationally.

Defense was the story going into last year’s matchup and neither offense scored more than once per half, but a pair of missed field goals – both of 50-plus yards – did hurt the Wolfpack’s efforts to win in regulation.

Improved offensive efficiency on Clemson’s end would certainly be welcome after a paltry 29% success rate and zero successful plays in the third quarter of that double-OT loss. Clemson had only two passes of 20 or more yards and the Tigers’ runs were stuffed at a rate 13% higher than the national average at that point. Clemson also lost Will Shipley to injury in that game to hurt that effort. The Tigers had seven passes of 20-plus yards and Shipley rushed for 104 yards against Wake last week (53 coming on his opening carry).

Brent Venables’ defense contained any NC State explosiveness with only one run of 12-plus yards and the only pass of 20-plus yards coming on the go-ahead touchdown in double OT, although they came close on some other deep shots. They finished with a 4.2% big play rate against a Clemson defense that was missing Tyler Davis pregame and then James Skalski and Bryan Bresee in-game.

1. QB Devin Leary - Wake Forest almost received the all-world game out of its QB to pull off the upset last week, and the task is no different for Leary if the Clemson offense continues to keep up its efficiency. Leary ranks 137th on PFF in passer grade (66.6; compared to 90.4 and 8th for DJ Uiagalelei) after finishing 28th in the stat last year (80.5). Under pressure, he has a 22.2 completion rate and a 34.6 grade with 4.2 yards per attempt, while he holds a 71% completion rate “kept clean” with eight touchdowns to two interceptions and a 75.7 grade. That’s a small sample size with just four games in, but he averaged 7.2 yards per attempt under pressure last year and graded out at 81.6 facing the blitz with 18 touchdowns to one interception (49.3 grade/5.9 YPA/4 TD-2 INT/49.3 grade when blitzed this year). He is averaging a big-time throw – by PFF’s calculus – every 22 dropbacks this season, compared to every 15 last year.

#NCState QB Devin Leary isn’t playing nearly at the same level he was last season, but Saturday’s game against #UConn was his most complete and efficient game this season.

Only missed 12 passes, four touchdowns, showed off some pocket movement and eye deception as well. pic.twitter.com/CwMu4oxDol

2. RB Demie Sumo-Karngbaye - Sumo-Karngbaye has emerged out of nowhere really to be an impact player early this season with a 77.6 grade overall offensively, tallying 252 rushing yards at 6.5 yards per carry with three scores and 102 receiving yards and a TD. His 83-grade as a runner ranks third in the ACC and 26th nationally (min. 25 snaps).

Demie Sumo-Karngbaye had several angry runs today, but this was just ridiculous. Slimy Shark has RB1 written all over him. pic.twitter.com/uvmTlerc89

3. CB Tyler Baker-Williams - One of the bigger matchups may be Baker-Williams versus Clemson freshman Antonio Williams in the slot, as Baker-Williams paces a veteran defense in overall defensive grade (87.9) and in coverage (83.8) with only two catches for 13 yards allowed in 69 coverage snaps with two interceptions. He had a pass breakup in 33 coverage snaps against Clemson last year and 9.3 yards per catch allowed in seven targets his way (three receptions). Baker-Williams did sit out the UConn game due to injury and was tagged as “day-to-day” by Doeren, but he was listed on the depth chart this week.

Most INTs among ACC DBs so far:

Analysis: The models are understandably cautious on picking Clemson to top the spread, as it hasn’t done so in the last three outings after a late TD topped the number in the opener against Georgia Tech.

There’s also the moving target that is gauging how much weather from the remnants of Hurricane Ian could affect the gameplay – and that combined with what we saw out of the teams last year – provides a very low over/under total of 40 at the moment.

NC State is 2-2 against the spread after struggles at East Carolina in the opener, strong home efforts against Charleston Southern and Texas Tech, and hitting cruise control against UConn in a 41-10 victory. They were a 10.5-point underdog going into last year’s game with Clemson.

Clemson owns the nation’s longest home winning streak (36) and hasn’t lost at home to NC State since 2002, and after last year’s struggles early, in particular, the Tigers did cover the number in the final two ACC games, one against a No. 10-ranked Wake Forest, 48-27.

Per ESPN, Clemson is 19-7-1 against the spread versus AP top-10 teams under Swinney and 9-2 ATS versus ACC AP Top-10 teams, while NC State is 4-12 ATS in road games since 2019. And just based on what we’ve seen so far, picking Clemson by seven looks like the call for what should be a charged atmosphere on Saturday night.

1. NC State - The Wolfpack boasts the top-rated defense in the league and a preseason ACC player of the year QB in Leary who is still looking to break out (85th in ESPN’s QBR rankings).

2. Florida State - Turns out that QB Jordan Travis is just fine and now the unbeaten Seminoles are in the top-25 in the traditional polls and hold a top-25 spot in the ESPN FPI (22).

3. Notre Dame - Notre Dame’s first foray into ACC action was an offensive explosion with 576 yards and 45 points in a win as an underdog at UNC – they’re still the second-best team on the schedule left after NC State according to the SP+ formula (13.9 rating behind a 15.3 for NC State and 17.2 for Clemson).

4. Syracuse - The Orange survived a four-turnover effort to stay unbeaten and find a way into the top-25 rankings this week with a 22-20 home win over a struggling Virginia team.

5. Louisville - If Louisville played like it does against directional Florida schools each week, they’d be higher on this list after a 41-3 defeat of South Florida.

6. Miami - The former Big East powers in the Coastal are in a race for who can post a more embarrassing loss and the ‘Canes falling by two scores to Middle Tennessee at home – and never being competitive – is a pretty lofty effort.

8. Boston College - BC is just not a competitive football team at the moment – without a win or a non-garbage time, fourth-quarter score versus a Power 5 opponent in three tries.

The pass rush kicked in juuuuuuuuuust in time to make the difference for Clemson. Big bummer for the Deacs. pic.twitter.com/KXiuE1PzG9