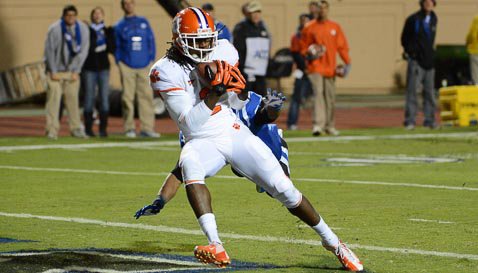 If Clemson goes on to have a great end of the season this year I think we may look back to a four-series sequence late in the first half and early in the second half as a key catalyst.

Clemson was up by only seven points after struggling four consecutive drives.  The Tigers had just gone for it on fourth down and did not convert.  Virginia took the ball over near midfield and it looked like the Cavs had a good chance at tying the game at 14.  Clemson had struggled at times in the previous three games and this one could have been another struggle.

Jayron Kearse
Fr. Safety
#20 6-4, 205
Fort Myers, FL
View Full Profile intercepted a UVA pass. Then the Tigers took advantage of the good field position, and they scored on a seven play, 33-yard drive that ended with a 10-yard touchdown pass to Roderick McDowell

The Tigers moved the score to 28-7 with a five play, 50-yard drive that ended on a 25-yard run by McDowell.

Clemson could have gone on to a good win, but the next two drives turned this one onto a great win and possibly gave this team momentum into November.

The Tigers took the ball over at their own 14-yard line up 28-7 with only 55 seconds remaining.  Instead of running out the clock, the staff decided to stay aggressive.  Boyd hit Mike Williams

Mike Williams
Fr. Wide Receiver
#7 6-5, 205
Vance, SC
View Full Profile for an 11-yard gain on the first play of the drive.  That was followed with a seven yard pass to Germone Hopper

The eight-play, 86-yard drive lasted only 42 seconds and put the Tigers up 35-7 at the half. It also provided confidence.

The final drive in the sequence ended with a 96-yard masterpiece from Boyd to Watkins that moved the advantage to 42-7 and sent many Cav fans home.  It was the second longest play from scrimmage and the second longest pass play in Clemson history. The only one longer is a 97 yard pass from Mark Fellers to Craig Brantley against Virginia at Clemson in 1974.

The four-drive sequence ended Boyd and Watkins' night, but it may have started something even bigger.

Clemson moved to 8-1 with the 59-10 win, the same score of the Virginia-Oregon game in September.  It was the largest margin of victory for the Tigers in an ACC road game since a 55-0 win at Virginia in 1984. It was the second time this year Clemson won by 49 points; the other was a 56-7 win over Wake Forest at Clemson. It tied for the fourth largest victory margin anywhere for the Tigers in an ACC game.

Boyd completed his first nine passes of the game for 135 yards and a touchdown. He finished 24-29 for 377 yards and three touchdowns. He had passing efficiency of 219, his third over 200 this year and third best this year.

Sammy Watkins
Jr. Wide Receiver
#2 6-1, 205
Fort Myers, FL
View Full Profile during Clemson’s first possession and the fifth play of the game. He now has 116 yards in his career, 93 passing and 23 rushing.

Watkins finished with eight catches for 169 yards on the day and two touchdowns. He was one of 12 Tigers who caught passes for a combined 435 yards through the air.

Kearse had a pick and a caused fumble to lead the defense.  The rangy safety continued to make a difference in a secondary that may have played its best game of the season.  In fact, this may have been the Tigers' most complete game of the year also.

Maybe this is the catalyst to a great November.