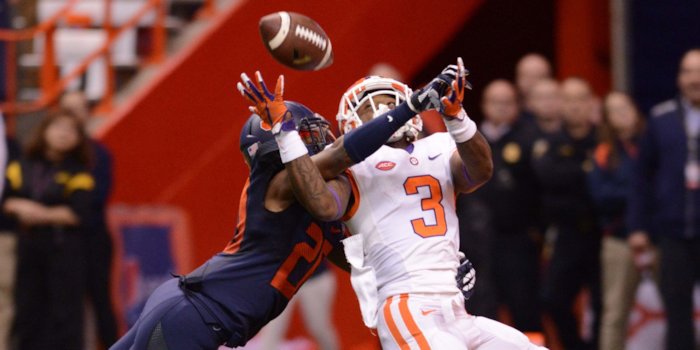 This game was not pretty, but you will never hear me complain about wins. As long as we come out with a W, I will take five more as ugly as this game this season. Saturday’s win improved Clemson to 10-0 for just the third time in history. The other seasons were 1948 and 1981.

The game couldn't have started any better. Deshaun Watson hit Charone Peake on the first play of the game, and Wayne Gallman scored a touchdown on the second play from scrimmage. Syracuse fumbled on its first play, and the Tigers quickly raced to a 14-0 lead.

Fumbles by Kelly Bryant and Hunter Renfrow helped give Syracuse a chance, and the Orange turned this one into a fourth-quarter game.

You have to give Syracuse a lot of credit for a terrific game plan of misdirection and option football on offense. At times, Clemson's defense was on its heels and looked confused. As a result, the Orange took advantage with huge chunk plays in the running game. Syracuse out-gained Clemson in the running game 242-210. Syracuse averaged 7.1 yards per carry.

The Tigers turned the ball over three times and had some red zone issues.

Defensively it was not all bad news. The Tigers held Syracuse to 322 yards and only 80 through the air, including just eight completed passes. Syracuse was just 3-13 on third downs. But the fact the Syracuse has struggled all year on offense, and the fact that they were playing with a reserve quarterback does give some concern for Clemson moving forward.

Another concern is the special teams. Clemson's punt team has gotten progressively worse this season and the kickoff return unit is as bad as I have seen in recent years.

Offensively Watson was on form again. The sophomore went 34-of-47 for 360 yards for two touchdowns and one interception through the air. He carried the ball 13 times for 101 yards. The Tigers needed his rushing yards because Syracuse did a nice job of holding Wayne Gallman to just 66 yards on 15 carries. Watson produced 461 yards of total offense Saturday, the highest total of his career. His previous high was 442 this season against Boston College. Clemson totaled 566 yards on offense, a sixth straight game with at least 500. That is a school record.

Clemson's passing game yielded some big numbers for the receiving corps. Artavis Scott led the Tigers with 12 receptions for 73 yards. Peake led Clemson in receiving yards with 120 on seven catches. Deon Cain had a touchdown reception for the third straight game and caught four balls for 67 yards.

Ugly wins are still wins. Saturday saw four of the top ten teams in the country fall, and we can be thankful that Clemson was not among them. Maybe another positive that came out of Saturday was the idea that Clemson faced a surprisingly vocal crowd in the dome and came away with a win, despite being tested n the fourth quarter.

And perhaps the lasting memory of the Tigers tenth win this season is something we already knew. As long as Deshaun Watson is your quarterback, you have the best player on the field at the most crucial position.

Clemson has won 13 consecutive games over two years, tied for the second-longest streak in school history and the longest for the program since 1980-81. Only Ohio State had a longer active streak entering today.

The Clemson offensive co-coordinator team of Tony Elliott and Jeff Scott is now 11-0 since taking over the leadership of the offense for last year’s bowl game against Oklahoma.